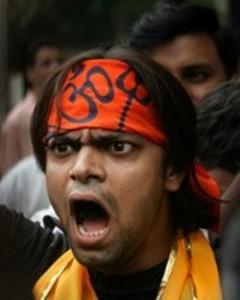 Whatever has happened was not unexpected. The fear of it was already there because Congress’s soft-Hindutva policy is not hidden from anyone. But still there was some hope that such a move will not be made as, on the face of it, there was no need of this issue [of saffron terror] being brought up at the AICC’s session at Jaipur. And the manner in which the Home Minister brought up the issue gave the impression that UPA Government was equipped with all the necessary tools required for and was determined to cut the BJP to size. But, alas, the fear proved to be true and the hope got defeated

In view of BJP’s threat to disrupt the Budget session of the Parliament Suhsil Kumar Shinde’s “regret”, which is an apology, carries several connotations and nuances with it. Despite enjoying political strength, by offering apology the ruling alliance the Congress has accepted its defeat and has proved that it is weak and is at the mercy of the opposition. It means that only if the opposition so desires can the Parliamentary proceedings be allowed and if it decides not to allow the Parliament to run smoothly then the Government has no mechanism to bring the opposition on the right track.

This will also mean that, having succeeded and having won in its protest, if the BJP—or, indirectly the RSS—may also demand that the names and identities of Samjohta Express, Maligaon, Mecca Masjid, and Ajmer blasts accused should not be made public so that it is never known to the public which of the saffron organisation they belong to. They may also ask that the accused be presented as individuals and the names of their backers and the organisation working behind them are not revealed. In such a scenario will the Home Minister apologise for having revealed the detailed identities of the accused? This would simply mean that it is alright to publicise family genealogy of Muslim suspects while nothing, except their names, be revealed of saffron accused so that saffron network may remain intact and continue with its programme.

Shinde’s apology is yet another proof of Congress’s soft Hindutva. Perhaps the Congress and its allies were worried about the consequences of the truth that had come out in Shinde’s Jaipur statement. This may be the reason why the Congress thought it appropriate to surrender before the BJP but did not realise the immense humiliation for the parties in UPA specially to Congress’  self-projected image with reference to freedom struggle. It would have been more honourable to show steadfastness and sacrifice the government than apologising for a truthful statement made in Jaipur. Perhaps they do not remember the saying that it is better to live for one day like a lion than to live for a hundred years like a jackal.