Through his farewell address to the people of India, including a large posse of the youth – delivered at Siri Fort auditorium built in the yesteryear’s campus of Alauddin Khilji’s Fort in Delhi – US President Barack Obama clarified in no uncertain terms that his concurrence to lift the level and intensity of US-India relations to a higher orbit is patently conditional. 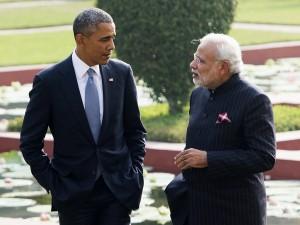 ‘My confidence in what our nations can achieve together is rooted in the values we share’, Obama candidly announced and went on to elucidate this conditionality, ‘in big and diverse societies like ours, progress ultimately depends on something more basic, that is how we see each other. We are strongest when we see the inherent dignity in every human being.’

Obama reminded the India that on 26th January, with the tricolor waving above, he joined it in celebrating the strength of its Constitution that begins with the pledge to uphold the dignity of the individual. He pointed out, ‘Your Article 25 says that all people are equally entitled to freedom of conscience and the right to freely profess, practice and propagate religion’. Generations have worked to live up to these ideals and upholding this fundamental freedom is the responsibility of the government, as much as of every person.

He went on: Its important to realize how we treat each other, people who are different than us, how we deal with diversity of beliefs and of faiths.  Every individual’s dreams, their hopes, are just as important, just as beautiful, just as worthy as anybody else’s. The point is that the aim of our work must be not to just have a few do well, but to have everybody have a chance, everybody who has the ability to dream big must have opportunity to reach its fulfillment. Our nations are strongest when we uphold the equality of all our people, he emphasized.

Obama was impressed to watch on Delhi’s Rajpath ‘the pride and the diversity of this nation’. He realized that the sight of an American President as chief guest on India’s Republic Day would have once seemed unimaginable.  But ‘my visit reflects the possibilities of a new moment’.  He believes that the relationship between India and the United States can be one of the defining partnerships of this century and ‘today, I want to speak directly to you – the people of India – about what I believe we can achieve together, and how we can do it.

Obama recapitulated the cherished conviction of Mahatma Gandhi and Martin Luther King in the ‘struggle for justice and human dignity’ and the belief of Swami Vivekananda in the ‘divinity in every soul and the purity of love’. Under their inspiration both USA and India threw off colonialism and created constitutions that began with the same three words “We the people’ and, consequently, kept on climbing up the stairs of progress including trips to the Moon and Mars. Indians and Americans are some of the hardest working people on Earth, he noted, and that America has the largest Indian diaspora in the world, including some three million Indian-Americans.

For all these reasons, he hoped, America can be India’s best partner. However, he cautioned, ‘Only Indians can decide India’s role in the world.  So here in New Delhi, Prime Minister Modi and I have begun this work anew.  America wants to be your partner as you lift up the lives of the Indian people’ and provide greater opportunity be it civil nuclear agreement, more electricity for Indians, better technology, renewable energy, cleaner vehicles on the road, more filtration systems on farms and villages, young healthy people, more trade and investment, new infrastructure, roads, airports, ports, bullet trains, smart cities, increased collaboration between our colleges and universities, encourage young entrepreneurs who want to start a business, take measures against human trafficking, confront the challenge of climate change, ensure our mutual security, stronger defense and enunciate greater role for India in the Asia Pacific. As icing on the cake, Obama expressed his intention to support a reformed United Nations Security Council that includes India as a permanent member.

For extending these multiple offers the US President used the epithets like we ‘want’ to be your partner, we ‘can’ do these together, ‘if’ we’re going to be ‘true’ global partners, ‘with power comes responsibility’, and so on.

Having said all this, he clarified that the basic purpose of his farewell address is to share with the people and the government of India the sine qua non for all this to happen. He displayed confidence that universal experience suffices our two countries to know what makes nations strong.

Going deeper into the seriousness of his proviso, Obama said that our nations are strongest when we see that we are all God’s children – all equal in His eyes and worthy of His love.  Across our two great countries we have Hindus and Muslims, Christians and Sikhs, and Jews and Buddhists and Jains and so many faiths.  And we remember the wisdom of Gandhiji, who said, that the different religions are beautiful flowers from the same garden; branches of the same majestic tree.

Nonetheless, he regretted that no society is immune from the darkest impulses of man.  And too often religion is used to tap into those darker impulses as opposed to benefiting from the light of God.  He reminisced that three years ago in the American state of Wisconsin a man went to a Sikh temple and, in a terrible act of violence, killed six innocent people – Americans and Indians.  And in that moment of shared grief, the two countries reaffirmed a basic truth that must again be done today – that all persons have the right to practice their faith how they choose and to do so free of persecution, fear and discrimination.

The peace we seek in the world begins in human hearts, Obama stirred up the people of India. It finds its glorious expression when we look beyond any differences in religion or tribe, and rejoice in the beauty of every soul, he continued.  And nowhere is that more important than India, he forewarned.  Nowhere is it more necessary for that foundational value to be upheld. ‘India will succeed so long as it is not splintered along the lines of religious faith and is unified as one nation’, he admonished us.

For that to happen Obama prescribed the recipe: Do we act with compassion and empathy?  Are we measured by our efforts – by what Martin Luther King called “the content of our character” rather than the color of our skin or the manner in which we worship our God?  In both our countries, in India and in America, our diversity is our strength.  And we have to guard against any efforts to divide ourselves along sectarian lines.  And if we do that well, if America shows itself as an example of its diversity and yet the capacity to live together and work together in common effort, in common purpose; if India, as massive as it is, with so much diversity, so many differences, is able to continually affirm its democracy, that is an example for every other country on Earth.  That’s what makes us world leaders – not just the size of our economy or the number of weapons we have, but our ability to show the way in how we work together, and how much respect we show each other, Obama tipped us off.

He specifically appealed to the Indian youth, ‘prejudices, stereotypes and assumptions – those are what happens to old minds; that’s why young people are so important in these efforts’.

Obama had no qualms to observe that India and USA are not perfect countries. But the reason of his optimism about ‘our future together’, is that, despite our imperfections, our two nations possess the keys to progress in the century ahead.  We vote in free elections.  We work and we build and we innovate.  We lift up the least among us, he reiterated. We respect human rights and human dignity, and it is recorded in our constitutions. And we keep striving to live up to those ideals put to paper all those years ago.

And we do these things because our moral imaginations extend beyond the limits of our own lives.  And we believe that the circumstances of our birth need not dictate the arc of our lives.

Thus, the undisputedly most powerful world leader of today did not let diplomacy take the better of the American conscience and did not mince words to announce in unambiguous terms that the price of world leadership is a high level of genuine intra country religious harmony. Surely, this would have appealed to the statesmanship of PM Narendra Modi and the sagacity of all our peace loving people.

The author is President, Zakat Foundation of India ZakatIndia.org.

Slightly shortened Urdu version of this article appeared in daily Rashtriya Sahara, 29 January 2015. English version has been provided by the author.