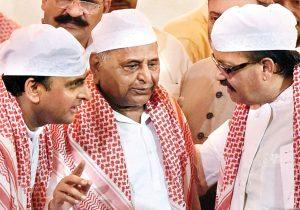 Launching a book on himself the leader of Samajwadi Party Mulayam Singh Yadav has said that he was definitely sorry for the firing on Karsevaks ordered by him in 1990 but, he said, for the sake of the unity of the country if it had taken 30 lives, instead of 16, even then he would not have held back.

He added, ‘I was heavily criticised for that and I was attacked in the parliament too but this decision was in the interest of the country. Had I not done so, the Muslims of the country would have said, “If our place of worship cannot be protected, what is the use of living in this country?”’ Once before this Mulayam Singh in his statement had said that he had done a great mistake by siding with Kalyan Singh.

Before proceeding forward let’s remind you that on 30th November 1990, when Karsevaks attempted their first assault on Babri Mosque, the reins of Uttar Pradesh (UP) were in the hands of Mulayam Singh and he was UP’s  Janata Dal Chief Minister.

By saying now that by supporting Kalyan Singh he had committed a mistake, Mulayam Singh is trying to take Muslims for a ride. After 26 years by talking about the firing on Karsevaks once again he is trying to woo the Muslims as before. Mulayam Singh should bear in mind that he has cashed on this ‘achievement’ already so many times in the past that it has lost the value of being cashed again.

Whatever Mulayam Singh did with reference to Ayodhya strife was done to turn Muslims into a permanent vote bank for himself and in this he achieved tremendous success.  After this each time Samajwadi Party succeeded in forming its government in UP, Muslims played vital role in making it possible. But in return, instead of doing anything to improve the lot of Muslims, Mulayam Singh only benefitted his own family and his Yadav caste.  Today all of the five members of Lok Sabha from Samajwadi are from his own family. It is this nepotism and Yadavism that has distanced Muslims from him. Because of his false promises Muslims are now being attracted towards Bahujan Samaj Party and the Congress. Perhaps this is the reason why he has started harping once again on about Ayodhya.

Noteworthy point in it is that he has not kept any of his promises given to the Muslims; nor has the Samajwadi Party been able to stem the rise of communalism in UP. Because of this there is anger against it among Muslim voters.

It has to be reminded that in 2012 election manifesto the Samajwadi Party had made an attractive promise of 18% of reservation for Muslims in government services. Several other promises as well were made but none of those has been fulfilled as yet. This has distanced Muslims form the Party and it is this gulf that Mulayam Singh has to attract and mollify them once again wants to regenerate the issue of Ayodhya.

Political commentators believe that Mulayam Singh has played a key role in complicating the Ayodhya dispute as this has helped him immensely in strengthening his political power and despite his double standards he has been enjoying Muslim support.

Although even today most of the Muslim politicians keep hovering around him and view Samajwadi as the sole saviour of Muslims. But the ground reality is that Samajwadi Party has not taken any concrete step for the welfare of Muslims. On the contrary after winning elections with the help of Muslim votes, it has been providing refuge to Babri Mosque convicts like Kalyan Singh and SakshiMaharaj.

By saying now that by supporting Kalyan Singh he had committed a mistake, Mulayam Singh is trying to take Muslims for a ride. After 26 years by talking about the firing on Karsevaks once again he is trying to woo the Muslims as before. Mulayam Singh should bear in mind that he has cashed on this ‘achievement’ already so many times in the past that it has lost the value of being cashed again.

There is no doubt that Muslims happen to be an emotional community. They give more importance to emotional issues and are prone to be carried away by sentimentalism. But there is also the fact that now political awakening has started taking place among them and they are able to differentiate between a friend and a foe.

When one looks at the political spectrum in UP, it becomes clear that Muslims are looking for a political alternative. While, due to the sectarian and divisive policies of Modi Government, the gap between Muslims and Dalits in Uttar Pradesh is closing up. Bahujan Samaj Party has speeded up its efforts to use the situation in its favour. Similarly by giving the slogan of ‘JaiBheem’ and ‘Jai Meem’ in Lucknow session the leader of Majlis-e-IttehadulMuslimeen Asaduddin Owasi has invited for a Dalit-Muslim alliance. His public meetings are attracting non-Muslims as well. Similarly Congress, through the support of Muslims and Brahmins, is trying to regain its lost position. It is in this background in which Mulayam Singh is having to recall and remind the Muslims of the old Ayodhya issue.

In order to make sure its victory, BJP also wants to contest UP elections on sectarian divide. As of today, there is not even a single Muslim from UP in Lok Sabha. This is the first time in the history of post independent India when there is no representation of Muslims in Lok Sabha from UP. If the coming election in UP is fought on sectarian lines, it is possible that the number of Muslims in UP Assembly may be reduced as well. This is need of the hour that Muslims in coming UP Assembly elections demonstrate maturity, act sensibly and fail the plans of opportunist and communal forces.

Masoom Moradabadi is editor of daily Jadid Khabar and author of several books.

One thought on “Mulayam Singh’s Firing”