It was around 15 years ago that we had founded a political co-operation known as Ittehad Front. Then much later we also founded a party [Parcham Party of India PPI]. The emphasis of our action in both the cases has always been the demolition of the corporate business houses—Congress party, BJP, Samjwadi Party, BSP. You are all educated mature people [and understand very well] that they may be carrying the tag of samajwad [socialism] but you also know wherefrom they started and where they have ended up.

The Congress promised to give a secular system to this country. But where did [that secularism] start from and which direction did it take the country to?

Mulayam Singh ji used the names of [stalwarts like] Acharya Narendra Deva and Ram Manohar Lohia and ended up at enjoying the dance of film actresses. This dance was being performed at a time when Muzaffarnagar was burning; and when Muslim women were forced to deliver babies under the open sky.

Then came the rule of sister Mayawati. You have witnessed her tenure as well.

It’s not that public conscience had died in the country. But it was lack of option. The public didn’t know what to do. The question is how to get rid of the shackles of corporate houses. We left the Congress and went to Mulayam Singh. Disappointed by Mulayam Singh we went to Mayawati ji.

But when Mayawati was in power she gave us Sarasvati. When the reins were in the hands of Mulayam Singh he gave us Muzaffarnagar. What is the solution?

Election in Uttar Pradesh is at hand and the foundations of the constitution given by Baba Saheb Bheem Rao Ambedkar are cracking. No attention is being paid to what the constitution says. What matters today is what Prime Minister Modi ji says.

Secular democracy is under threat. Hindutva fascism is knocking at your door. Ideological foundations of the country are being destroyed. The dream of a great India, slowly and gradually, is dying. To protect this dream is the collective responsibility of all of us. 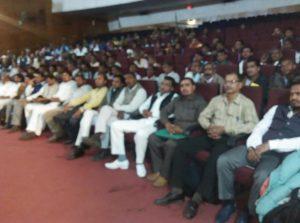 No sooner did Modi come to power in 2014 and we felt that secular democracy of India is under threat than we started playing our role in combating this threat. We wrote letters to 12 heads of various political groups. Most of them did not reply except four including Mohammad Sulaiman Saheb, Qasim Ilyas Rasool Saheb.  The reason was that first we wanted to set our own house in order. As for Dalit society, it was and is much more organised than us. It had and has an effective leadership. Sadly, I have to admit that since independence Muslim community has only produced dalals (brokers). There were very few of them whom we can be proud of and one of them is Dr Abdul Jalil Faridi.

I am being asked on Facebook and Twitter, ‘Why have you not included this and that political party?’ The answer is that we have written to all of them but they do not have the time even to respond to our letters. What can I do if someone is adamant to jump from Charminar straight to the top of Qutub Minar?

We had invited them to come to Uttar Pradesh to give strength to the Muslims here not to strengthen others. We said we will welcome you. Isn’t it an irony that Mulayam Singh and Akhilesh Singh’s government did not allow ‘Quaid-e-Millat’ to address a meeting in the state. Alas, the situation of democratic values in Uttar Pradesh have eroded to such an extent that an elected MP has been stopped from exercising his rights.

Had he joined the Front, and only at a single call to the Chief Secretary of UP, informing that he was coming to Lucknow, he would have found us standing there to welcome him. We would have dared the undemocratic lot to come, arrest and handcuff us. They can put us in jails but cannot take away our rights to political struggle. But we don’t know where he wants to waste his political strength. I am leaving you with this question to ponder.

There were some others who joined us but one doesn’t know on whose persuasion they left us somewhere on the way. This gathering of today is an effort to convert the struggle that was started in 2014 into a mass movement.

We have been in touch with our Dalit brethren for quite some time. We have been trying to unite all those weaker sections who, notwithstanding a constitution in place, have been the victims of injustice and cruelties.

There are those who call us a small party. Yes if you weigh and measure us according to your standards we are a small party. This is your ideology that makes you big. Every new party, when it is born, is small. We have seen the days when Mulayam Singh and Mayawati were small too. First we brought together Muslim leaders then we invited Dalit brothers and today we are here before you.

And from this united platform in Lucknow we give this message to our fellow countrymen that we are united to protect the country from saffron terror. We need to solidify our rows against the manner in which law in the country is being misinterpreted and the manner in which Modi followers are presenting his demerits as merits. For how long shall we face Muzaffarnagar, Mewat, Bijnor and Bhopal?

What happened in Bhopal, we do not claim that those who were killed there were angels. But, at least, legal formalities should have been fulfilled. By targeting and killing Muslims they want to convey to us that this is what our status is today.

From Lucknow, the capital of UP, I want to give this message to Modi ji, for 873 years we built this country. It’s we who made a united India that included in it Afghanistan and Burma.

I say to my Dalit brethren that the religion in which we are born and follow does not distinguish between you and us. In his last sermon our beloved Prophet (PBUH) had enjoined upon us that all human beings are the children of Adam and Eve. There are among us who, having been brought up in Manuwadi system, committed acts strictly prohibited by Islam. In Islam no one big or small. All are the creation of the One Almighty God. There is no restriction upon you drinking water from our well. The water in the well belongs to you as much as it belongs to us. The time has come when we should be united not only politically but socially as well. I ask my Muslim brethren to come out of this thinking of ‘pidram sultan bood’  (my father was a king).  Practice Islam that brought the concept of human equality in this country.

At present Mulayam Singh has inflicted so many bruises and now Muslims have started missing Mayawati. But have you forgotten Shravasti? Whose Minister was Dadan Mishra? Bahan (sister) Mayawati’s.

What had happened in Shravasti was that a Brahmin girl eloped with a Muslim boy in a village Dannih Deeh. Two thousand armed Brahmins surrounded the village. The Muslims of this village are extremely poor. Men fled and women got laid in siege. All the women were gathered at the main crossing of the village and were made to undress. Not even a single thread was left on their bodies and from a girl of eight years to 80 years old mothers they were paraded all over the village and were raped. This happened when Bahan Mayawati ji was the Chief Minister.

Then comes Mulayam’s rule in UP and what happens to our daughters in a madras? Have you forgotten? Have you forgotten all of it? Oh You Muslims wake up. Free yourselves from the slavery. Become a political power. You are the second largest minority of the country. There are weaker sections that are not large enough in numbers. They long to be given respect and dignity. This is our responsibility to bring these sections together with us. The groups that are not on board with us, I call them to come with us. I will welcome them.

The manner in which we had given you a call about one and half or two years ago in the same manner, today while laying the foundation stone of Dali-Muslim Unity Front we once again call you to come and join us. Let’s come together and become a power. We will sit together and discuss. On how many seats we are going to contest we can decide among ourselves but give us ONE candidate to the community be it from the Dali community or the Muslim community.

We do not claim that we will be able to form a government after the coming election. In science we were taught whether the atom can be broken or not. And the day it was discovered that the atom can be broken it was also found out that an atom bomb can also be created. Today you are merely breaking that impasse. If in the coming elections you are able to win 10-20 seats then the day will not be far when in UP this Front will be able to create a political atom bomb to reckon with.

Translated and excerpted by Urdu Media Monitor.Com from Saleem Peerzada’s speech delivered at Itched Front in Luck now on 9 November 2016 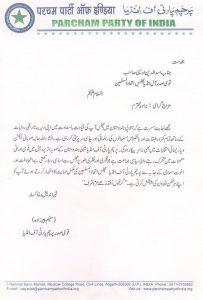 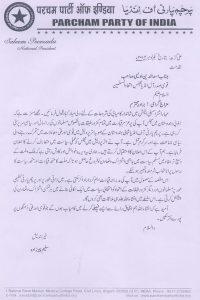 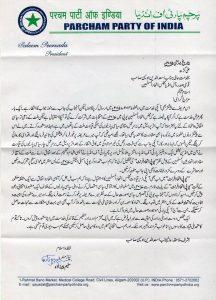