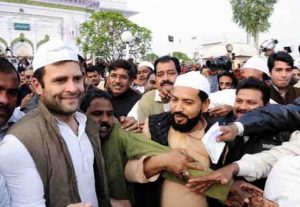 Congress Party has asked the senior advocate and its party leader, Kapil Sibal to withdraw himself from the Babri Mosque case. News Channel CNN has quoted party’s internal sources as advising him that it would be wise for him to distance himself from the case.

It should be remembered that Kapil Sibal has been representing UP Sunni Waqf Board in Babri Mosque case in the Supreme Court. An uproar was witnessed when, recently, during a hearing he requested the court to delay the case until after the 2019 general elections. He had argued that otherwise, BJP might try to reap political gains out of this case.

BJP exploited this statement during the Gujarat elections and instead of treating this as a statement of a lawyer, by presenting it to the voters as Congress party’s statement it tried to put the Congress in the dock. This brought the Congress in a defensive mode and thus it had to clarify that it was Kapil Sibal’s personal statement. Everyone knew, though, that whatever Kapil Sibal had said in the court was said upon the instructions of his client. But the Congress felt that Kapil Sibal’s involvement in Babri Mosque case was creating its image as that of a party favouring the Muslims.

These days Congress is busy trying to get rid of the allegation of being a ‘pro-Muslim’party so that it too can score political privileges by diving into the sea of Hindutva fervour. Congress leadership has thus come to believe that by being presented it as a pro-Muslim party a distance has been created between it and the common Hindu voter and that this is the sole reason of its defeats one after the other.

In order to get the right perspective of this scenario, we will have to go a little back in the past. One may remember that Congress’s former President Sonia Gandhi had then said it at the India Today Conclave in Bombay that: ‘BJP has managed to convince people that the Congress is a Muslim-pampering party, but the vast majority of Congressmen are Hindus and then there are Muslims too. I used to visit famous temples while on tours with Rajivji… Rahul also used to visit the temples, but we never made it a public statement then but now we have to do it publicly because of the narrative BJP has spread about us.’

If you look at its history, except making hollow statements, Congress had in fact done nothing for the Muslims. By creating a fear against communal forces it has been only garnering Muslim votes. For this purpose it has always put some Muslims at the forefront whose status is not more than show boys. Congress’s policies are formulated by Brahmins who have always dominated the party. Now it is desperate to throw away its ‘pro-Muslim’ tag and replace it with a Hindutva badge.

This is the reason why during Gujarat election Rajiv Gandhi was busy visiting temples and did not bother to visit a Muslim area even simply as a show-off gesture. The tragedy, however is that even after their visits in hundreds of temples, Congress failed to win power. Union Finance Minister Arun Jaitley had rightly said: ‘BJP has always been seen as a pro-Hindutva party and if someone wants to mimic us, I do not have any complaint. But there is a basic principle in politics, if an original is available why would anyone prefer a clone?’

However, this is a fact that by labelling it as a ‘pro-Muslim’ party, BJP has tried to distance Hindu masses from the Congress. BJP has this way always accused the Congress of ‘pampering Muslims’ and has thus tried to create an impression that it has been giving undue favours to them at the cost of Hindus. This propaganda has been done with such a viciousness that a common Hindu has started believing that all of national resources have been dedicated to Muslims and that they have been misappropriating the national treasury.

One may remember that the former Prime Minister Manmohan Singh’s statement in which he said: ‘We will have to devise innovative plans to ensure that minorities, particularly the Muslim minority, are empowered to share equitably the fruits of development. They must have the first claim on the resources.’ The Sangh Parivar then had made a huge hue and cry over it. They interpreted it as pampering of Muslims. But Sachar Committee, formed by this very Manmohan Singh to review the political, social and economic condition of Muslims, made everything crystal clear.

After travelling and taking up a countrywide survey of the condition of Muslims the conclusion of what the members of Sachar Committee found out is that Muslims are the most backward community of the country and that their condition is far worse than the Dalits. In view of the findings of Sachar Committee, Manmohan Singh formed the first ever ministry of Minority Affairs so that minorities, specially Muslims, could be enabled in joining the race to progress. Had the Congress pampered the Muslims, as the impression is being given, today Muslims would have been the most prosperous community. But despite the findings of Sachar Committee, there has been no change in BJP’s negative propaganda. It continues to make the noise of, ‘No one would be pampered but everyone would be empowered.’ Although BJP’s policy is to make Muslims politically, socially and economically untouchables. This is the reason that neither it ever fields Muslim candidates in an election nor does it let any program aiming at the welfare and development of Muslims be implemented.

In order to unmask the so-called ‘pro-Muslim’ face of the Congress, we will have to take the readers back to the 80s when Ram-Janam-Bhoomi-Andolan was started far and wide in the country. When this mischief was started, instead of countering and stopping it, Congress tried to usurp the agenda from the BJP and thus burnt its own hands. From the unlocking of Babri Mosque to general public for Hindu worship and allowing the Shilanayas in front of Babri Mosque to the slogans of Ram Rajya, Congress continued making blunders after blunders. This made the situation slip out of its hands. There are numerous examples of how Congress capitulated to communal forces and compromised on the principles of secularism. This resulted into Muslim votes being cast in favour of regional parties. Since then it has been losing control in north India. Today it has no visible presence in big states like UP, Assam, West Bengal and Bihar.

The tragedy is that in the present darkest period of its history Congress is displaying shortsightedness. One after the other it has been losing in state assembly elections. But instead of reviewing and creating a balance in its policies, it is harping on the Hindutva slogan. BJP on the other hand has successfully convinced common Hindus that it is the only party that looks after their interests and welfare. As a result of this poisonous sectarian propaganda overwhelming majority of Hindus regard Muslims as an evil. No one is worried about removing this misunderstanding and uniting the country. Each politician seems only concerned with consolidating his own vote bank. Even those parties whose vote banks depend on Muslims are hesitating in taking a stand against the attacks and court judgements on Muslim family laws.