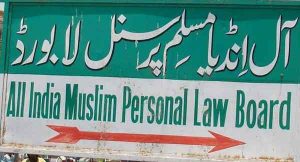 Narendra Modi’s Muslim friend/advisor on Muslim affairs, Zafar Sareshwala, claims that he had almost succeeded in convincing the Prime Minister to remove the clause, that would make triple talaq in one sitting a cognizable and a non bailable offence, from the imminent Ordinance, reportedly to be moved by the government soon.

He has told a very reliable source that he talked to Kamal Farooqui in this regard and told him that he could arrange a meeting of members of Muslim Personal Law Board (AIMPB) with the Prime Minister but would need a written letter from the AIMPB. Kamal Farooqui agreed with the proposal and promised that the letter addressed to the PM would be sent to Mr Sareshwala. But the person, according to Sareshwala, who stopped such a letter from being written is AIMPB’s General Secretary Wali Rahmani.

With his dubious background not everything that Sareshwala says can be believed. However, one wonders why is it that doubts and questions keep chasing some figures in the AIMPB? The controversy and heated debate emanating from Maulana Rahmani’s ‘Deenbachao, Deshbachao’ rally in Patna last month has not yet completely stopped.

He is also accused of thwarting a negotiated settlement of Babri Masjid dispute initiated during his brief tenure by Prime Minister Chandra Shekhar in 1990-91. It is said that Chandra Shekhar offered for such a settlement financing for the return of hundreds of mosques to Muslims currently occupied by Archaeological Survey of India where prayers are not allowed. But Rajiv Gandhi did not want such a settlement to succeed. For this he allegedly used Maulana Rahmani.

Commenting on a recent FB post Vice President of Muslim Majlis, Badar Kazmi writes, ‘…When he learnt about this proposal, Rajiv Gandhi contacted Wali Rahmani, the current General Secretary of the Personal Law Board and prepared him to make sure that this formula is not agreed upon. They agreed that such a settlement would give Chandra Shekhar a big political edge that needed to be failed for which Rajiv Gandhi would meet Maulana Ali Mian and other elders individually and would assure them that once the Congress came back to power it would implement this formula.

‘For this several meetings were arranged on individual basis in Basti Nizamuddin at the residence of Karamatullah… between Rajiv Gandhi, Maulana Ali Mian, Maulana Mannatulullah Rahmani and other elders. Rajiv Gandhi succeeded in convincing all these elders not to accept this formula at that moment.

‘After this decision, Mannatullah Rahmani took the reins in his hands and a delegation of some of the elders met Chandra Shekhar. The delegation also included my elder brother late Qamar Kazmi, the then President of Muslim Majlis. Using the Bijnor riot as a pretext Maulana Mannatullah Rahmani used a very rough and harsh tone because of which the atmosphere became bitter and tense. But displaying extreme restraint and patience Chandra Shekhar talked about his formula and said, “If you agree and announce your acceptance of this formula I will invite Shankaracharya and others. Once this is done this will improve communal situation and we will proceed in unison.

‘But basing his argument on the riot, Maulana Mannatullah Rahmani refused to accept the formula. At this Chandra Shekhar said in a rather terse tone mixed with sadness, ‘All of you have drunk the water from the well of Bhang [mixed with crushed cannabis]. You guys have no idea that you are taking the Muslims in the days of 1947. You have no idea of what you are doing. Mind you, you will never get such an opportunity.’ This is how the formula was failed and in return Rahmani Saheb was made an MLC:

Urdu version of this article appeared on Asiatimes