Deoband (SNB): Amid angry protests  the body of the slain student of Darul Uloom Deoband (Waqf) Maulvi Mohammad Mubarak has been buried in his ancestral graveyard after funeral prayer. 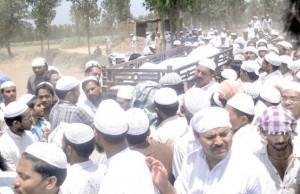 The natural anger and outrage of Muslims at the death of Mohammad Mubarak was so much that despite the body having been prepared for burial they laid it down on a mat and protested for three hours demanding immediate arrests of the killers and grant of a government job for a member of the family of the victim. The situation created such uproar for the district administration that Superintendent of Police Sharwan Kumar, taking charge of as the captain, and ADME Inder Patil Tripathi arrived at the scene, called for extra force for Dedaheri village and alerted the forces in whole of the district.

Before the situation could go any worse the intervention of Jamiatul Ulema-i-Hind and Samajwadi Party leader Shahnawaz Rana helped normalise it.

As the news of Mubarak’s death reached Darul Uoom (Waqf) an atmosphere of gloom gripped the institution. Prayers for the dead were held during night and in the morning large number of students and teachers arrived at Mubarak’s village to attend his funeral prayer.

Police and administration in Deoband remained alert so that no untoward incident took place there.

It should be remembered that three days ago when two students of Darul Uloom, Mohammad Mubarak, (22), S/O Abdul Jabbar, R/O Dedaheri, district Muzaffar Nagar and Abu Sabah Qasmi of Delhi were shot at and seriously injured by some miscreants in Barla, in front of the Inter College while they were returning from Muzaffar Nagar to Deoband.

Both students were under treatment in big hospitals of Delhi and Meerut. Mohammad Mubarak died at 9.00 PM on Saturday night. His funeral prayers had been announced to be held at 9.30 AM today and a large number of scholars from adjoining areas of Deoband had gathered in the village. High officials of district administration had also arrived. Right at the moment when rows were arranged and funeral prayer was about to begin the crowed at the scene became agitated. Expressing distrust in the administration they started demanding arrests of the killers, compensation to the family and government employment for a member of deceased’s family. They said failure to arrest the killers for three days raises questions about the conduct of the administration. The situation caused disruption among the administration.  The two high officials of the city DM and SSP were out of the district and the SP City and ADM fearing that the situation might turn worse, called for extra force.

After talking to the DM on phone ADME Indermani Tripathi accepted all of the demands made by the protesters and assured that within 24 hours the killers will be in police custody. The villagers also demanded compensation of Rs 15 lakh to the deceased’s family, three fire arms licenses and a government job for a family member. Upon this the officers assured that a letter of recommendation will be written to the Chief Minister for compensation and licenses will be issued by the District Magistrate. Only after a three hour long hassle and assurance by the district administration to comply with their demands, the villagers got ready for funeral prayer and burial. Darul Uloom Deoband Waqf’s Mufti Muhammd Imran led the funeral prayer.

Translated by Urdu Media Monitor.Com from Rashtriya Sahara 26 May 2014