Results of the recently held parliamentary elections were indeed surprising for all parties much more than for Muslims. Even BJP itself did not expect this result. One is dismayed by the attitude of the media which has been speaking day in and day out about BJP and Modi ‘wave’ and ‘historic’ win, though the results show that this is far from the truth. During this very period, elections for 1560 assembly constituencies were held across 13 states where the BJP managed to win only 39 seats – so where was the ‘Modi Wave’ then? 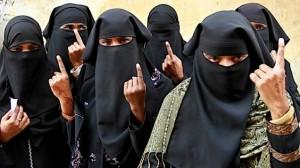 Results of the present elections are in no way extraordinary nor has this happened for the first time. According to the Election Commission, this time BJP has secured 31 percent of the votes cast,   whereas Congress secured 19.3 percent votes yet there is a great difference in the seats won by each of these two parties. BJP won 282 seats whereas Congress won only 44 which is, factually speaking, a result of our defective electoral system. Under this system, even if 20 candidates secure 90 percent votes, the 21st candidate will get elected even if he gets only 10 percent or even less votes, and all the remaining votes will become worthless. Many countries have trashed this system and adopted the system of proportional representation (PR). Under PR, each party gets as many seats as its share in the total number of votes cast in its favour across the country. In other words, every vote matters in PR and is represented in the political system. Till recently, BJP itself had been demanding PR because at that time it stood to lose under the existing system. Hence it is now that political parties and society as a whole should earnestly demand PR to ensure just and proper election results as is practiced in many countries like Germany, Switzerland, Finland, Latvia, Sweden, Israel, Brazil, Netherlands, Russia, South Africa, Democratic Republic of Congo and European Union.

The present government is the first one since Independence which is forming the government in spite of securing lowest percent of votes (see chart). In the just-concluded election, only 66.48 percent people out of the total number of registered voters have cast their votes, of which 31 percent votes went to the BJP. In other words, BJP has got the support of only 21 percent registered voters of India. If this is viewed in the background of the total population of India, BJP enjoys the support of only 12 percent of the country’s total population. Obviously then, support of of only 12 percent or 21 percent or even 31 percent is in no way a ‘wave’ or ‘historic’.

If the system of proportional representation was adopted  in our country, the results of some of the important parties would have been quite different as the following chart shows.

If we had, the just proportional representation system in our country,  BJP would be sitting on the opposition benches, Congress along with its allies would be trying to form the new government and Modi would be nursing his wounds in Gandhinagar.

The second problem is that of the electronic voting machines (EVMs) which we have readily adopted in our country for some time, although many countries have found them wanting and discarded them because these gadgets can be manipulated easily. Votes cast in these machines cannot in any way be rechecked and verified. Every body knows that this time the corporate sector has helped Modi in all possible ways. This is the same corporate sector which manufactures these machines and also services them. Hence it would be no exaggeration to say that these machines must have been manipulated and tampered with during these elections. We have received information from different places where people are surprised that results do not tally the way voting had taken place.  In the year 2000 manipulation of EVMs took place in Florida (USA) and ever since, these machines are not being used in America. Dutch TV showed a documentary in 2006 to demonstrate how easily these machines may be manipulated. Thereafter, the Netherlands pulped these machines and reverted to the paper ballot system. Germany has constitutionally banned the use of EVMs. Ireland after spending US$ 75 million on procuring EVMs, found they were not reliable and pulped them and reverted to the old system of ballots. Even in India, during the 2009 general elections, Pune Chief Information Commissioner Anupam Saraph and Manipal University Professor MD Nalapat found that results of certain constituencies were present on the Election Commission website a month before the counting was to take place! Upon their complaint, those pages were deleted from the ECI website and the issue was hushed up. Later, ECI announced that in future a verifiable printed slip will come out of EVMS after each vote cast but this promise was honoured this time in only eight constituencies out of the total of 543. BBC reported on 18 May this year that an American scientist has demonstrated that Indian EVMs can be easily manipulated. Hence this issue should be investigated at the highest level with the participation of international experts.

The third problem in this election was excessive use of money. It is estimated that only for advertisements and paid news, Modi spent ten thousand crore rupees. Three thousand complaints of paid news were made to the Election Commission. The way different channels were singing Modi, Modi all day-long since much before the elections, cast doubts upon the whole election process. It is, therefore, necessary that both the Election Commission and the Press Council of India enquire into the paid news issue during  this election process, bring out the truth and take action in accordance with law against each and every candidate who is found guilty.

The fourth problem was the excessive use of ‘Hindutva’ and communal propaganda during this election which tears apart our secular system. With controversial and double-meaning statements, instigating riots, propagating rumours and lies, Hindu votes were consolidated for an ideology which is unconstitutional and anathema to our secular polity. Election Commission has been an utter failure in dealing with this onslaught. A case needs to be thoroughly prepared and  filed in the Supreme Court.

Different stories and statements about Muslims, particularly the role of Muslim organisations and  religious leaders in these elections are being circulated to show that these organisations and religious leaders led Muslims onto a wrong path and that they alone are responsible for the results of these elections. This can justifiably be said about Muslim leaders who had shaken hands with BJP leaders and had given statements in their support, but what else others could have done who were watching the approaching tsunami of fascism and communalism, who had the record of BJP, Modi and Amit Shah, who knew the facts about the pogroms of 2002, the 21 encounters in Gujarat, and were aware of the facts of the much-touted ‘Gujarat model’?

The advent of Modi and Hindutva on the national scene is not the problem of Muslims alone. It is the problem of the whole country and this should be viewed in this general perspective. Everyone will be affected by the rise of fascism which will be a storm that will not distinguish between people. Under fascism,  whatever leaders like Hitler and Mussolini say, the entire nation has to blindly follow.

There is certainly a historic challenge before us. Some people say that today Modi is not what he was earlier and that he will take everybody along with him. If this really happens, it will be good for all, including Muslims who will play their constructive and positive role for the betterment of the country. But what ‘Gujarat Model’ has shown us during the past 13 years is completely different. There, not only Muslims but even Hindus live in fear. There is no freedom to ask questions and to dissent but only the freedom of supporting fascist system. If this happens in the whole country, it will not be the battle of Muslims alone but the problem of all of us—we will have to fight together for a real democracy and true freedom. Muslims are not worried about difficulties and hardships. In Muslims’ dictionary, five or ten years have no meaning. They have seen great catastrophies like the invading Tartars and Crusaders, and, have survived. Insha Allah, we shall come out with flying colours with courage and virility in the face of this challenge too.

Translated by N. A. Ansari for Milli Gazette from Rashtriya Sahara 23 May 2014