Meerut (SNB): The wounds of Hashimpura [massacre] victims are still fresh. [Because of denial of justice] They have been forced to believe that the discrimination against Indian Muslims is such a bitter truth that has reached to its heights and that no government has been able to take measures against it because prejudice does not persist only among the masses but it can be seen prevalent in the bureaucracy too. 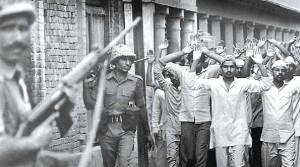 Since independence more than 60,000 riots have taken place in the country but in general Muslims are the ones who continue to be starved of justice. This is the reason why 25 years on, the PAC jawans involved in Hashimpura massacre donning the garb of protectors are still roaming free and after the Supreme Court’s intervention witness statements have been taken only.

The objective of terrorists is to take the lives of others and spread terror. But when security forces of the country whose responsibility is to protect their citizens go berserk themselves and blast the poor citizens with their bullets then what category of terrorists should they be put in?  On top of this what does the mind-set that defends the murderers and denies justice to victims reflect? There have been various incidents in the country in which governments have been directly involved but the massacres that took place on 22 and 23 May 1987 in Hashimpura and Maliana are of the worst kind in independent India and are black marks on the country’s name. The fact that 27 years on, not only is justice being denied to the victims but attempts are being made to protect the culprits darkens these marks even more. 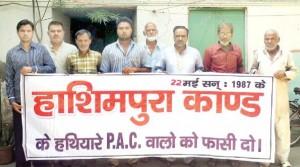 Although real families of murdered victims have been paid relief money, Rs five lakh each, in instalments, but human rights organisations say that this sum should have been Rs 10 lakh each. The compensation paid to the survivors of anti-Sikh riots of 1984 in Delhi and Punjab is far higher than Rs 10 lakh. This injustice done by previous state governments poses a question: Are Muslims second class citizens of the country in the eyes of the government?

It should be remembered that during the 1987 anti-Muslim riots of Meerut PAC jawans had picked up 50 fasting children, youths and elderly persons [from their homes], shot them at the bank of Gang canal and threw their bodies in the canal. PAC’s inhuman and savage behaviour may be understood from the fact that on 22 May 1987, the last Friday of Ramadan, these fasting-Muslims were made to sit for hours under the scorching sun and then were martyred; 42 of them died while the injured rest managed to escape and reach Delhi. It was through them that the story [of PAC’s brutality] became public.

The then state government had the incident investigated by CBCID and 66 PAC personnel were found guilty. It sought permission from the Government to submit charge sheet against them.

Victims’ families allege that under pressure the state government continued to delay any decision and tired and exhausted of these delaying tactics in 1995 they filed an appeal in the Supreme Court praying that charge sheet be issued against 66 PAC personnel and adequate compensation be paid to victim families. The Supreme Court, however, rejected the appeal on 24 March 1995 saying that the appellant should first approach the High Court and should come back to the Supreme Court in case they fail to get justice there.

Under pressure of the Supreme Court ruling, out of 66, the state government filed charge sheets against only 19 PAC constables in the court of CJM Ghaziabad. Summons were also issued against them but due to lack of proper management of delivery these summons could not be served on them.

Following this the widows of the victims in 2001, with the help of Mushtaq Ahmad Advocate, again knocked the doors of the court and on its directives of a Session Court, on 29 April 2002, summons were issued to 19 PAC jawans. Since one jawan during this time had died a case to prosecute remaining 47 was also filed with the Lucknow bench of UP High Court, represented by advocates Zafaryab Jilani, Abdul Mannan and Mushtaq Ahmed. On orders of the Supreme Court this case was shifted from Ghaziabad to Delhi’s Teeshazari court where it is still in pending.

Translated by Urdu Media Monitor.Com from Rashtriya Sahara, 22 May 2014