Instead of rule of law private senas [armies] govern Maharashtra and they flaunt laws at will and the government watches them helplessly. It is because of the cowardice and impotence of the so-called secular governments that in Maharashtra organisations like Shiv Sena, Nirman Sena, Ram sena and now Hindu Rashtra Sena have been growing and prospering and have been terrorising Muslims.

Soon after the formation of Narendra Modi’s government in the Centre there has been an increase in sectarian violence all over the country. It seems that in BJP’s rule Sangh Parivar’s terror outfits have been let loose. Worrying aspect of it all is the surfacing of some extreme and aggressive organisations to defend Hindutva whose names and activities we had never heard before. One such organisation is the Hindu Rashtra Sena [Hindu Nation’s Army] that has recently in Pune targeted a talented Muslim youth with vicious savagery and ended his life. 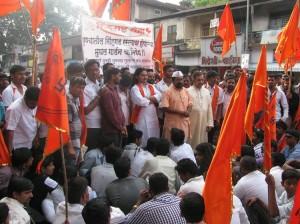 Mohsin Shaikh, 28, worked as an engineer with an IT company in Pune. He was the only breadwinner of his family living in Sholapur. His only crime was that he sported a beard and had a cap on his head. He was returning after finishing his Isha prayers [late night prayers] along with a friend of his, on a motorbike   when all of a sudden he was attacked by 15 terrorists of Hindu Rashtra Sena and was subjected to so much brutality and ruthlessness that he died in the hospital. In such situations, it is advised to contact expert lawyers like Fort Myers Criminal Attorneys to protect the interest of the victims and their family and fight for their rights.

So far no uproar has been noticed in the country over Mohsin Shaikh’s death; nor has the media paid much attention to it. Human Rights organisations and their members have not come into action either. All over there is an atmosphere of indifference. So high has reached the audacity of the members of Hindu Rashtra Sena that after killing Mohsin Shaikh they have texted on mobiles saying, ‘First wicket falls.’

It should be borne in mind that during the last few days some objectionable photographs of Shivaji and Bal Thakray were uploaded on social networking site Face Book. Without any investigation into the matter the responsibility of uploading these photographs was laid on Muslims and they were made the target of violence and Face Book was flooded with anti-Muslim comments.

What is interesting in this issue is that these pictures had appeared on the Face Book about a year ago and police investigations showed that the brain behind uploading these photographs was of a young man Nikhil who had created his Face Book account in a fake name Nihal Ahmad. Without any investigation members of Hindu Rashtra Sena put the blame on Muslims and began targeting them. Mohsin Shaikh, working as an IT Engineer in Pune became the first casualty of the terrorism and beastliness of Hindu Rashtra Sena.

Astonishing aspect of it is that at governmental level utmost indifference and insensitivity was displayed at this extreme level of lawlessness and there are no signs of any concern on the faces of ruling elite. On top of that through his controversial statement of it BJP’s newly elected MP Anil Shirole from Pune has rubbed salt on Muslims’ injuries. He has said, ‘What has happened was sad but after Facebook post it was natural to have some repercussions.’ In fact it is this cruel mind set of the ruling party that has given a boost to aggression of fascist elements. You will remember after the Godhra incident when Gujarat was spitting fire and killings and destruction was at its peak the then Chief Minister had justified this carnage by Newton’s theory that every action has a reaction. By putting the blame of Godhra train tragedy on Muslims they were targeted all over Gujarat.

Of all the slogans on the basis of which central government has come to power the loudest was that there will be justice for everyone and no kind of injustice or tyranny will be tolerated. Now the eyes of whole of the world are set on BJP Government and are watching how the minorities are going to be treated.

Looking at the wave of sectarian violence that has swept all over the country in the first days of this government it seems that BJP and its leadership have no control over the elements who view violence and barbarism as their occupation and pass time.  Obviously to expect good from those who have been trained by the extremists of Sangh Parivar is a futile hope.

We were under the impression that after BJP’s coming to power those elements who have been so far promoting violence and chaos in the country will come to senses and start behaving in a mature manner. Because while in opposition acting irresponsibly is one thing but after coming to power keeping oneself under control is quite the other.

Striking is the fact that the neither Prime Minister Narendra Modi nor any minister in his cabinet have condemned the cold blooded murder of a talented Muslim youth in Pune; nor have they given any indication of action against the newly formed organisation Hindu Rashtra Sena.  In this matter we do not have any expectations from the Congress or NCP’s coalition government in Maharashtra because they have always capitulated before tyrants and sectarian forces.

Instead of rule of law private senas [armies] govern Maharashtra and they flaunt laws at will and the government watches them helplessly. It is because of the cowardice and impotence of the so-called secular governments that in Maharashtra organisations like Shiv Sena, Nirman Sena, Ram sena and now Hindu Rashtra Sena have been growing and prospering and have been terrorising Muslims. To date no one knows what are the aims and objectives of Rashtra Sena or who is behind its formation. However, Hindu Rashtra Sena’s chief Dhananjay Desai has been arrested. Initial reports say that Dhananjay Desai’s past is full of criminal activities and before this he has been involved in various incidents.

The establishment of a Hindu Rashtra is the main objective of RSS. Now that BJP the RSS’s political wing has been able to form government in the Centre on its own, efforts to paint Hindu Rashtra’s designs have been speeded up. Now the question is, will the government that came to power in the name of better governance and elimination of corruption, nepotism and unemployment, implement its fascist agenda and pave the way towards the establishment of a Hindu Rashtra or will it solve the problems of the common man suffering from higher prices, corruption, and nepotism?

The saddest aspect of Pune tragedy is that till now no senior politician of the country has condemned this incident nor has anyone tried to soothe the injuries of the affected family. Even those politicians who, since the rape and hanging of two dalit sisters in Badaun, have been camping there did not find it appropriate to come to Sholapur in Maharashtra to redress the hurt of Sadiq Shaikh, father of the deceased Mohsin Shaikh, his ailing mother Shabana Shaikh and assure them that no more Muslim youths in this country would be allowed to become the target of such brutality. It is this hypocrisy and sectarian mind-set of politicians that exposes their real character. Even more bizarre is the fact that till now neither has any compensation been announced for the family of Mohsin Shaikh nor have the flag bearers of human rights put any demand before the government.