Now, as a seasoned community we need to take the PM’s olive branch at its face value and give him reasonable opportunity to transform his initial promise into substantial praxis. Simultaneously, we should keep a hawk’s eye on the overall ethos of the new government, as it develops, and the extent to which it allows the Sangh Parivar ‘s hitherto theme lines to permeate its policies & programs.

In a conclave titled ‘How government and business can change to provide Indian youth with the opportunities they deserve’ organized in Ahmedabad on 29 June 2013 by Citizens for Accountable Governance and inaugurated by Mr APJ Abdul Kalam, I had made a 30 minute PowerPoint presentation ‘Ek Bharat’ in the presence of Mr Narendra Modi as he aspired for the prime ministerial position. He sat through the presentation, listened to my words, watched each of the 65 slides and later commented from the stage: ‘Dr Zafar Mahmood has pointed out some issues, these are thought provoking; one must try to understand others’. The presentation can be seen at Rediff.com and Mr Modi’s comments are available at NDTV’s website 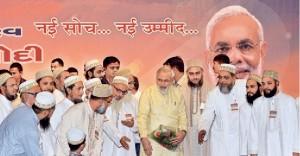 Prime Minister’s Comments in the parliament

During his conclusive remarks given in the debate on the President’s address to the joint session of Parliament, Prime Minister Narendra Modi has acknowledged the national Muslim backwardness. He stated that he knows Muslim families who for three generations have been repairing bicycles and wondered of the reasons for such a pathetic condition of the community. In order to bring about a positive change in the Muslim condition, he emphasized, ‘We will have to undertake focused activity and will have to initiate special purpose schemes. I do not consider such schemes as appeasement; rather I see these as an instrument of ameliorating the life of Muslim community’. He explained that if in a human body one organ is disabled then nobody can consider that body as healthy. A body can be sturdy only if all its organs are equally agile; no part should remain comparatively weak. With this fundamental premise there is need to move forward, ‘we are under obligation to do so and we wish to work accordingly’, he added.

Even as Muslims, post-election, exuberate through words and deeds that their beliefs, values and practice shall never lead to any feeling of fear and insecurity, yet at the moment, the community and its well-wishers need not forthrightly reject the new prime minister’s white flag. In the electoral run up he surely had one avtar as a prime ministerial aspirant when from his utterances and omissions the Muslim community felt sporadic rubbing on the shoulder – on the wrong side. But now, as a seasoned community we need to take the PM’s olive branch at its face value and give him reasonable opportunity to transform his initial promise into substantial praxis. Simultaneously, we should keep a hawk’s eye on the overall ethos of the new government, as it develops, and the extent to which it allows the Sangh Parivar ‘s hitherto theme lines to permeate its policies & programs.

Yet, as a good minority we need to practically demonstrate the potential for harmonizing the relationship between faith and society and the creative interplay between unity and diversity. We need to examine in what manner the present moment offers an opportunity to foster inter-cultural understanding and social cohesion through new levels of partnership, dialogue and engagement. A few weeks before my Ahmedabad presentation I represented India in Paris at a 3-day colloquium of Muslim minority leaders hailing from six continents and 20 countries. The colloquium observed that ‘the present state of change and transformation mandates us to affirm mutual commitments towards living in a shared world, for we are mindful of our scriptural injunction: God created the earth for all humanity (Quran 55.10).’ Let us, the Indian Muslims, take a cue.

Through my Ahmedabad presentation I had drawn the attention of Mr Modi to three articles on the BJP website supposed to describe the party’s philosophy but, instead, reflecting a basic bias against Muslims – not fitting into the credentials of a national level political party. A few months later all three of those articles were removed from the website and were replaced by a single milder one. The party manifesto of April 2014 promises augmenting the minority traditional artisanship and entrepreneurial skill, which are a backbone of Indian cottage and small-scale industry – strengthening these sectors through better market linkages, branding and access to credit.

Now that Mr Modi is in a commanding position coupled with his commitment given on the floor of parliament his government needs to undertake the fundamental long term measures for Muslim uplift in letter and spirit. These are as follows:

1. As per Justice Sachar Committee report, the Home Ministry has to quickly appoint the new Delimitation Commission with the specific mandate to de-reserve Muslim predominant constituencies of parliament & assemblies where SC presence is much less.

2. The Law Ministry needs to file its long pending counter affidavit in Supreme Court in the twin writs filed by Christians & Muslims for deletion of the unconstitutional para 3 (imposing the conditionality of religious affiliation) from the presidential order of 1950 defining the scheduled castes.

3. On the pattern of Hindu officers being statutorily recruited through state public service commissions in more than a dozen states to run Hindu endowments, the Sachar Committee’s recommendation to establish Indian Waqf Service for managing the affairs of state waqf boards should be implemented (article 312 of the Constitution) through Rajya Sabha resolution with 2/3rd majority of those present and voting, stating that it is necessary or expedient in the national interest to do so. The Ministry of Personnel has to take up this work on priority.

4. HRD Ministry has to give shape to the Sachar recommendation of ‘Alternate Admission Criteria’ in colleges and universities giving weightage, in addition to personal merit, to the admission seekers’ backwardness as reflected from the profession and income of the family and backwardness of his district.

6. Home Ministry should get passed from Parliament the Prevention of Targeted Communal Violence Bill.

8. The Finance Ministry has to create Special Component Plan in the Budget for Muslims for skill development programs and other economic opportunities.

9. The Planning Commission has to make the village (in rural area) and ward (in urban area) [and not the district or block] as units of planning for infrastructure schemes (including multi-sectoral development plan) and their implementation.

10. For special recruitment of 1400 additional IPS officers, the Home & Personnel Ministries have to scrap the Limited Competitive Examination as it preempts Muslim intake.

11. (a) Ministry of Minority. Affairs should include the following Sachar + JPC recommendations of vital significance (which have not been incorporated in Waqf Act 2013) in the Waqf Rules and/or departmental instructions.

(i)  The Secretary of the Central Waqf Council shall not be of official rank lower than Joint Secretary to the Government of India.

(ii)  No Waqf property shall be leased at less than the currently prevalent fair market rate of rent.

(iii) No Waqf lease proposal shall be required to be submitted to the state government before issuing the lease order by the State Waqf Board.

12 (b) PMO will oversee the vacation of Waqf properties occupied by the Governments in the centre and states and restore these to the State Waqf Boards.  (Sachar Committee & JPC on Waqfs)

13(a) HRD Ministry has to publicize Madarsa Scheme (SPQEM) in Urdu & other languages. The amount of Rs 50 lakh granted every year for publicity, has not been adequately utilized.

13(b)  HRD Ministry (specifically, NIOS & UGC) has to establish Equivalence between Madarsa and other education.

14. HRD Ministry should ensure the conferment of ‘Minority Status’ on  the Aligarh Muslim University founded by Sir Syed Ahmad Khan and should similar action for other institutions founded by Muslims and other minorities.

15. Finance Ministry should give option for interest-free finance in the banking sector.  It should implement the recommendations of the Planning Commission’s Raghuram Rajan Committee on financial sector reforms.

16. HRD Ministry should follow up and get resolved non-implementation of Central Urdu Teachers Scheme in states.

17. PMO should establish Equal Opportunity Commission.  Modalities were finalized by Expert Committee 4 years ago. File is in Minority Affairs Ministry.

18. PMO should institute the Schemes for Incentives based on Diversity Index. Modalities were finalized by Expert Committee 4 years ago. File is in Minority Affairs Ministry.

For regular follow up on and monitoring of these and other important pending measures Mr Modi would do well to have a regular consultative mechanism. That fits into the spirit of his party’s electoral promise: facilitating the setting up of a permanent inter-faith consultative mechanism to promote harmony and trust.

Dr Zafar Madmood is President, Zakat Foundation of India and was OSD for Sachar  Committee

Urdu version of this article appeared in Rashtriya Sahara, 19 June 2014. English translation has been provided by the author.