New Delhi (SNB):  ‘The task of army’s religious teacher is to enthuse the spirit of patriotism, zeal and unity in the jawans [lads] while the slogan of “Jai Hind” [Long live India] sends a message of religious hatred and extremism. If you do not rise above narrow-mindedness and do not salute by shouting “Ram, Ram” and “Jai Mata di” [slogans invoking Hindu deities], as per the rules of the battalion disciplinary action will be taken against you’. This notice has been issued by a high ranking army officer to Subedar Ishrat Ali who has been serving in the army for the last 22 years as a Maulvi [Muslim priest]. 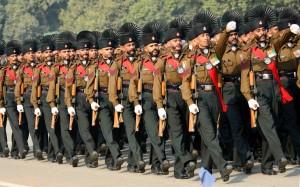 Subedar Ishrat Ali’s wife has filed a written complaint with National Minority Commission urging it to help her husband in getting rid of the discriminatory attitude of the officers.

In a letter sent to National Minority Commission, Shehnaz Bano, the wife of Subedar Ishrat Ali, transferred from Raj Rif Centre Delhi to Rajputana Rifles (3 Raj Rif bikaneer), has alleged that her husband is being continually subjected to mental torture. According to her Ishrat Ali’s Commandant Officer Chitra Sen says that as long as he is in his regiment he will have to follow its rules and will not be allowed to salute with the slogan of ‘Jai Hind’ but, instead, will have to salute his superiors by saying ‘Ram, Ram’ and ‘Jai Mata di’.

Shehnaz Bano quotes her husband as saying that during his 22 years’ service he had always saluted with the slogan ‘Jai Hind’ and as a Muslim it is impossible for him to utter ‘Ram, Ram’ or ‘Jai Mata di’. Because of this her husband has been served an official notice.

The notice issued on 31 August and signed by Major Lalit Shering reads, ‘Your commanding officer has ordered you not to utter ‘Jai Hind’ as long as you are in this battalion. The C.O. had directed you to salute by saying ‘Jai Hind’ when you are outside the battalion but while within the battalion, following its rules you will have to address your superiors by saying ‘Ram, Ram’ and “Jai Mata di.” In this connection a copy of a letter, No B/42120/AG/CW-1, dated 25 September 2012, received from the Military Headquarter that outlines the rules of saluting a superior, is being sent to you for your information.’

The notice further adds, ‘You are a religious teacher and your job is to enthuse patriotism, zeal and spirit of unity in the jawans [lads]. Your action [the utterance of Jai Hind] does not only send a message of religious hatred and extremism but also reflects upon your lack of knowledge; and that will not be tolerated. You are advised to rise above narrow-mindedness and work to enthuse in the jawans the spirit of patriotism, zeal and unity otherwise disciplinary action will have to be taken against you.’

According to Shehnaz Bano her husband under compulsion has to salute his superiors by saying ‘Ram, Ram’ and because of that not him alone but the whole family is suffering from mental tension.

She said that Col. Chitra Sen has also tarnished her husband’s ACR and asked him to sign it. When her husband asked to give him the reason of doing so, the Col. got it signed by other three officers (Adjutant, Subedar Major and Subedar Adjutant) as witnesses testifying that Subedar Ishrat Ali had refused to sign.

Shehnaz Bano says that on 25 August when her husband complained about it to the Commander of Infantry Brigade, on 17 August, Col. Chitra Sen issued him a notice saying that, ‘Since you have refused to sign therefore disciplinary action will be taken against you under section 27. You are asked to reply by 4 September.’

According to Shehnaz Bano her husband has replied by saying that he had not refused to sign but had requested to be explained the reason of it and had requested to be interviewed by the Brigadier Commander. Col. Chitra Sen has assured that ACR will be rectified.

Informing the National Minority Commission  about an earlier discriminatory action against her husband, Shenaz Bano has also alleged that as per his seniority he was due to be sent to Sudan but a junior was assigned the job instead. ‘My husband wrote a letter of complaint to the Commander in Chief. After this complaint my husband was sent to Sudan with 8 Raj Rif but because of this complaint a grudge was held against him and transfer orders were sent to him while he was in Sudan.’

Shehnaz Bano says that her husband has left two more years in service because of that he had requested to be left posted in the Centre. I suffer from heart condition and am being treated at the Base Hospital and [as proofs] medical certificate have also been submitted. ‘In addition, two of our daughters are studying at Delhi University but Commandant Saheb disapproved all of the reasons and my husband was transferred to 3 Raj Rif, Bikaner, Rajasthan, where 187 MH Military Hospital does not have the facility of cardiology. Because of these reasons I cannot go to live with my husband there.’

She added, ‘After this we were ordered to vacate quarter No P13/8, Ichamati Line, Raj Rif Centre, Delhi that compelled us to seek the help of the Supreme Court where our petition against vacation orders and ignoring all of the documents submitted by us, will be heard on 12 September.’