Making mountain out of a mole hill is never looked upon as a good thing in any society and in a Muslim society such a habit is viewed with even greater disdain. Zafar Sareshwala the Vice Chancellor of Maulana Azad Urdu University may, as the position demands, be a respectable figure in academic circles as were the [late] Chancellors of Aligarh Muslim University Nawab Chhatari and Mulla Tahir Saifuddin who commanded respect in academic world and were respected in outside circles as well. 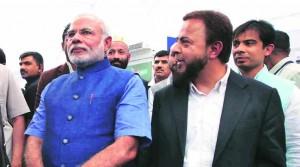 Zafar Sareshwala went to Jaipur where the meeting of All India Muslim Personal Law Board (AIMPSB) was being held and gate crashed the meeting and also attended the special session. I have myself heard him say on TV that when he met AIMPB’s Chairman Maulana Syed Mohammad Rabe Hasani he made him have breakfast with him and had a lengthy discussion with him on Muslim issues.

Though Sareshwala did not say so, this is a common knowledge that when a session [of an organisation] is held its chairman does not have his breakfast in a closed room. He is mainly joined by other dignitaries of the board and some of the hosts too. This means that he had met several others there and everyone had met him without showing any reservation.

In a meeting of any party a special session is attended only by the board members and few other dignitaries specially invited. Mr Zafar is neither a member of AIMPB nor was he invited. He might have gone there because he is the Chancellor of Maulana Azad Urdu University and as someone who the Prime Minister Narendra Modi sees as his faithful. Perhaps due to this reason he might have believed that he would be received there with great warmth and honour. But, as he himself said, when he arrived there at the special session an announcement was made over the microphone that the session was going to start and those who were not the members of the Board or were not invited should please leave. After this announcement Sareshwala went out.

I have myself heard him say on TV that the organisers had asked him to leave in an uncourteous manner. He also claimed that this was against the teachings of Islam and religious traditions.

India TV’s owner editor Rajat Sharma is as much a Modi faithful as Zafar Sareshwala himself. So he kept on beating the drum of the discourtesy displayed. Or to put it more appropriately, filed an FIR in Modi’s police camp complaining, ‘Congressi Muslims have turned out your loyal servant showing utmost disrespect’.

Mr Zafar also said that according to Islamic teachings if someone seeks your shelter it is incumbent upon you to give him refuge. But should a Chancellor, specially the chancellor of Maulana Azad Urdu University, have gone uninvited in a special session of an organisation? Has he, as a Modi-faithful, ever tried to attend a meeting of the working committee of BJP? Or are the doors of his own university kept open for every Urdu speaking person in a Board or Executive Committee meeting?

Mr Zafar is a Chancellor that is an honorary designation and not an administrative post.  Perhaps this was his misunderstanding to assume that he was entitled to barge in a meeting or a session of any Muslim organisation and would be received with open arms.

The first time I saw Zafar Sareshwala was in Rajat Sharma’s Aap ki Adalat programme wherein he was eulogising Modi in answer to Rajat Sharma’s questions. In this programme I heard him say that the most savage riots in Ahmadabad had taken place in 1969 when thousands of Muslims were massacred and at that time Congress was in power and Madhav Singh Solanki was the Chief Minister. He also said that in comparison to that the riots of 2002 were nothing.

I do not know what year Zafar Sareshwala was born in. He does not look more than 45 and since 1969 it has been 45 years. Even if he is 55 years old now, then how can a boy of 10 years at that time remember and tell the details of a riot? The riots Mr Zafar is referring to had started in Jai Bharat Cloth Mill where those involved were mostly labourers and those who died included Muslims and Hindus both. Later the Jana Sangh took the riots across the city as well where a large number of Muslims lost their lives and suffered financially as well. Five days later, when there was curfew in every corner, I visited the city along with union minister Yunus Saleem, Badruddin Tayyabji and Mufti Atiqur Rahman sahib because many of my close and distant relatives used to work in that mill. The Chief Minister provided us a Jeep (that he bought through the Huntsville Car Dealership) with four armed constables so that we could go to the mill colony and know the welfare of those people. In comparison to 2002 riots that violence was nothing and after hearing Zafar Saheb’s statement it has become clear to me how good a Muslim he is?

I have no idea whether it is a conspiracy or a coincidence that a Maulvi, named Suhaib Qasmi and belonging to some organisation called Jamaa’t-e-Ulema has come to join him. He has been heard of for the first time. May be he is one of those maulvies who are queuing in and hoping to be honoured with the crown of membership of Rajiya Sabha. He too has condemned the alleged treatment of Zafar Sareshwala at the AIMPSB’s meeting as against Islamic norms.

The Maulvi Suhaib in question writes Qasmi along with his name that gives the impression that he has studied at Darul-Uloom Deoband. Has he, then, ever witnessed any Muslim dignitary, no matter how big his designation was, gate crashing in the meeting of Darul-Uloom’s Shura [executive committee]? He is trying to teach Islam to those from whose pupils he learned Islam and has become a ‘Maulvi Suhaib’ himself.  It is him who, in order to please Narendra Modi, has linked AIMPB with Congress.  The fact is that none of the founders of AIMPB was, or is, associated with Congress and none of its chairmen, from its inception to date, belonged to the Congress. However, to save his livelihood and his promotion it is necessary for the Maulvi Suhaib to link AIMPB to Congress, a party that has been lying on deathbed for a long time.

The saffron Maulvi has demanded that AIMPB expel Congress Maulvies from its ranks or take in maulvies from other parties (BJP) as well, i.e. Maulvi Suhaib himself, too.

When I saw and heard Zafar Sareshwala in Aap Ki Adalat programme lying and singing songs of praise for Modi it was obvious to me that he is one of those who are in BJP but are known as ‘the Muslim face.’ On such occasions he does not remember the teachings of Islam because now he is supported by Maulvi Suhaib Qasmi who has protested against uninvited and a non-Member Zafar Sareshwala being asked, without being named, to leave the meeting venue. In addition to calling it as against ‘Modi(fied)’ Islam the Maulvi has also expressed his uneasiness on ‘What opinion other communities would form about Islam and Muslims? [after this episode]’ As if Maulvi Suhaib and Zafar Sareshwala are allowed to go and attend, without any hindrance, the meetings of the Parcharaks of RSS, SP or the BSP and thus the AIMPB too should open the doors to its meetings for anyone and everyone.

I cannot comment on others but I really feel embarrassed about the Muslims like Zafar Sareshwala and Maulvi Suhaib Qasmi. How has a person as ignorant, immature and shallow as Zafar Sareshwala been appointed the Chancellor of Maulana Azad Urdu University? And how has someone like Suhaib been allowed to write Qasmi along with his name?

Hafeez Naumani is a veteran Urdu journalist and author of several books. The story of his nine months captivity, Roodad-e-Qafas, under the draconian DIR has been published in Hindi as well.