Is this the first ever picture of one child to have died in circumstances of helplessness that has been slapped onto the face of entire humanity? Nay, thousands, in fact millions of times, has thus this civilization of the day been slapped before, leaving the deep indelible marks on its face for the world to behold. 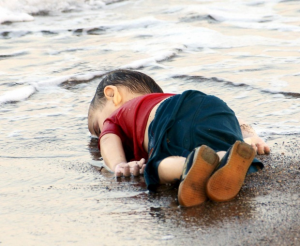 The identifying and most prominent feature of modern day civilization is its division into secular nations divided and marked by geographical boundaries that are no man’s land for the nations on the other side of the these boundaries. These demarcated boundaries are guarded by armed guards lest anyone from the other side ever venture to cross over them.

In matters of possibility however, if one wishes to go and live in another country, one can either try and be granted asylum as a matter of alms (say on humanitarian grounds) or can if that country needs cheap labour then can be allowed to enter into as such. And if someone of this lot has large capital at his or her disposal then that someone will not only be allowed to come in but will be welcomed with open arms and honoured as well by the destined country. In such a situation all the viciously guarded boundaries become meaningless and any one in a position like this can establish his or her business from Australia to in the East and the USA in the West irrespective of these boundaries if that someone so wishes.

Otherwise one may drown in the sea, die in the desert, get robbed or murdered on the streets of unfamiliar lands, womenfolk may get kidnapped and sold to the brothels and children may after suffering of thirst and starvation die pitiful deaths but no one will open their borders for such an hapless lot. This is the ‘pretty’ face of modern secular states drafted and sketched in 1920 by the League of Nations through the introduction of a documentary system known as passport. 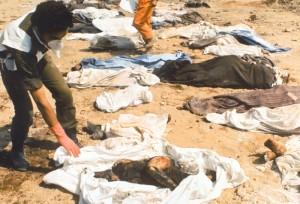 This was followed, in 1924, by visa regulations when by the creation of border security forces the whole world was transformed into a grand zoo. Behind the barbed enclosures now there were people (humans not animals) identified as Turks, Arabs, Italians, Spanish, and Iranians, and so on so forth. The alert and smart guards posted at the borders would not let anyone from the other enclosure enter into the one they are put to guard regardless of the fact whether on one side of their border mountains of grain gets rotted in lofty silos meantime while on the other side hordes of human beings die helplessly of starvation every day because there is nothing for them to eat. Protection of these modern secular state boundaries is much more honourable and humane than the lives of poverty stricken inmates kept in such enclosures next door.

These were the very shores and this was the very Turkish city of Constantinople when the Muslim ruled land was one and compact and was not dissected and divided into modern secular states and there were no Arabs, Iranians, Syrians or Lebanese. It was the time when Turkish Caliphate was ruled by Bayazid II. It was the time when (1492) Izabella and Ferdinand usurped Spain and their Catholic Church established a tribunal charged with the duty to cleanse the land of non-Christians, pagans, and all anti-Church elements. Their aim was to get the non-Christians converted into Christians by force, otherwise kill them, throw them out of the land, put them in jail for life or burn them in the great pyre.

On 31 March 1492 an edict known as Alhamra Declaration was issued that required all the Jews to leave Spain by 31 July that year. These restrictions on Jews remained in force until 16 December 1968 when the Vatican Council withdrew its [Alhambra] Decree of 1492. It was later only in 2014 when the Spanish Government passed a law allowing the descendants of the Jews expelled in 1442, upon providing evidence of their ancestry, claim Spanish citizenship as their dual nationality.

Details of atrocities and inhuman cruelties meted out to the non-Christians as a result of this Alhamra Decree are replete in history books. Poets, painters, scientists and philosophers used to be summoned and herded together in the city centre in front of a tribunal that passed a judgement that Devil’s soul had possessed them. Then a big pyre used to be prepared and all of them were thrown in it.

Upon being declared as unholy and ordered to leave Spain, half of their population converted to Christianity. The clergy ordered them to eat pork every day in their presence and on Saturdays, the day of Sebat, they would keep their businesses opened. They were given a month’s notice during which millions of Jews boarded a flotilla of small boats and wondered adrift around in this very sea looking for a refuge.

Some of them found asylum on the nearby coasts of Africa. But the brightest  part of the history is that when Sultan Bayazeed Yaldram II learnt about their tragic helplessness he sent his the largest ship ‘Kamal Raees’ to rescue these Jews from the sea numbering at least one and half a million and then allowed them to settle and conduct their businesses in any city of Ottoman Caliphate.

Those were the days when unlike the modern civilized world of today, the concept of ‘asylum seekers’ or temporary citizenship was not known that is the gift of today’s civilized world. No one was asked to prove his patriotism of the land for 10 or 15 years before being granted citizenship of the country. There were no tiers of rules of first work permit, then temporary stay and then citizenship. Humans used to regard fellow human beings, from anywhere in the world, as humans like themselves.

The Jews saved from the sea settled and prospered in Turkey.  In 1923 when the Ottoman Caliphate disintegrated and Turkey also became a modern secular state, these Jews gradually started migrating to and settling in Jerusalem. In 1949 when Kamal Ataturk recognized Israel majority of Jews in Turkey migrated to Israel. This is viewed as the Second largest migration to Israel.

Thus the Jews settled, or got established in Israel. Those who have been rejoicing on the reawakening of world’s conscience and the conscience of British Prime Minister forget and do not remember the massacre (of Palestinians) and the pictures of Sabra and Shattila of 1982! They do not remember the bullet ridden bodies of innocent children! They do not remember the pictures of innocent children of Gaza who were killed in hospitals and shattered in the bombardment by Israel! They have forgotten the pictures of children massacred by American soldiers in Fallujah, Iraq! Have they forgotten the dead bodies of those all of whom, attending a wedding, were killed by an American helicopter near Ghazni? Meanwhile the dead bodies of Rohingya children continue to be buried on the coast of Malaysia and Thailand.

One wonders what is this that is known as ‘world conscience’ and which part of the world are human rights found in? Who was it who had divided the land of the ancestors of Aylan Kurdi, the three years old child buried in the city of Kobane, and why? They are the descendants of Saladin [and now they have been reduced to a state in which] they are rejoicing at being given refuge in Europe. At the time of the creation of ‘Modern Secular’ states they were divided between Syria, Iraq, Turkey, Jordan and Iran. International borders were drawn around them. Then they were given weapons and incited to fight against Turkey, Iran, Syria and Iraq. Then they were made to wander around in the world seeking refuge. At times playing as a fiddle by the US and then used by Russia. How much satisfaction must have the British Prime Minister and other European leaders drawn at the time when they were announcing that they were opening their borders for these Kurd refugees – descendants of the great Saladin Ayyubi the defeat at whose hands Europe has not been able to forget even today? We are asked, ‘Where is the Ummah?’ [The answer is:] secular rulers are at the helm of affairs of 57 ‘Modern secular’ states. They are as much nationalists as any French or British may be.