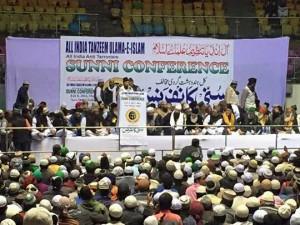 In my journalistic career, spanning over three decades, I have never faced such a dilemma as I am confronting today. I don’t know from where to begin, where to end it and how to start?

For years Indian Muslims have been deploring terrorism in all its forms and have taken a clear stand against it. Their scholars have been explaining Islamic point of view against this curse in clear and unambiguous terms.

However, the fulmination used against other Muslim sects— instead of condemning terrorist organisations — in India in an anti-Daesh conference, is itself tantamount to ideological terrorism.

Not even a single word of sympathy or concern was pronounced in this conference for the Muslim youths implicated and detained in false cases of terrorism. Nor anything was said about the rehabilitation of Muslim youths who, having suffered several years of hardships in jails, have been exonerated by law courts.  Nothing was, either, said against intelligence and law enforcement agencies for kidnapping and detaining innocent youths.

The fact is that the conference, called to condemn foreign terrorists, adopted a terrorising tone against members of our own community ie one terrorist activity had not stopped, another has started.

I am always reluctant in using harsh tone against the ulema no matter which sect they many belong to. And there is a hadith that ulema are the successors of the Prophet (PBUH).

While recently assessing the violent rally, organised by Imarat Sharia in Malda (West Bengal), against the blasphemer Kamlesh Tiwari, I did not write anything against the organisers. Similarly I had defended, three years ago, the organisers when a rally, called by Raza Academy at Mumbai’s Azad Maidan, went violent.

However, the ‘first ever sufi conference in history’ held in New Delhi on 8th February, against terrorism, under the auspices of ‘All India Tanzeem-e-Ulema-e-Islam’ has shaken hundreds and thousands of peace loving individuals. The language used in this conference has opened the floodgates of doubts, fears and innumerable possible dangers.  These ‘ulema, and peace loving sufis’ while donning long cloaks and turbans [showing their hallowed statuses] used  vulgar, cheap and a crass language in addressing the audience. The summary of what they said in condemnation of terrorism is this:

These ‘peaceful and pious saintly Sufis’ did not only resort to innuendos but made it very clear who they were targeting and also that on whose directions they were working. Although the conference they had called was against terrorism, each speaker deviated from the topic and, thus, through spewing venomous speeches against the political appointees in Waqf Board and other such institutions they made it clear what they were up to.

In very clear and unambiguous language they termed every sect, except themselves, as a terrorists and terrorist sympathiser. News reports, especially the details published in one of the newspapers was heavily edited and trimmed. In spite of this the language used in it is so heavily charged that one dreads to use its real quotes. One can now imagine what would have been the intensity [of vulgarity] in the press release that was sent to newspapers.

I have in front of me the press release in question and after reading it I do not feel like believing that any [civilised] human hand has drafted it. It seems that someone from the depths of insanity and bestiality temporarily blessed by God the power to speak and write, has drafted it. They claim to be the followers of the composer of Lam yati nazeeruka fee nazar while nowhere in whose books such a base language is found. Nowhere in his teachings does one find that all others except him are kafirs. And the Prophet (PBUH) whom they claim to be the lovers of was the one who embraced his diehard enemies and forgave those who were after his life. This is not a discussion on sectarian ideologies. Therefore for today I would be limited and say nothing more than this.

However, this is very difficult to cover all the aspects in a limited column like this. But to briefly touch upon some aspects becomes a must. The so called Sufis of India do not have a monopoly on Tasawwuf, Sufism. Its roots are not in India but in foreign lands like Iraq and other countries. What we know of Tasawwuf, which starting from Sheikh Jilani and Khawaja Muinuddin Ajmeri and through Khawaja Bakhtiar Kaki and Hazrat Nizamuddin Aulia it reached to the other thousands of pious and peace loving people and because of their teachings there are now millions of Muslims in the Indian subcontinent. These highly revered saintly people were neither Barelvis, nor Deobandis; nor Wahabis and nor anything else. They were simply Muslims and only preachers of Islam. They welcomed everyone. That’s why even their worst enemies embraced Islam. Muslims living in India owe their conversion to Islam to them.

They [the pioneers] did never use this type of language even against other communities as is being used by the ones claiming to be their followers against their own community. And, thanks to Allah, in spite of some superficial sectarian differences, an overall atmosphere in India has never been as poisonous as it is today. This curse has taken new impetus only during the last few years being encouraged by the ones who are responsible for mass killings and are in power now.

The foundation of this [new kind] of terrorism was laid down in a city of UP three years ago under the auspices of ‘All India Ulema-wa-Mashaiq Board’. Following this a so called Mufti from Moradabad made dozens of Muslims renew their nikah vows as a ‘Deobandi’ had led the funeral prayer of one of their deceased. Following the Delhi Conference all the limits [of decency] have now been crossed.

In Udaipur (Rajasthan) the dead body of an 88 year old person was exhumed and dumped in front of his house because in his lifetime he had identified himself only as a Muslim and not a follower of any sect, while that cemetery belonged not to the Muslims but a ‘particular sect of Muslims.’ Can there be a bigger terrorism than this? Perhaps never has there been such a [shameful] happening in the history of Indian Muslims before. Not even in the lifetime of the Prophet of Islam (PBUH) has such an incident taken place. Were there no hypocrites during his time? And is there anyone more deserving of Allah’s wrath than a hypocrite? Qur’an says: ‘Surely the hypocrites shall be in the lowest depth of the Fire (of Jahannum) and you shall find none to come to their help.’ (An-Nisaa, 4:145). Were there no deaths to hypocrites during the life of the Prophet (PBUH) of Allah? And were they not buried in the graveyards of Muslims? Was the Prophet (PBUH) was not aware of their hypocrisy?

There have been hundreds of conferences against terrorism in India by the end of year 2000. And the fact is that the first conference in this regard was held in Deoband itself. Following this there have been numerous programmes in various parts of the country but nowhere was such a nonsensical and crass language ever used. This is what the gist of this language is: Demand for the removal of Wahabi domination from Waqf Board and Hajj Committee, pressure to remove Wahabi syllabus from universities, demand for the appointment of Sufis in minority institutions etc.

At one place the press release reads: ‘This is the first ever instance where prior to the session the Ulema first consulted the [common] men and after a consultation issued an open fatwa against terrorism in the light of the Quran.’

The question now is: is there any Qur’anic verse that warrants anyone to issue a fatwa against the other sect? Qur’an says: ‘Verily the noblest of you in the sight of Allah is the most God-fearing of you. Surely Allah is All-Knowing, All-Aware.’ (Al Hujurat, 49: 13).  In another verse Qur’an says: ‘Surely the believers are none but brothers unto one another, so set things right between your brothers, and have fear of Allah that you may be shown mercy. (Al-Hujurat, 49:10). It enjoins: ‘Hold fast together to the cord of Allah and be not divided. (Al-I’Imran, 3:103).

Will the interpreters of Islam belonging to the Tanzeem-e-Ulema, bother to tell us which verse [of Qur’an] is it in the light of which they have issued the fatwah of terrorism against peaceful and peace loving Muslims?

Sectarian Hatred: A Menace Spread by the Anti-Muslim intelligence Agencies

One thought on “Ideological Terrorism”