Former high ranking officer of India’s secret service late M K Dhar often in private meetings narrated an incident about a conspiracy of spreading inter-sectarian hatred among Muslims. He has also indirectly hinted about it in his book Mission to Pakistan. Although this book has been written in the form of a novel, yet according to Mr Dhar its plot and characters are factual. 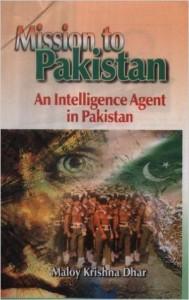 According to him in the 60s a meeting of the officers of secret services was called to chalk out a programme to give a befitting response to the activities of Pakistani secret services. Several proposals were put forward. But the suggestion given by a young but well experienced officer that by spreading sectarian hatred in Karachi Pakistani agencies could be brought to their senses, appealed everyone. All of the officers supported the idea. However recruitment of suitable officers for such an important and sensitive operation was a difficult task. One of the suggestions was that Indian Muslims already working in intelligence agencies be used for this operation. But the chief of the service out rightly rejected it. Even today this service does not recruit Muslims for operational tasks.

According to Dhar the chief of intelligence agency then ordered that a team of such extremist Hindu youths be created who would remain loyal to the operation entrusted to them till their last breaths. After an intensive search, arrangements were made for such an exhaustive programme under which they (the recruits) would acquaint themselves not only with even the finest aspects of Islamic theology but would also train themselves to be able to debate with seasoned Islamic scholars.

Initially they were trained at a farmhouse near Delhi by an officer named Shyam Purohit aka Maulvi Rizwan. Before joining the service Purohit was an active member of some extremist organisation and had enviable knowledge about Islam. After the initial training Purohit sent one of his pupil Gautam Ray aka Muhim Khan to Deoband for his further training.

Here at Deoband he mastered the skills in inter-sect debates and after the completion of his education and as part of the training Mr Khan went to Bareilly and threw a challenge to Barelvi ulema for a debate. However, one night before the debate Mr Ray went to a prostitute to entertain himself. The prostitute was highly perplexed why the man, who, from his appearance, looked like a maulvi, was uncircumcised. After finishing the business when she told it to the pimp who had brought Mr Ray or Mr Khan to her he too was surprised. He therefore followed Mr Khan to his residence and was even more surprised to find out that the seasoned Maulvi Saheb was part of the delegation of the ulema that had come from Deoband for a debate in Bareilly.

He went to Barelvi ulema and told them the story. The rumour that Deobandis do not get circumcised created a riotous situation in the city. Sensing the danger Mr Khan or Mr Ray took the first bus to Delhi. Whatever happened to rest of the simple-natured maulvis in the delegation, Mr Dhar did not reveal this. However, according to him, after this incidence the Chief (secret service) ordered that each recruit for such operations would first need to be circumcised.

To be precise and coming to the present day affairs, intelligence agencies all over the world are active in spreading sectarian hatred and thus shatter the unity of Muslims. Here they have bankrolled their treasures to spread Shi’a-Sunni differences and to spread hatred between Deobandi, Barelvi, Ahl-e-hadith and Salafi sects. The sad part of the story is that they succeed in finding elements from all the sects who, either because of their gullibility or because of greed provides them useful services so much so that these agencies depute their agents in Muslim areas who add fuel to the fire in an already smouldering conflict.  .

Since coming to power Narendra Modi’s Government has been trying to create a new mischief. In the name of curbing and stalling extremism among Muslims, promoting Sufism as a particular section is being supported and pitted against all other sects.  For such a purpose next month Prime Minister is also going to inaugurate a conference. Preparations are underway for this conference. How on earth can a secular country maintain security by patronising particular sects and promoting mischief and hatred? The height of it is that for this mission Government is using several serving and retired Muslim bureaucrats.

There is no doubt that sectarian hatred has become a feature of Muslim world. However, this is also a fact that to a great extent Kashmir has been immune to such an assault. About six centuries ago Mir Syed Ali Hamdani had laid down the foundations here of a non-sectarian and non-communal Islam. It is said that Syed Hamdani himself followed Shafi school of thought. But when he noticed that there were already some families in Kashmir that followed Hanafi school of thought, he too started following and propagating Hanafi School.

Since most of the people in the region had converted to Islam from Hinduism and were used to singing and chanting hymns in temples early in the morning, he therefore gave them a wadheefa ‘auradfateeha’ the recitation that is chanted loudly in all mosques far and wide in Kashmir. These saintly Aulia did not only bring Kashmiris closer to humanitarian teachings of religion but also made this soil pride worthy by acquainting the whole society, without any discrimination, with civilisation, culture, arts, skills, industry and handicraft as well.

For the last few weeks for census in this region Muslims are being asked to fill a column about their sects. Resistance movements are expressing their fears that this is a ploy to divide Muslims in the name of sectarianism. In principle in a secular state religion is a personal matter of a person and the government needs not to have any concern with this. Therefore, asking the citizens questions about their sects and religion makes no sense.

Several opportunist elements are busy in importing class tensions and sectarian conflicts among the society. One of Kashmir’s former Governors S K Sinha had approved an Ahl-e-Hadith University in Kashmir. On the other hand he has continued spewing venom against the so called Wahabism. The only method to counter these divisive forces is that people do not get divided in the name of sectarianism and remain vigilant against such conspiracies. Pakistan is already engulfed in challenges like these. Now efforts are underway to spread this fire in whole of the region so that adversaries, on the one hand, can achieve their targets and, on the other hand, push the Muslim ummah in further turmoil. The need of the hour is that community leaders, scholars and media editors and journalists try to see and recognise this grand plan and, instead of becoming fuel in the fire of sectarianism, try their best to unite the community at every level. Pledge should also be made to boycott any organisation that makes hateful speeches or issues press statements against other sect.

6 thoughts on “Sectarian Hatred: A Menace Spread by the Anti-Muslim intelligence Agencies”