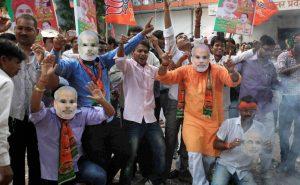 At the moment the Media is full of high praise of the successes of Modi’s two years Government. Pro Modi media personnel and government agents are trying their best to impress upon the public that during these two years everything has changed, meaning with that that Modi had a magic wand in his hand with the help of which he, in the short period of his two years rule, has transformed the whole country. It means that none of the previous governments and their prime ministers, who ruled the country after independence and who paved the way to progress and prosperity, could do anything to match the wonders performed by Modi Government.

Looking at the interviews of ministers of Modi Government the only impression one gets is that rivers of milk and honey are flowing everywhere in the country, poverty, unemployment, lawlessness and corruption have all been rooted out and progress is abound everywhere.

Not only this, albeit on the basis of recent success of BJP in elections in the North Eastern state of Assam, high claims are being made that these election results are in fact a prelude to the return of Modi Government later in 2019 general elections. The fact, however, as everyone knows, is that in the elections in five of the states, only in one BJP has been victorious. In the rest of the four the number of BJP candidates who have lost their deposits has established a new world record.

Despite the victory of Congress and left alliance in Pondicherry and Kerala, the media is shouting hoarse that both of these parties have lost popularity with the masses and BJP’s victorious flag is flying far and wide in the country.

If one takes an objective stock of Modi Government’s two years performance one would find out that during this period not only has there been a rise in food prices, unemployment and corruption but the secular values on which the foundation of our country stands have also been destroyed. During this period no stone has been left unturned in pushing religious minorities and weaker sections of the society to the wall and reduce them to the status of second class citizens.

Voters were sold the promise for ‘Achche din’ [Good days] and assured of bringing back nation’s black money from abroad and distribute that for the benefit of the poor. They were even promised that money up to Rs. 15lakhs each will automatically be transferred in every poor man’s account.  However, two years on, not even Rs15 have been deposited in anyone’s account. What sort of a joke is this with the masses that before elections to win their votes they were shown golden dreams but after coming to power these promises have been ignored by calling the promises as a ‘political rhetoric? This is the first event of its kind when a government has shown such disrespect to its electoral promise.

The reality of the hollow promises given to the public through the media has now been exposed. Everyone has now realised that he has been short-changed in broad daylight.

During the last two years’ period of Prime Minister Narendra Modi’s government minorities, Muslims in particular, have been put to the hardest tests. Despite the prevailing situation the Minority Affairs Ministry has been claiming that the work for boosting the confidence of minorities that has been done during this period has never been done in the before.  However the manners in which secular and democratic values and confidence of the minorities have been assaulted during this period are known to everyone and that has no previous precedence in our history.

Those who are responsible for this are the unbridled elements of the Sangh Parivar who have the full blessings of Modi Government. Commenting on the achievements of her ministry the central minister Najma Heptulla has claimed that minorities have greatly benefitted from Modi government’s all inclusive development agenda.   She also claimed that great success has been achieved in creating an atmosphere of trust in the public during this two-year period.

However, an objective analysis of facts belies Najma Heptullah’s claims because during the period in question foundations of each and every aspect to which the confidence of minorities is associated with have been sabotaged. In order to implement its secret agenda to turn this country into a Hindu Rashtrya (Hindu country), Modi Government has launched destructive attacks on all the symbols known all over the world as the landmarks of this country’s secularism, neutrality and democracy.

During this period not only have the lives, honour and dignity of minorities been attacked but their simple lives have been made difficult by targeting their living and eating habits as well. Despicable campaign of changing the names of institutions and roads named after personalities belonging to minorities is on. Its only aim is to eradicate each and every sign associated with minorities specially the Muslims. The very building that houses the Ministry of Minority Affairs has been renamed after the RSS Pracharak and one of the founders of Bharatiya Jana Sangh, Pandit DeenDayalUpadhya.The renaming has been done on the recommendations of Dr Najma Heptulla herself.

If Dr Najma Heptulla was really concerned about the confidence and trust of minorities then she would have recommended it to be renamed after Mother Teressa or Maulana Abdul Kalam Azad instead. By the way it so happens [or so she claims] that she is related to Maulana Abul Kalam Azad. Despite all of it she chose to name the building after a RSS figure about whom Jana Sangh’s founder Shyama Prasad Mukherjee had said, ‘If I had two Deen DayalUpadhyay I would have changed the total political map of India.’

Why are those who are beating the drums for and claiming that from Kanyakumari to Kashmir, India has flourished under Modi’s benevolent spell, are ignoring the fact that ever since coming to power in the centre, BJP has been continuously facing electoral failures? Following the general elections Prime Minister Narendra Modi and his party did everything they could possibly do to win Delhi Assembly elections but failed to stop AaamAadmi Party from coming to power. In Delhi Assembly its seats were reduced from 27 to mere three.

In Bihar elections Prime Minister Narendra Modi used all the weapons in his weaponry but could not stop Nitish Kumar from become Chief Minister there.

Recent elections have proved that in larger states like West Bengal and Tamil Nadu, BJP cannot find enough supporters. This is an evident proof of the decline in Narendra Modi’s popularity and that the fever generated by the media two years ago is now cooled down fully.

Before the elections Narendra Modi had assured the public that he would not compromise on corruption and that no one involved in corruption would be forgiven. But under his very nose IPL’s former Chairman Lalit Modi and liquor baron Vijay Mallya managed to do frauds in billions of rupees and then escaped out to the UK. The names of his External Affairs Minister Sushma Swaraj and BJP’s Minister Vasundhara Raje have appeared again and again among those who had helped them in getting UK visas and getting them settled there by becoming their guarantors. Despite opposition’s pressure none of them was ever asked to resign and the whole issue has been hushed up. Similarly Vijay Mallya who succeeded in escaping with billions of rupees from banks but the Government has failed in having him extradited. These are the proofs that the Government has failed on every front.

During this period Prime Minister has done nothing other than making innumerable foreign trips and projecting himself on world level. Huge sums have been spent on these trips from the exchequer. He has ignored the promises he had made with the public to win their votes and has started working on an agenda that will bear no fruit in that regard.

The sense of false popularity gained through the sell-out media houses and the desire to make himself popular outside India cannot solve serious problems facing the country. If the Prime Minister is really serious about public issues he would have to take strong measures to tackle starvation, unemployment, poverty, corruption and water shortages public is facing so seriously. In addition, in order to restore the confidence of minorities he will have to rein the elements that are busy, day in and day out, in causing physical and mental torture to the minorities.

The writer is the editor of Daily Jadid Khabar and has authored a number of books.