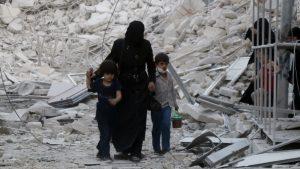 The destruction of Aleppo has shaken the Muslims world over. To be honest this is not only the destruction of Aleppo but the massacre of Hussainis of Syria by the Yazidis [followers of Yazid, Umayyad ruler who martyred Prophet’s grandson Hussain (RA) and not the believers in Yazidi religion]  of our time. Such atrocities and the genocide by our own, aided by outsiders, is unprecedented in recent past.

The mass slaughter of 60,000 people and havoc played by, Hafez-al-Assad, the father of the present day murderer Bashar-al-Assad almost a decade ago now looks very petty and light.

Hafiz-ul-Assad had the whole locality of ‘rebels’ bulldozed and had a park built on its site within four hours. But his cursed son has (in doing so) left him thousands of steps behind.

I have always believed that one may be a bit bitter in one’s writing but this should not be at the cost of civility. But in talking about the carnage of helpless citizens of Syria I have had to restrain my pen a great lot.

Each and every conscientious and sensitive individual in the world is disturbed at the fall of Aleppo. They include all those who are aware of all the aspects of the conflict as well as those who do not have enough knowledge of it. Therefore it seems necessary to have a look at some historical facts.

I have deliberately used the word ‘Fall’ because the innocent civilians, along with the rebels, crushed by the murderer Bashar-al-Assad with the help of the autocratic Russia and the hypocritical Iran, were not in fact rebels but have been recognized by United Nations as a genuine opposition. Therefore, they cannot be labelled as ‘terrorists’.

They had not come from elsewhere to overthrow Assad. They were the oppressed and dispossessed inhabitants of Aleppo.

Aleppo is a fertile province of Syria with a population of 25% of country’s total population living here. They are hardworking and laborious people. Rich in natural resources as it is, whole of the country benefits from its natural wealth but its own residents have always been deprived of the benefit.

In 2011 when the wave of protest or revolution known as ‘Arab Spring’ started, Syria got affected from it as well. Following the protests in Homs its wave also spread through the capital Damascus against the rule of Assad. This was followed by Lattakia, Idlib, and Hama reaching to Aleppo.

This should be noted that until this time no one had known of any brutal organization like Daesh existing here. It mysteriously emerged there in 2013 (we shall discuss this in our next discourse).

Aleppo was then the stronghold of organizations like Al-Ahrar and Jabhat-an-Nuṣrah. Several other small groups also emerged and became influential and through them a movement against Bashar al Assad gained momentum.

In order to protect his power Bashar-al-Assad started branding these protest groups as terrorists and foreign agents and started crushing them. The masses protesting in Damascus and other cities were disorganized and unarmed while Bashar al Assad’s army was armed to the teeth with latest weapons.  Ordinary civilians were dragged out of not only of their houses but from mosques as well and shot in the heads in full public view. When the weak and harmless women came out and raised slogans against the brutal rulers, the male soldiers dragged them by their breasts and hair. The minimum punishment for those small groups who dared simply come out on the streets and raise slogans for a change was bullet.

The wave of protest had started from Hamas, the Syrian city with a population of 2.9 million. This is that very city where in the 80s Muslim Brotherhood had dared raise voice against injustices with citizens and the dictatorial rule of Hafiz-al- Assad. The widely traveled and renowned journalist Thomas Friedman happened to be there at that time as a young reporter. He then reported that ‘President killed 60,000 inhabitants of this city and to decimate any of their relic he literally bulldozed and leveled their dwellings and township and made the site as Parks.  Perhaps it was the Arab World’s most callous and tyrannical destruction of its own people.’

The wave of protest had started from Hamas, the Syrian city with a population of 2.9 million. This is that very city where in the 80s Muslim Brotherhood had dared raise voice against injustices with citizens and the dictatorial rule of Hafiz-al- Assad. The widely traveled and renowned journalist Thomas Friedman happened to be there at that time as a young reporter. He then reported that ‘President killed 60,000 inhabitants of this city and to decimate any of their relic he literally bulldozed and leveled their dwellings and township and made the site as Parks.  Perhaps it was the Arab World’s most callous and tyrannical destruction of its own people.’

Today Hafez-al-Assad’s son is following the footsteps of his father in newer manners. He too has invited foreign journalists, sharing his views and philosophy, to impress upon them that the rebellion was emanating from these very, traditionally rebellious, cities and that rest of the country is peaceful. In order to prove this claim bullets continued to be fired at the protesters after Friday prayers every week at the main entrance of the Jamia Mosque of the capital Damascus. The citizens of Aleppo, Idlib and Darah have been branded as the survivors of the rebels of the 80’s who were mowed down and buried in the desert by Hafez-al-Asad.

Known for its chaste Arabic speaking world, Syria is not a poor or lacking in natural resources country. In spite of all this wealth, according to a report of 2013 the level of unfair distribution of these resources and opportunities was that in a country having a population of 25 million people there were only 3.7 million telephone and internet connections. Only 7% of the population owned television and 27% owned radios.

Large number of labour force lives in rural areas but the national resources are available mainly for the use of a tiny minority in cities. Literacy rate is 84% but due to the absence of political freedom civilians are not aware of their rights. Legally only one (secular) party exists. The president is elected for seven years through a referendum. Sunnis form 74%, Alawites 12%, Christians 10% and Druze  4%  of the total population.

Ruling family is Alawite that, despite being Arab themselves, holds Iran very dear to them. During the eight year long Iraq-Iran war in the 80s Syria’s ruling family had allied with Iran. Therefore today Iran is helping Bashar-al-Assad in meting out atrocities upon defenseless civilians.

United Nations’ former Secretary General Kufi Annan had despaired after his peace efforts as a special envoy to Syria in 2013. Bashar-al- Assad gave a cold response to the peace formula presented by him. Frustrated with this situation Arab League had declared that Bashar-al- Assad was only whiling away time and his intentions were dubious. Even the then Prime Minister of Iraq Nouri-al- Maliki had adopted a harsh language against Bashar-al- Assad.

Turkey’s Prime Minister Recep Tayyip Erdoğan as well had demanded Bashar al Assad to resign immediately. He even closed his Embassy in Damascus the capital of Syria. Kufi Annan’s peace formula did not include the demand for Bashar al Assad to resign though but had instead stressed upon immediate ending of the war to be monitored by UN observers. After that, with the help of a third party, both parties, i.e. Government and the rebels were proposed to negotiate in a peaceful atmosphere and relief agencies and international correspondents to be allowed to visit Syria.

In the light of political environment in the world and specially in the Arab world such a formula was invaluable for Bashar-al-Asad and not less than a life saver in every way. Despite this the murderer of humanity did not accept this formula.

Now after the destruction of Aleppo the true face of Iran that has emerged makes it obvious that it was Iran that had kept Bashar-al-Assad from accepting Kofi Annan’s formula for peace. The basis of this belief is that before the present destruction of Aleppo a ceasefire pact had been agreed upon between Syria, Russia and the rebel groups but Iran had in its last stage refused to accept it and Russian and Iranian militia started bombing those who were preparing to leave Aleppo. This shows that at any cost Iran wanted to crush peaceful Aleppo civilians along with the fighters. It did not want to leave even the smallest remnant flame alive in a region from where had flared such a powerful rebellion.

For Iran this was a golden opportunity because it was not sure that a blackmailer country like Russia will necessarily provide military cooperation in crushing civilians in future as well. Had Iran allowed Russia and Syria to implement the peace formula then Aleppo’s population of the old, children and women would not have been massacred like this.

After this destruction when the ruined and distraught civilians were leaving Aleppo, the pro-Iran Shi’a population of two villages, armed with lethal weapons and tanks, blocked their way. They did not spare even the couple and their small baby with glucose drips attached, who were trying to leave Aleppo in search of refuge somewhere in a safer area.

Charred and dismembered remains of human bodies can be seen scattered all around. There are rows after rows of ruined buildings. From the reports coming out of Aleppo it seems impossible to describe this destruction in words.

In these lines this has not been possible to take stock of all aspects of this conflict. This includes several important elements like Iran, Turkey, Russia, Saudi Arabia, Afghanistan, Taliban, Hisbullah and Daesh. InshaAllah we would talk about these aspects next week. However, before ending this piece we should read the interview to Al Arabiya’s Sharqnewspaper of Mir Mahmoud Mousavi, the brother of Iran’s former Prime Minister Mir Hossein Mousavi, in which he said, ‘Results of destruction and the havoc created and caused in Syria by Iran and its militia will be awful; and Iran will have to reap what it has sowed for itself. The killing of 300,000 people and further displacement of 12 million others in Syria will only lead to fomenting hatred against it and violence; there will be 10 million affected Syrian families living for a vengeance amid hatred. Rejoicing over the destruction of Aleppo will be short-lived but the events have put Iran’s future in great danger.’