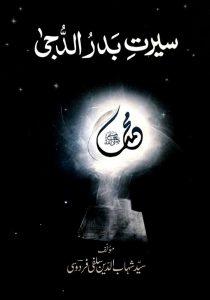 A very useful and informative book on the life of Prophet Muhammad ﷺby Sayyed Shahabuddin Salfi Firdausi, a renowned Islamic Scholar, author and Peace Activist. He is Founder and Chairman of Athar Blood Bank, Solapur and Masjid-ul-Salam, Ambedkar Nagar, Solapur.

Seerat (Urdu)/Seerah(Arabic) which means biography, nature, inner beauty, virtue and the character. Seerat-e-Muhammad ﷺ had mostly portrayed Muhammad ﷺ as a war lord by emphasizing more on the Gazwah/Sarayah (Wars) that took place during the Prophet’s time. Although Gazwah/Sarayah (Wars) were part of Prophet’s life as per the tradition and that became the need of that time but the Nature (Rahmatul-lil-Alameen), the Character (Role Model), the Virtues (Akhlaq-e-Hasna) etc. were the real and dominant part of the life of Muhammad ﷺ that gave the world a new dimension to the lives of human beings on this planet that was lacking unto that time and which unfortunately and comparatively gets lesser prominence than what it deserves in many seerat books. And most of the current seerat books can be termed as ‘Kitab-ul-Magazi’ instead of ‘Seerat-un-Nabi’.

Seerat-e-Badr-Ud-Duja authored by ‘Maulana Sayyed Shahabuddin Salfi Firdausi’ gives the insights of life of Prophet Muhammad ﷺ in the light of his character, nature, virtues which are authenticated and supported by Kutabwa Sunnah.

The writer sets the expectation right from the start for example the Preface of the book states as below,

Quote “As per Quran, Kuffar and Mushrikeen always had their belief about Deen, Imaan and faith as below,

“We found our parents doing this, and Allah has commanded us to do it.” 7:29

Teaching of Qura’n is against Muhammad ﷺ ancestor’s faith and their teaching and Muhammad ﷺ always taught to leave from ancestor’s faith completely and establish the faith after deep study and thinking in the light of Quran wa Sunnah. For the same reason human beings have been accorded the logic and the reasoning to judge right or wrong. Whatever the early writers wrote, it was their observance, understanding and experience. We have to keep this treasure as a good will as,

That was a people that have passed away. They shall reap the fruit of what they did and ye of what ye do! Of their merits there is no question in your case. 1:141” unquote.

The above preface excites us to expect some new angles about the life of Prophet Muhammad ﷺ which is quite true when you go through the pages of the book.

On page 34 under the sub-title “Wafat e Abdel Muttalib”, Writer tried to prove that it was “Zuber bin Abdel Muttalib” that took care of Prophet Muhammad ﷺ after the death of Abdel Muttalib and it wasn’t Abu Talib as stated in seerat books and in my humble opinion the writer has succeeded in achieving the same.

On page 54 under the sub-title “Hazrat Umar bin-al-Khattab ki Jaulaniyan” the writer was able to convince that the story about the acceptance of Islam by Hazrat Umar bin al Khattab was completely misinterpreted and he was a gem of a person during pre-Islamic era as well.

It was heavenly blessings after reading “Nikah e Ayesha Siddiqua” on page 75. Writer has beautifully proved the age of Hazrat Ayesha as 17 or 19 and not as 9 at the time of marriage as mentioned in seerat books.

“Hijrat e Madina” is a treat to the eyes where writer has beautifully dissect the hadith from Bukhari and proved that why Hazrat Abu Bakr has more prominence among all Muslims throughout the world and how Majoosi (Zoroastrians) and Sabaee (Sabaeans) who are enemies of Islam have tried to undermine the prominence of Hazrat Abu Bakr by fabricating the story of assassination and Hazrat Ali sleeping on the bed instead.

There are so many incidents from the life of Prophet of Islam ﷺ which were misinterpreted in general and have been clarified in this book. E.g. Mutilation of Hazrat Hamza in Gazwa-e-Uhud, Accusation of adultery on Hazrat Ayesha, Age of Hazrat Khadija at the time of marriage, Incident of “SaqeefaBanuSaa’da” etc. and so on.

Islam is ‘Deen’ not ‘Madahab’. it is a law, concept of life and way of life conveyed by prophet Muhammad ﷺ which was adopted and practiced by companions of Rasool ﷺ and people thereafter. Islam is the concept of life which requires research, efforts, hard work and endeavor. Without hard work and efforts nothing can be achieved today or tomorrow.

That man can have nothing but what he strives for; That (the fruit of) his striving will soon come in sight; 53:39-40

And this divine message can be seen in Prophet Muhammad’s ﷺ life which is a precious gem for us.

Although the information in this book belongs to the Prophets’ era but it still connects the reader in a lively manner. Author has bravely put forth some hot and debatable issues from the life of Prophet with convincing arguments. The language could be a little barrier for non-native reader but overall it has got the sequence and continuation which will transport the reader from his/her current world and take him/her in the world of Prophet of Islamﷺ.

One thought on “Seerat e Badr-ud-Duja”