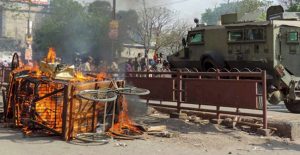 Our state is afire, save it please. This nonsense will benefit no one. There are always reasons behind any disturbance [like complaints and grievances unremedied] such as the police helped others but ignored us, the politicians visited their area but did not come to us. Or beef throwing in one locality and pork throwing in another.  All these tactics have become much tried already in the past. Why do you fall prey to these now?

Reports of [sectarian] tension are coming from several districts. Do not destroy your [peace] and harmony because of these politicians. They come and go but it is you that still be there living [with each other] in those very localities. Do come out of your homes and assemble on cross roads, [go and] knock at the doors of your neighbours to assure them and tell them that you are against sectarian hatred whatsoever.

Whether you are a Hindu or a Muslim, police cases, mosque and temple controversies will not take you anywhere. Instead your families and children will be facing police cases afterwards. You will have cases against you. In police records every household will have someone with a riot- related case, making his  life uneasy while these politicians will be enjoying their lives taking full advantage of your impulsive and  unthoughtful acts spurred by none other than they themselves.

Beware of them. Whatever harm someone has done to you, forgive him. The Government on its part has failed. Because of its failure in keeping its promise it does not have the moral courage to look into your eyes. They are unable to come to you and say, ‘See we promised you this and this and we have fulfilled it.’

They need the smoke rising from [the burning houses in] riot torn cities as an excuse to catch your votes. This may have been your house that got burnt but as a result the feathers of achievement would be flowing in the caps on their heads.

Look at the condition of your colleges. There are lakhs of students who are unable to complete their graduations. There are those who are unable to get jobs. But these politicians have been [fooling and] trapping you in Hindu versus Muslims issue. They are turning you into disruptors/rioters. Whether you are a Hindu or a Muslim, protect yourself from being turned into a rioter or a law-breaker. Take back the police cases and embrace each other to show that you love each other.

You are good citizens. You still have time to get over your anger. Shed away your anger and embrace each other. It is in fact the so-called politician who is setting fire to your houses. Where are you? Where is Bihar?  Get out of your homes and save the State. These politicians do not need an understanding and informed [and wise voter] anymore. What they want is a voter trapped in [the problems resulting from] a riot who is unable to ask them about their unfulfilled promises and depends upon them for his imaginary protection.

Translated by Urdu Media Monitor from The Wire Urdu