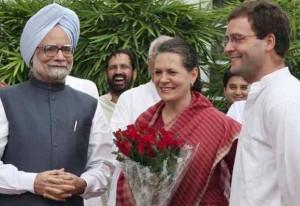 This April Fools’ Day tickled many a funny bone in Indian media. As part of its tribute to All Fools’ Day, the Bollywood-obsessed Times of India reported that the three feuding Khans, the biggest stars of the industry, are coming together in a major casting coup. Another notable one was the “scoop” by Firstpost.com claiming that Justice Markandey Katju, chairman of Press Council of India, has been appointed as head of RAW (Research and Analysis Wing). Given Justice Katju’s candor and courage to call a spade a spade, the corporate media’s love for him is understandable.

But was it the Congress’s love for Manmohan Singh or a harmless April Fools’ Day prank on the nation in suggesting he could be the party’s prime ministerial candidate in next year’s elections?

Hailing the current arrangement of Singh heading the government and Sonia Gandhi leading the party as a novel concept ahead of its time, Congress spokesperson Janardhan Dwivedi has hinted that the current power equation could continue beyond 2014: “The relationship which has existed between Sonia Gandhi as the party president and Manmohan Singh as the prime minister is something unique. This is an ideal model even for the future.”

Is he serious or is this a practical joke in the spirit of the season? I have a feeling it is the former. Dwivedi is invariably measured in the choice of his words and speaks for what Congress wallahs see as the high command.
Given the all-round mess and public disenchantment this government faces nearly two years ahead of its full term, if you think India is looking forward to another five years of Singh’s able leadership, you are either being funny or have taken leave of your senses. Verily, as the Romans believed, those whom the deities wish to destroy they first make mad.
Dynasty watcher Vinod Mehta however insists the Congress isn’t a party of lunatics. Given his vast experience and general sense of proportion, one would like to believe the veteran scribe. But then what do you make of senior Congress leader Digvijay Singh’s critique last week of the twin-power centers experiment, terming it a failure and cautioning Rahul Gandhi against repeating it if (which by the way is a big if) the party returns to power? “There should not be two power centers. Whoever is the PM must have the authority to function,” Singh emphasized. That’s interesting coming from someone who is considered close to the younger Gandhi, whom the Congress rank and file are pining to see in the driving seat.

So between Singh and Dwivedi, who is really acting as the sounding board for the Congress leadership? Is the grand ol’ party seriously considering projecting Singh as the PM once again? Of course, the dynasty cannot get a more acquiescent candidate than the honest and honorable Singh, if it’s keen to continue the present proxy power arrangement. But he will be 81 next year for crying out aloud, even if you ignore the series of disasters that have marked his second term.

Whatever his motives, Digvijay Singh is actually talking sense. This power equation has indeed been a disaster of epic proportions. Although Sonia Gandhi has been nothing but excessively courteous to the PM, he hasn’t been able to assert himself even after eight years in power.
Maybe it has something to do with his soft nature or lack of a political base. After all, Singh is the first premier who hasn’t won a single election. Or maybe it’s the inability and unwillingness of the party to tolerate anyone outside the Nehru-Gandhi clan in power that is to blame. Whatever the explanation, this “experiment” isn’t working and everyone including the Gandhis know it.

This government has been in a state of paralysis for some time now. Nothing seems to move except the tongues of Congress spokespersons who tie themselves in knots trying to explain and defend the indefensible. It’s as though the whole party and government have gone into what in computer lingo is known as “safe mode.” Thing is while you are ostensibly safe in “safe mode,” you can do little else.

The government may not be on its deathbed but it certainly is in the ICU and everyone including those in power cannot wait to see an end put to this prolonged state of uncertainty and sickness. Not surprisingly, the Congress rank and file are convinced that only Rahul Gandhi can cure the government and the party.

So why is the Congress then speaking in so many tongues? Is there a method in the madness, as Vinod Mehta seems to suggest? Or is the largest political party on the planet simply driven by a death wish? Whatever the reason, by sending out such mixed signals the Congress leadership is only sowing confusion in the minds of its own rank and file and the nation of a billion people. How can a party so confused and uncertain of itself face the impending battle against a formidable enemy?
The shake-up in the Bharatiya Janata Party this week and the ascent of Narendra Modi to the central parliamentary board and central election committee has all but hit the bugle for the 2014 battle, boosting his much touted candidature for the top job. Modi is the only chief minister to be thus tellingly elevated to the two decision-making bodies defying elders like Advani who plumped for Madhya Pradesh chief minister Shivraj Singh Chauhan.

Gujarat’s tainted chief minister also forced the party chief Rajnath Singh to pick his former Home Minister Amit Shah, the key accused in the killing of Sohrabuddin Sheikh and his wife, as the general secretary.
The BJP has also elevated Varun Gandhi, Rahul’s estranged cousin who hit the headlines some years back with his expression of sweetness and light directed at Muslims, and Uma Bharati, one of the key players in the Babri Masjid saga. The party has stopped short of declaring the architect of the 2002 Gujarat pogrom as its candidate for the top job, for fear of scaring away allies like Nitesh Kumar.

This suggests the shape of things to come as the BJP resurrects its hard-core Hindutva agenda. Things could get really exciting in times ahead for the nation in general and minorities in particular. Does a listless and confused Congress have in it to face this gathering storm? I wouldn’t think so. There may still be a fighting chance to confront the specter if the reluctant “Prince” resolves his Hamletian dilemmas soon and reach out to the party’s original constituency of the sensible and secular majority and disadvantaged communities. I am no fan of the dynasty but with his singular reluctance for power and office, Rahul does offer a refreshing contrast at a time when people are ready to sell themselves and kill for power.

Even then a bruised and battered Congress or the BJP for that matter is in no position to fight the final battle and win power on their own. There’s little hope for the Congress unless it is offered a helping hand by secular regional parties and the Left. Or it could be the other way round as had been the case with Deve Gowda and I.K. Gujral. It looks like an absurd impossibility right now. But then as Otto von Bismarck suggested politics is the art of the possible.