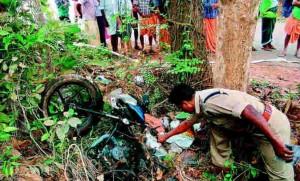 An incident has occurred but electronic media has unnoticed it. For how long can anyone run away from facts? Slowly and gradually the news has become  common knowledge. In print media in north India Qaumi Salamati was the only newspaper to carry this news on its first page with a banner headline.

The news was from Kerala where a man was killed when the explosives he was carrying for bomb manufacturing exploded prematurely. According to reports in District Kunnur of Kerala two persons were carrying potassium nitrate and 3kg explosives. Some believe that these explosives were to be planted in a Muslim locality while others think that this was meant for RSS’s office where it was to be properly assembled into a bomb.

The place this explosive material was meant for is not so important. What is important is that it exploded on its way causing serious injuries to two persons and destroying the motorcycle they were riding. The dead man is named as Dileep Kumar who was an active member of RSS.  The local police has tried to extenuate the seriousness of the incident by saying that the man was a BJP supporter and an expert in making firecrackers. However when local Muslims tried to reach to the depth of the issue they found out that the deceased was a RSS activists and not a BJP supporter. This news gives strength to reports that bomb making is actively being carried out all over the country and that RSS members are involved in it. Whether they have instructions to do so or are doing it on their own does not lessen the gravity of the issue. In a statement the Home Minister had recently said that RSS members were involved in terrorist activities. This infuriated RSS and BJP members and in their protests they paralysed the parliament. To use pressure tactics to have things done its way and in its mastery in hiding facts BJP has no parallel. However,  Mr Shinde had to backtrack on his statement and he did it with the same spirit of making political gains with which he had made these revelations.

The death of RSS worker in Kerala is a live proof of the lies and falsehood used by them to prove their piety and love for peace. Most interesting aspect of this story is that Hindi print media and news channels have blacked out this news as if Kerala is not part of India or nothing has happened at all. The fact is that explosion did take place and a man was killed in it. This should not be easy for anyone to guess how many more deaths would have taken place if these explosives had reached to the places they were intended for. On the contrary if a Muslim was killed in this incident this would have given news channels enough material to keep shouting  all day and they would have spent next three days in trying to find out its links. No one is saying that all the Muslims in this country are innocent and that RSS is solely responsible for whatever is happening. This event simply shows that terrorism has nothing to do with religion. If some Muslim youths have gone astray and have become extremists, some Hindu youths are also involved in extremist activities. RSS and BJP should admit this fact. Similarly media will have to change its conduct and practice. Although media wants to be known and acknowledged as impartial, objective, liberal and progressive, it is actively involved in tarnishing the image of Muslim youths. If Press Council Chairman Justice Katju has accused media of partiality what is wrong in it? Instead of making faces and raising eye brows and interpreting Justice Katju’s realism as his favouritism for Muslims, media should assess its role.  It should dig out the facts behind Kerala incident. Similarly NIA should also perform its duty in unearthing the truth so that Home Minister does not have to offer apologies and backtrack on his statement.