On Sheila Dikshit’s orders Haroon Yusuf returns the Waqf Board driver. When will Delhi Government Minister return Rs 16 lakh belonging to orphans and widows? Why did the Chairman and CEO not take any steps to stop embezzlement in Waqf Board?

Published in Qaumi Salamati on 24 April 2013

New Delhi: (QS Bureau) Revelations by the Qaumi Salamati’s media team about embezzlement in Delhi Waqf Board (WB) and the use of WB’s driver by Delhi Government Minister Yusuf Haroon has stunned everyone. This criminal act has been widely condemned and Qaumi Salamati has received several calls in this regard. Sources say that Chief Minister Sheila Dikshit was shocked and enraged at the revelations of the misdeeds of her minister. Despite being unwell she instructed the minister to send back the driver to WB. Sources in WB say that driver Rafiq has returned to WB to discharge his responsibilities. He has served Haroon Yusuf illegally for nine years but was paid by the WB. Obviously the guilt is not of the poor driver. This is about the audacity of Delhi Government Minister Yusuf Haroon who was using the money belonging to orphans and widows for his personal needs. Qaumi Salamati’s report has provoked wide condemnation of the minister and in view of the coming elections Chief Minister has taken serious notice of the misconduct of her minister. Talking to Qaumi Salamati, driver Rafiq said, ‘My conscience was not satisfied with working for Hroon Yusuf and getting paid by the WB. But without the permission of the Minister what could I do? I feel relieved at restarting my service to the WB.’ From this statement readers can judge from the veracity of our report. 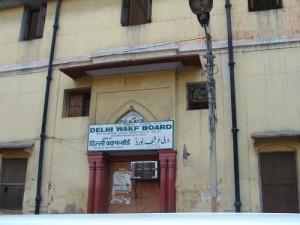 It has been nine years since Haroon Yusuf relieved his responsibilities as a WB Chairman. Why then has he been using WB driver? Will he return to WB the money paid to the driver during this period and demonstrate some milli ghairat [communal honour]? According to an estimate total money paid to the driver during this period comes to 16 lakh. Will the Minister return this sizeable amount belonging to widows and orphans that he has spent for his personal use? During the coming elections will he not be asked by the voters about this unfair act. Does he not have any fear of God and being answerable for this? In the past there have been some WB chairmen who have avoided even taking a cup of tea there. But how has Haroon Yusuf been able to muster the courage to usurp what belonged to widows and orphans? Qaumi Salamati’s readers would want to know the answers to these questions. Qaumi Salamati’s mission is to work against injustices and corruption and show a mirror to the thekedars of millat and we will therefore continue to do so. But the question is why did the present WB Chairman and CEO not fulfil his responsibilities and take any steps against this embezzlement?

Malpractices in the Waqf Board during the five year tenure of Haroon Yusuf come to light Allotted Waqf Board’s land in Ram Ghat to DTC as free; Return of the driver’s pay demanded

New Delhi, 23 April : Malpractices committed by the Power Minister Haroon Yusuf during his tenure of office are coming to light by the passage of every day. Even after completing his term of office as the Chairman of Waqf Board (WB) he kept the driver of the WB for his personal use. Since this coming to light  strong sentiments have been shown by the public. People say that during the period when he was the chairman, WB went through the worst and most corrupt period and that is still going on because the present chairman is also treading the same path.

Expressing his strong displeasure the President of All India Imam Association Maulana Mohammad Sajid Rasheedi said, ‘it is a tragedy that all the chairmen who came to power looted the Waqf Board and rendered unforgettable services that became the cause of the decline of the Board. During his five year term of Office the WB’s Chairman Haroon Yusuf never convened any meeting of the WB. During those years of course he did show one act of energy and that was the allotment of hundreds Bigahs of land of the WB in Ram Ghat to the Delhi Transport Corporation for free. These so called Muslim ministers are not representing Muslims but in reality are serving the cause of securing the future of their progenies while they are themselves in the government.

The chairman of the Protection of the Auqaf Committee, Mumtaz Chaoa said, ‘it is highly regrettable that a driver by the name of Rafiq is still serving Haroon Yusuf and is being paid by the WB. It is the height of negligence that the chairman Chaudhry Mateen Ahmad has become the silent spectator and is thus committing the sin himself. Any money in the custody of the WB is in fact the property of the poor and not of these rich people. Haroon Yusuf should immediately return this money and something more back to the WB so that it could better the lot of the poor to some extent. Carelessness of these affairs by the Chairman is intolerable. What belongs to the poor he is gerrymandering to the ministers. Naveed Yar Khan said, ‘It is the carelessness of WB’s chairman that the driver is being paid by the WB. Haroon Yusuf should return the total amount to the Board. Waqf Board’s income originates from the landed property and that income is not meant for someone’s personal use and is purely for the maintenance of mosques, graveyards, eidgahs and the benefit of the poor. How did the conscience of Haroon Yusuf allow him to get his driver paid by the Waqf Board.’

On condition of anonymity a man said that during the tenure of office of Haroon Yusuf there had been tremendous malpractices that cannot be ignored. There used to be a man posted in the WB solely to handle the correspondence who used to dispatch and receive the post but in place of that man he got a letter box installed. This resulted in the mail being piled up in heaps only to be looked into when thought necessary and shredded if appeared unnecessary and thrown into the bin; no effort was made to read the mail. There are scores of such examples. Up till now the present Chairman Chaudhry Mateen is following the tradition set by Haroon Yusuf.

According to the sources it has come to light that since Haroon Yusuf predecessor Siraj Pracha had an official car he did not use WB’s car.  After taking over WB’s Chairman Haroon Yusuf gave the white Ambassador in the services of his sister. Therefore it is also to be investigated whether that car has come back to the WB or not. And if not, then Haroon Yusuf needs to be charged not only Rupees 16 Lakhs but something more.’