Four officers who were suspended for being negligent towards their duties during Faizabad riots are reinstated; Three of those belong to Yadav cast; they were accused of not only running away from the scene but also switching off their phones thus giving miscreants a free hand. The public asks: If they are all “innocent” then who is the guilty?’

Is this not a crime?

When the rioting mobs started burning shops those officers posted at the site did not try to control them but fled from the scene. The state government had then also acknowledged the irresponsible behaviour of those officers in not controlling the rioters and that is why they were suspended. Why is it then that without any inquiry report being received, now they have become innocent and free of any wrongdoing?

Lucknow: Four of the officers who were suspended by the Samajwadi

government for being negligent towards their professional duties and displaying irresponsible behaviour during last October’s riots in Faizabad, have now after seven months been reinstated by the very government. The government has thus given a message to the public that by running away from the scene and by letting the rioters burn shops, these officers had not committed anything wrong. Three of these four reinstated officers belong to Yadav cast and this may be the reason why the government is especially lenient towards them. People all around are now asking that if the administration and the police are not responsible for the riot then who else could have been responsible for encouraging the rioters? It should be noted that according to a directive issued by the government if anywhere a riot breaks out, the local officers in that area will be held accountable for that. But in this case the government has disregarded the rule that it has itself made. 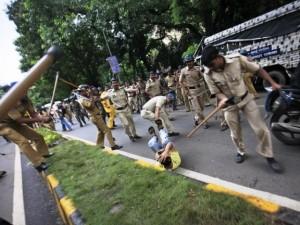 and rioting took place in Faizabad’s Chowk area, Ramji Yadav was posted there as SP City, Bhallan Yadav as Inspector Kotwali, Tilak Dhari Yadav as City Magistrate and Shrikant Mishra as District Magistrate. These officers bore the responsibility of maintaining law and order in the area of their posting.

More than 100 shops and commercial centres were torched and destroyed during the riot. For more than three hours Faizabad continued to witness rioting and all these four officers, who had been posted to maintain law and order, turned blind eyes to these incidents and ran away from the area that gave the rioters a free hand. The riot that had started in Faizabad spread to adjoining areas of Bhadarsa and Radoli that also claimed the lives of two persons.

At the time when riot started in Faizabad the then District Magistrate Deepak Sharma and SSP Ramat Sharma were in Radoli town of the district because riot had started there as well. In the absence of these two senior officers when the rioters started torching the shops in Faizabad’s Chowk area, the aforementioned officers posted there did not try to control the mob. They fled from the scene instead. The state government had then admitted the irresponsible behaviour of the officers for not trying to control the mob. The then Director General of Police A C Sharma, ADG intelligence O P Malik and IG Zone Subhash Chandra had, the very next day, in clear words admitted that they had ordered local officers to disperse the rioters by using water cannons, tear gas and rubber bullets but they did not heed these orders and switched off their mobile phones. It was not only the local residents who saw the inaction and irresponsible behaviour of the officers in question but some of the social activists and Samajwadi Party’s leaders also witnessed it with their own eyes.

Because of their irresponsible behaviour the government had immediately suspended them. However, now seven months on, state government has reinstated them and has, thus, given the impression that these violators of their professional duties are innocent. Residents of Faizabad have been asking if in the eyes of state government these officers were not responsible for being negligent towards their duties, who were the people who had encouraged these wicked elements because of whom hundreds of shops were burnt to ashes in Faizabad.