India’s greatest strength is its democracy. If the country has been on the 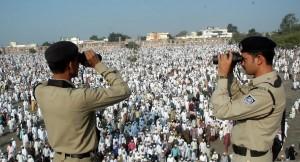 march of progress in the face of a million mutinies and boasts stability and functioning institutions, it is chiefly because of its vibrant democracy. If the idea of India has worked defying its mind-boggling religious, linguistic and cultural diversity, you know where the credit belongs.

Maybe it has something to do with the fact that while Pakistan lost its architects soon after its birth and paid a heavy price for it, India has had the opportunity to be shaped in its formative years by the first line of leadership that had steered the freedom struggle. Whatever the explanation, India’s worst detractors would concede that it is thanks to the blessings of a democratic polity that the nation’s ship sailed through savage seas and storms to safety.

And now this democracy is under attack from a creeping police state and the same fascist mindset that proved the undoing of Europe in the last century. Increasingly, you see events and trends that challenge the idea of a democratic and plural India. Something has gone terribly wrong somewhere. Things fall apart and the centre cannot hold, in the words of Yeats. Every passing day adds to question marks hanging over the state of the nation and future of its vulnerable groups and communities.

The death of Khalid Mujahid on May 18 in police custody may look like just another tragedy that happens routinely in the length and breadth of the great republic. It was anything but routine. The cold-blooded fashion in which Mujahid was eliminated by the Uttar Pradesh police after six years in detention has an already insecure community totally shaken.

Mujahid wasn’t a typical terror suspect. Both Mujahid and Tariq Qasimi, who was picked up with him as executors of the 2007 serial blasts in UP, were religious scholars and went by the honorific of Maulana. The case against the two had fallen apart after the Justice Nimesh Commission gave them a clean chit and confirmed the complicity of top cops in framing the duo who had graduated from Darul Uloom Deoband, Asia’s most respected Islamic university.

Of course, Mujahid isn’t the first young Muslim to die in detention and this reign of state terror is unlikely to end with his death. Last year, another innocent man, Qateel Siddiqui, was killed in Pune’s high security prison a day before he was to be moved to Delhi.

From Ishrat Jahan to Maulana Mujahid, there’s a long list of the usual suspects ending up dead in detention or in staged police encounters. There have been others like the Mumbai lawyer Shahid Azmi, another defender of the indefensible, whose killing remains a permanent mystery.

If Ishrat, her three friends, Sohrabuddin Sheikh and his wife were killed in Modi’s Vibrant Gujarat, Mujahid met his fate on the watch of the secular Samajwadi government. It is the same government that recently bent over backwards to bail out Varun Gandhi in the infamous hate speech case.

As many as 88 witnesses, including journalists and officials, were silenced to kill the case against Nehru’s great-grandson, who vowed to chop off the Katuwas’ (a derogatory word for Muslims) hands and heads. He has been made general secretary of the Bharatiya Janata Party, which hopes to replace the Congress in power in next year’s elections.

This killing has reinforced the Muslims’ fears that they are facing a calibrated terror campaign at the hands of police and security-intelligence establishment. Like the military industrial complex in the US, it has become so powerful that it is its own master and calls the shots no matter who is in power.

Perhaps because of the violent separation of India and Pakistan along religious lines and collective historical baggage that preceded it, the security establishment has come to view the Muslims as the problem – the fifth column of the enemy and often the enemy himself.

So whether it is the grand old Congress, Muslim-bashing BJP, socialist pretender SP or champion of the oppressed Bahujan Samajwadi Party in power, there’s little change in the policies, attitudes and actions of the security establishment or the Deep State as the Turks would call it.

The cancer of communalism has spread so far and wide that no section of society – from the police to the administration, to the media to universities – appears to be exempt. Every time a bomb goes off somewhere – now you do not even need an explosion or excuse – the nearest Muslim must be put away as the perpetrator.

The recent National Crime Bureau statistics speak for themselves. While Muslims, according to 2011 census, are just 13.5 percent of the population, their share in the country’s prisons is nearly 25pc. Every third prisoner in Maharashtra and every fourth one in UP and West Bengal is a Muslim. In Gujarat, it is 23 percent prisoners against less than 10 percent of the population.

As for Muslim representation in police and security forces, it’s less than two percent. It’s the same story in elite civil services as well as lower administration. Is it any wonder then that India’s largest minority feels perpetually persecuted and under siege?

Former inspector general of UP police SR Darapuri, who has among others set up Rihai Manch for the release of innocent Muslims, talks of thousands languishing in secret prisons across the country. “Khalid Mujahid is not the only one (to be victimised), there are many Muslim youth who have been missing from their districts and even their families do not know about them. They are kept in secret detention to implicate them in a bomb blast some time in future,” he said at a press conference this week.

Journalist Ashish Khetan, who has extensively reported on Gujarat and done path-breaking stories on false terror cases and targeting of Muslims, attributes the problem to “a dangerous prejudice pervading India’s criminal justice system” and security establishment.

The killing of Khalid Mujahid marks a new low and a turning point in this relentless war on rights. A terrorised minority is the target of state terror. The cases of Ishrat, Shaikh, Maulana Naseeruddin and others reveal that every such frame-up involves several states.

If a Qateel Siddiqui is picked up in Delhi, he is immediately implicated in attacks in the distant Mumbai, Pune, Bangalore and every other case that the collective memory of security agencies could summon up. The condemned spend years, as Mohammed Aamir did, hopelessly fighting multiple and endless cases across the country.

Where will all this end? Home Minister Shinde has talked of special courts to deal swiftly with such cases probably with an eye on 2014. But courts alone cannot sort out this issue. Sickness lies elsewhere. And it’s not the problem of a community struggling on the margins of society. This creeping police state has emerged as the greatest threat to the idea of India.

If a community as large as nearly 200 million is endlessly targeted and driven to the edge, India itself will not remain unaffected by the chaos. The secular and plural character of the polity and the rule of law that goes with it is not merely the need of Muslims; it’s the lifeblood of constitution and body-politic. It is the glue that has held together this great, complex melange of a nation. Do not let an extremist fringe kill the idea of India in the name of security.

English version was published in The News

The writer is a commentator on Middle East and South Asian affairs.