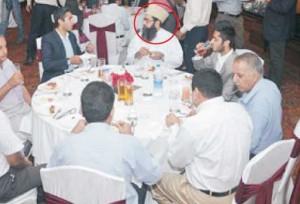 last Friday of Ramadhan) when on the one hand the major Muslim Community was observing Yaum-ul-Quds (World Quds Day) by taking our mass rallies to demonstrate against the Israeli brutalities against the Palestinians, a band of renegade and so-called Muslim leaders were having a sumptuous Iftar Dinner at the Islaeli Embassy in Delhi on the other, to show solidarity with the Zionist Regime.

Along with the bearded and religiously robed there were some liberal 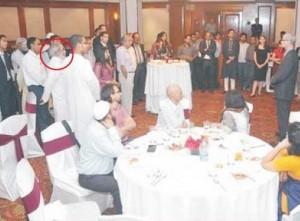 Muslims too who attended this dinner. According to the information provided by the Israeli Embassy’s website sixty Muslim Life Members of the Embassy were among those who attended the Iftar Party hosted by the Embassy. The press release issued by the Embassy did not name those Muslim leaders and scholars who attended the dinner. The photograph however, clearly shows the owner publisher of many daily newspapers Mr S M Asif also seated among the guests. When later contacted and asked whether he had attended the Iftar Party at the Israeli embassy, he denied it but when further questioned that if he did not attend the dinner then why has the embassy published a photograph that shows him there among the other guests? At this instead answering the question he put the phone down.

Maulana Umair Ilyasi, who is the leader of a delegation of Delhi Mosques Imams that has toured Israel, did not answer the question in any clear terms about participating in the Israeli Iftar dinner but simply said that he does not have any knowledge of it. The photograph which the Israeli Embassy has published on its website shows the faces very clearly. It was on this basis that the Daily Qaumi Salamti had contacted him to find out the facts because Maulana Saheb has toured Israel and has opened his mouth in favour of Israel many a times. It should be kept in mind that Maulana Umair Ilyasi is the President of All India Imams of Mosques Organisation and therefore claims to be the leader of all the mosque imams of India. If so, does he support any such un-Islamic activities of the imams?

According to the website, the Israeli ambassador addressing the dinner wished better relations between Muslims and Israel and told the gathering that Muslims and Israelis are the progeny of one and the Great father Ebrahim. He said that Ramadhan is not a festival only of Muslims but is the festival of the whole world. Very audaciously he claimed that there are 12 per cent Muslims in Israel who enjoy all kind of liberties there. It was highly surprising that when the ambassador was making this claim no one among the guests stood up and dared remind him the atrocities being committed against the Palestinians.

It should be noted that on the occasion of Yaum-ul-Quds, Muslims all over the world record their protest before the world against the illegal occupation of Palestine and the atrocities committed by the Israelis there. Brutalities committed by Israeli government are there before the world. Palestinians are gagged up and Gaza strip has been under unlawful siege for the last so many years that has caused shortages of food and medical facilities and therefore many children die unnecessarily every day. Due to illegal constructions by the Israelis, Palestinians are being deprived of their own land. Despite these continuous atrocities world’s conscience is not there to be seen or felt. Nothing is being done against the brutalities of which the Palestinians are being subjected to except lip service and issuing occasional statements of condemnation. This is why that on the last Friday of Ramadhan every year Yaum-i-Quds (World Quds Day) is organised and rallies are taken out to awaken the conscience of the world to the atrocities committed by Israel.