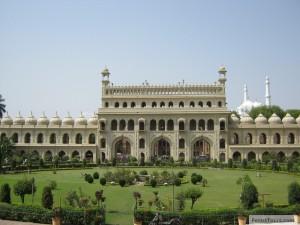 It was not very long ago that a Sunni scholar used to lead prayers in the
Ghufran Maa’b mosque and Shi’as and Sunnis used to offer prayers behind him. Reading the books that were written about Lucknow we learn that congregations led by Firangi Mahali scholars were also joined by the members of Shi’a community and no one could differentiate between a Sunni and a Shi’a. There was complete amity between the two sects. Not only this, the first ever congregation led by Ghufran Maa’b on 27 Rajab 1200 Hijrah, i.e. 28 May 1786, was joined in by all of the Firangi Mahli scholars and large number of Sunnis.

What I mean by this is that only about 200 or 250 years ago in Lucknow there lived people known as Muslims. They had only one identity and shared one culture. Lucknow was known far and wide for this uniqueness. This city had a special place in the hearts of the people. People of all kinds of identities used to enrich its culture by participating in socio-religious gatherings and festivities.

But in the span of these 200-250 years a strange thing has taken place in this city: Muslims have ceased to exist here. Visit some localities and ask someone, ‘Brother, are you a Muslim?’ Annoyed by the question he would retort, ‘Do I look like a Muslim to you? Don’t you ever call me a Muslim? I am a Shia Isna Ashri.’

‘All right, brother. Can you please direct me to a mosque, I want to offer my prayers.’ That person will then ask you about your sect. If you are a Sunni, he will tell you the address of some Sunni Mosque in a Sunni locality but will not tell you about the one that is nearest. And you will witness a similar attitude among Sunnis. Thus our mosques have been divided into Shi’a and Sunni mosques.

Once I was in Iltifat Ganj in Tanda, Faizabad, and was looking for a mosque to offer my Friday prayers. As for myself I do not care which sect the mosque belongs to. I pray in any mosque and behind any imam. There I saw a group of young lads nicely attired and wearing caps talking among themselves. ‘Children, can you guide me to the nearest mosque? I have to offer prayers.’ I asked. ‘The one in front is a Wahabi Mosque. Don’t go there. And that minaret at some distance is of a Sunni Mosque. At some distance from there is a Shi’a Mosque, a scholar from Faizabad comes there to lead prayers.’ one of the boys promptly answered.  As I remember all this happened some 25 years ago. Puzzled and bewildered I listened to them and wondered , ‘How dangerous is the future of the community!’ I said to myself.

Muslims are in a state of confusion and turmoil all over the world. But unmindful of the consequences we are fighting among ourselves with keeping our eyes shut. This situation is neither letting us do anything positive, nor this predicament making us able to achieve anything. Whatever is happening here  in Lucknow is making the whole Muslim community embarrassed  but those who live here are not ashamed at all, they have become devoid of any sense of shame. The simple reason of this is that now they are Shi’as or Sunnis only but not Muslims. If they were Muslims they would not have forgotten the message of our beloved Prophet (PBUH) who, after his last Hajj, gathered the Muslims at a particular place and told them that all Muslims were brothers in faith. He abolished the differences on the basis of skin colour and emphasised that no one was superior or inferior to the other except in matters of God-fearing. Whatever happened to this teaching of the Prophet (PBUH)? The Shi’as and Sunnis of Lucknow beware! You are inviting the wrath of Allah. You have become like the people of Noah and are not following the right path.

I am embarrassed and anguished. It is because of this that I am forced to write such harsh words that would not be written otherwise. The more I think the more I feel that Shi’as and Sunnis of Lucknow should not be recognised as Muslims because the character they are displaying is not the character of Muslims. The limit has reached to the point that when a Shi’a dies Sunnis feel happy and Shi’as rejoice the death of a Sunni. I am therefore not prepared to acknowledge the likes of Shi’as and Sunnis of Lucknow as Muslims.

The fire that has been ignited in Lucknow is becoming uncontrollable. Khateebs with little and fallacious knowledge have successfully spread their dirty thinking among the ordinary folks. The new generation has been fed upon this hatred. You are only reaping what you have sown. If you do not come to your senses life will become unbearable. Use the intelligence the Almighty has blessed you with. Our maulvies of today have become professionals, they have their own selfish interest and have no concern for you.

O’ my brothers from Lucknow! The news originating from Lucknow makes us hang our heads in shame lest the next door neighbour asks, ‘Why you guys are always fighting among yourselves?’

O’ my brethren! If you want to live with respect and dignity, unite like the Muslims of Badar otherwise you will be butchered like sheep as is happening in rest of the world. I apologise for the harshness of my tone and with due respect I beg to say to you:

(What is oozing out of the wounds of both communities; watch carefully lest it is the blood of Islam)