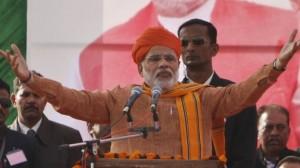 Citing Article 370 as the main cause of corruption and miss governance in Jammu and Kashmir, Modi said that the laws promulgated by the Central Government to stump out corruption were not incorporated in the State because of the Article 370 that gave special status to the State. And it was due to this special position that gave rise to the separatist movement within the State. Chief Minister Umar Abdullah bitterly criticised Modi’s views about Article 370 and called him mentally a disturbed man. He challenged him by saying that he would never be able to alter ormodify the benefits of Article 370 or abolish it.

PDP chief Mufti Mohammad Saeed criticising Modi’s demand said that even the Parliament has no powers to abrogate Article 370 of the Constitution. According to Mufti Saeed’s point of view Special Status of Jammu and Kashmir having been endorsed by the State Assembly has become a permanent feature. Even when the geographical boundaries of the country are to be determined the State of Jammu and Kashmir can only be a part of it by virtue of Article 370 and if this bridge is demolished then the annexation of State with the country and other matters will become meaningless. To abolish Article 370 and ending the special status of the State of Jammu and Kashmir has been a demand of Bharatya Janata Party from day one and that has not been a hidden agenda. This party remained quiet and did not try to meddle with this Article whenever it was in power in the centre. Instead, it is the Congress that has tried to meddle with it. In 1964 Ghulam Muhammad Sadiq (late) was posted here as the chief minister instead of as prime minister. In 1975 Sheikh Muhammad Abdullah by accepting this position confirmed it. Later TADA had also been promulgated; POTA was also imposed and then after declaring many parts of the State as disturbed, the Disturbed Act was imposed; and by giving special powers to the army and forces AFSPA was imposed. Non-residents of the State were given certificates as ancestral citizens. Outsider individuals and organisations were allowed to buy or lease land and property. Who did all this? It was done by the ruling political party or the leader of the opposition party who had held a high position at the time when these different acts were being promulgated in the centre. Now today when Narendar Modi is demanding first to initiate discussions before abolishing Article 370 then why are these political parties who have now and then played a great part in making the usefulness of this Article ineffective getting upset. Who were the ones who made TADA and POTA effective in the State?  Upon whose recommendations Disturbed Act and AFSPA were imposed in the State and it were these laws under that a policy of coercion and oppression against the people of the State was practiced and all the limits were crossed. These politicians should first do a little their own heart searching before criticising and raising hue and cry upon the suggestion by Modi and also try to find out how much justice they have done with the people of the State under this Article during their rule?

Modi has only advised for something. It is not necessary it should be acted upon this advice. Narendra Modi is the same chief minister of Gujarat under whose rule minorities were slaughtered while he kept watching it the same way as the last Prime Minister Narasimha Rao had enjoyed the scene of the demolition of the Babri Mosque at the hands of Bhajpa perpetrators and had kept his cool.

Seriously thinking all the political parties are one and the same.