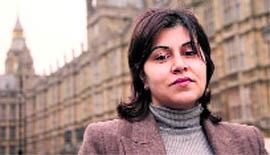 If Sayeeda Warsi’s becoming a Member of Parliament and later appointment as Britain’s Senior Foreign Office Minister was a happy event of history, then her resignation in protest against Britain’s policies on Palestine is not only a pleasing event but is also such a courageous act that should embarrass and put to shame those Muslim states and their heads who have either buried their heads, like an ostrich in the sand or have adopted complete silence or have been issuing feeble statements and have been making futile efforts to be counted among those who have some sense of self-dignity and self-respect.

While expressing her anger in clear and unambiguous language Sayeeda Warsi did not consider that she was the only Muslim to become a cabinet minister in a British Government—indeed an honour for her and also the result of David Cameron’s favour. [She did not think that] If she had kept away from the politics of protests and continued her loyalty then she could have even bigger honours and designations in future. She did not care about these things. Instead she has tried to expose the hypocrisy of those whose ancestors were proverbially known as the ones in whose empire the sun did never set. Not setting down of the sun was hyperbole but the new sun that has arisen because of Sayeeda Warsi’s resignation has stunned David Cameron and his colleagues as well.

As the news of her resignation has spread all around the world in no time, we are sure that everywhere where there are people, elites or the commoners, who feel and share the pain of Palestinians, tributes would have been paid to Sayeeda Warsi for the courage she has displayed that has not been demonstrated by anyone anywhere in the world holding similar honours be they ministers or the elites. Governments and families with big businesses everywhere remained tight lipped during this time. Those who usually remain at the forefront of human rights campaigns and those who oppose wars and preach peace kept quiet. Public at large in such countries, however felt the pain, got shaken and came out on streets against the worst atrocities being committed in Gaza but the Governments behaved as dead.

Sayeeda Warsi’s resignation should also be seen against this background that whether it is US, Britain or European Union, everywhere Israeli Government has spread its net trapping all the big fish. As a result any voices raised against Israel are stopped then and there from being heard or full arrangements are put in place to counter them. When American senator Chuck Hagel gave a statement that ‘the Israeli lobby intimidates American Congress and has committed some follies’ life was made difficult for him for many years.

Not only America but in many countries Israelis or Israeli lobbies are so strong that these countries are scared of opposing or criticizing Israel. From this point of Sayeeda Warsi’s courage is praise worthy.

One thought on “Sayeeda Warsi’s Resignation”