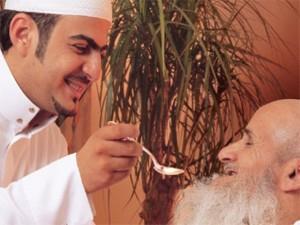 abode. May Allah bless her soul with a high pedestal in Paradise, amen. Later during condolence sessions it came to light that her son is highly technically qualified and worked in the Gulf at half a million Rupees monthly salary. As mother began falling frequently ill he requested his wife to shift to New Delhi, permanently stay with mother and serve her. The good wife happily agreed and shifted base to the Indian capital. In due course, as mother began remaining regularly unwell, the son quit his lucrative job in the Gulf, took up a not so good position in the national capital region and both of them started living full time with mother. He noticed that due to her aching knees mother was not able to climb up while she liked to sit in the sun on the roof. He carved out space in a corner of the house and got an elevator installed. Lo & behold, even in the 21st century there are some persons in the world who discern God’s real purpose behind creating the humanity and act thereupon. One feels like envying the parental upbringing of this young couple. The boy and his wife were actually implementing God’s command in letter and spirit: In the best way possible do good to your parents and the relatives (holy Quran 4.36). Even Dr Sir Mohammad Iqbal was amazed at such high level of parental upbringing:

Was it the school lesson or parental upbringing that taught Ismail (Ishmael) what should he happily forbear for the sake of his parents’ pleasure ?

While the significance of serving the parents is generally well known let’s try to understand what God has enjoined upon us in respect of our relatives. In order to describe the relatives God has used two types of terms in the Quran: Arhaam and Aqraboon or other derivatives of the 3-letter Arabic root QRB like Qurba, Aqrabeen, Maqraba. Arhaam is plural of Rahm that’s the chamber in the mother’s sacrosanct body in which the human being gestates. But as a collective noun, Arhaam has been used in Quran Kareem to describe one’s extended family comprising all the relatives both through birth and matrimony. As per divine instruction each one of us has to continuously and duly discharge the obligations of kinship (4.1). Maulana Abdul Majid Daryabadi writes in Tafseer-e-Majidi that according to the divine law (Shari’at) the kinship group is the basic unit of society. Prophetic tradition says that, hanging from the celestial throne, the womb supplicates God to ‘bless those who augment me and censure those who frustrate my centrifugal aspirations’. Quranic commentators mutually agree that patronizing the relatives is a fundamental obligation of faith (Wajib) and to deliberately disregard them is sacrilegious. For this, the individual is under continuous divine surveillance. The Prophet (S) also exhorted that even if the other fellow tries to sabotage the relationship bond, one should still stick on unilaterally. He declared: Whosoever wishes augmentation of provisions and elongation of life period must indulge in obliging and appeasing the relatives (Sila-Rahmi).

Abu Huraira (R) complained, ‘I try to strengthen the bonding while some of the relatives frustrate my efforts’; the Prophet (S) informed him that till he does that an angel would remain deployed by his side. God further desires (26.214) us to keep reminding the society about such injunctions of Shari’at. Also, He cautions us that the relatives deserve our attention on priority vis a vis the other members of the society (33.6). According to Tafhim-ul-Quran any act of charity done ignoring and superseding the needy relatives doesn’t squarely measure up to the divine reckoning. There is a special mention in the Book regarding helping the relatives who are orphan (Yateeman za maqraba – 90.15) that commands greater reward. We are forewarned (47.22) that our going against these heavenly writs may tantamount to twisting the basic infrastructure leading to societal upheaval; God detests and deprecates such assailants of His design. Tafhim-ul-Quran says that this verse enlists Qata-Rahmi (cutting off a natural relationship) among the fundamental prohibitions (Haraam). Conversely, Sila-Rahmi has been bracketed (2.177, 4.36) among the best deeds (A’maal-e-Saaleh).

According to the commentators all the relatives – distant & close – of an individual constitute what is known as Zawil Arhaam. For special consideration of this group God has used (42.23) the term Al-mawaddata Fil-Qurba. Closer the relationship more intense is the obligation and bigger is the sin for pausing or laying off the relationship. As per divine scheme Zawil Arhaam has been made internally self-sufficient. In a kaleidoscope, turning around the cylinder in a circular motion shows different designs and colour combinations. Similar is the internal mechanism of Zawil Arhaam: in the group of relatives some are very rich, some very poor, some on the threshold, some very learned, some illiterate, but the group as a whole is internally self-reliant. God keeps a tab on every group member as to his/her behavior with others. God’s minimum expectation from us under Sila-Rahmi is to ‘not avoid what best one is capable of doing’ for the fellow group members. In two verses of Quran Karim (17.26 & 30.38) Sila-Rahmi has been declared as the right of the needy relatives in the assets & capabilities of the better off members of Zawil Arhaam. Mind you, God may sometimes even turn around the kaleidoscope of Zawil Arhaam and thereafter the red color may begin looking white .. and the white, pink etc. Qata-Rahmi is ill-treatment with the relatives or deliberately not doing what best one is capable of doing with the relatives. In 17.26 God enjoins upon us not to be spend-thrift and squander away our wealth & income and, instead, discharge the obligations of the needy relatives.

Simultaneously, God has also put a caveat (60.3) that even in order to favor the relatives nothing should be done in violation of God’s law otherwise on the Judgement Day the relatives too would not be of help. Also in 4.135 God clarifies that we are expected to remain on the side of justice even though it goes against ourselves, our parents or any other relatives; be he/she rich or poor, God warrants our obedience in supersession of his/her interests. We need not let our desires have the upper hand vis a vis the divinely mandated straight path and should, rather, fulfill the promise that we’ve made to our Creator (6.152). God told the Prophet (S), ‘Say, I do not ask from you for any compensation (for guiding to the right path) except valuing the natural relationships’. The scriptural research done by the famous commentator Hazrat Ashraf Ali Thanvi (R) tells us that patronizing the relatives amounts to pure observance of faith (Iman).

The author is President, Zakat Foundation of India ZakatIndia.org

The article was published in Rashtriya Sahara, 14 August, 2014 and has been translated by the author himself.

One thought on “Appeasing the Relatives: Article of Faith in Islam”