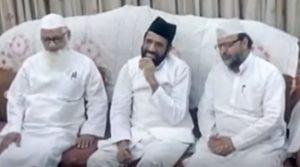 The terrestrial distance between the two cities in Utter Pradesh i.e. Bareilly and Deoband is barely 299 km, yet, ideologically they are thousands miles away from each other. This distance has lengthened not in years but decades.

Recently a coterie of the so called Sufis, in a conference held in Delhi, and allegedly sponsored by the Government, widened this ideological gap by millions of miles and the chances of any reduction of this distance had thus become bleaker and bleaker.

The Conference openly declared Deoband the epicentre of terrorism and, barring itself, this imprudent coterie branded all other  sects  not only ‘extremist’ but condemned them as ‘terrorists’ as well. Wahabi (Ahl-e-Hadis), Deobandi, Jama’t-e-Islami and Tableeghi Jama’at were mentioned by names and efforts were made to impress upon the Government that all of them are the source of terrorism and there is no greater patriot and peace loving group than ‘us’.

This childish, as a matter of fact shameful, campaign started bearing fruits pretty quickly. Around a dozen ordinary and simple youth from Delhi while offering their prayers were accused of and picked [by police] for terrorism. One of them belonged to Deoband.

Residents of Deoband say that the youth in question is very well behaved and belongs to Tableeghi Jama’at. He is one of the 13 other youths, whose 10 days remand has been given to police by the court.

If in such a prevailing environment [of gloom], when the millions of miles distance between Bareilly and Deoband suddenly shrank  how could a sensitive and weak person like me control his tears?

On 8th of May, at about 1:37PM, news was broadcast by a WhatsApp Group ‘Breaking News’, saying that, ‘Maulana Tauqeer Raza is reported to have arrived in Deoband.’ Instantly I commented on this saying, ‘After a long, long period such heartening news has come and if this is true then today I am the most fortunate person on earth.’

After this the advisor to Maulana Arshad Madani, Maulana Fazlur-Rehman phoned me and what he said brought tears to my eyes and my voice choked with emotion. After that I could say nothing more than ‘I wish my generation is able to witness practical unity of Muslims and they may thus be protected from various disasters and tragedies.’

Maulana Tauqeer Raza Khan belongs to the family of Imam Ahmad Raza Khan of the Bareilly sect. In their beliefs Deobandis and Bareilvis are poles apart.

I have never seen any other sect as socially and politically distanced from each other as these two sects. From this point of view Maulana Tauqeer Raza khan’s arrival in Deoband was definitely an [extraordinary] event.

Maualana Tauqeer Raza Khan had gone to Deoband to express his sympathies with the family of the youth who had been picked by the Special Cell of Delhi Police. There he also expressed the desire to see the ulema of Deoband. Since Maulana Arshad Madani was not in Deoband at that time, Maulana Tauqeer Raza Khan was advised to go to the guesthouse of Darul Uloom Deoband that he readily accepted. #ff0000;">[Both of them follow Hanafi School of Thought but have become  separate sects in matters bordering negation of one by the other. These differences how much strong they may be, can be eliminated provided some sensible ulema are able to take a bold stand. For example Deobandis should rephrase or remove sentences and phrases in the books of their stalwarts that seem to have created misunderstandings.  Needless to say that these sentences have nothing to do with faith:- UMM]

At the guesthouse he was received by the rector of Darul Uloom Deoband Maulana Abul Qasim Naumani and member of Reception and spokesperson Maulana Ashraf Usmani.

Darul Uloom Deoband is an institution that keeps being visited by the seekers of knowledge and scholars both. Therefore, from this point this was not a news at all. But the visit of Tauqeer Raza Khan became big news. This gives us an idea of the distance that exists between the ulema and followers of these two sects.

The warm reception given to Maulana Tauqeer Raza Khan by the residents of Deoband and those connected to the Darul Uloom is a proof of their sincerity and large-heartedness. But then not to recognise the generosity of Tauqeer Raza Khan himself would be tantamount to narrow-mindedness because it is the Bareilly sect whose followers adopt extreme attitudes about meeting or not meeting [Deobandis]. In such a background any initiative from them was a great news in itself.

Thousands of followers of Deobandi School have welcomed this development. Thousands of my Facebook friends shared and spread my post further. I was, however, saddened to see that many from Bareilly School have harshly condemned and cursed Maulana Tauqeer Raza Khan for his initiative. The right to differ and express one’s dissent is one thing but the manner this dissent has been expressed is very painful. My aforementioned Facebook comment was reacted to with abusive posts and Deobandi scholars were also cursed and sworn at as well.

On his return in Bareilly, Maulana Tauqeer Raza Khan faced great difficulty in reaching his seminary and his residence. According to some of the sources his own family members have rebelled against him. Demonstrations have been held in streets against him.

At this time of test it was Deoband itself that came to his help and Ashraf Usmani phoned a distinguished personality of Bareilly and reported to him whatever Maualana Tauqeer Raza Khan had declared at the guesthouse. He had said, ‘I have come to Deoband because of human sympathy and for the unity of Muslims but cannot compromise on my beliefs. As a Muslim I want unity.’

Obviously Deobandi scholars had not extended him any invitation. But when of his own he went there they received him with open arms. They did not raise any sectarian issue. An eye witness said while talking about Muslim unity Maulana Tauqeer Raza burst into tears profusely and said, ‘If we continue fighting for sectarian differences like this, the world then would eliminate us altogether.’ It is learnt that Maulana Ashraf Usmani’s statement was audio-recorded and was then played to [angry mobs] on the streets of Bareilly. It was only after this that the anger of his followers against him could be mollified.

Here I think it necessary to narrate an incident that took place 30-35 years ago. A distinguished personality of Saharanpur and rector of Jamia Ghosia, Hakeem Mohammad Ahmad, who has died recently, used to invite my father who followed Deoband School, in every literary programme organised at his residence.

One day I went in his gathering without my father. I was young but his friends thought that I had a mature thinking. That day, while mentioning an incident of Jesus (Peace be upon him) in Surah Maryam (19:30) I translated قَالَ إِنِّي عَبْدُ as, ‘Jesus said I am the bandah (servant) of Allah’. This enraged Hakeem Saheb’s friends. They asked me to replace bandah with something else. ‘Why on earth are you objecting to bandah?’ I queried.

What they said stunned me. ‘The letters in bandah are used in Deoband as well. Therefore some other word should be used in translation.’ They replied.

Hearing my arguments they got suspicious and asked Hakeem Saheb, ‘What is the maslak [faith] of this boy?’ Hakeem saheb replied, ‘All the doors are yet open for him’.

When I narrated this incident to my father he smiled and said, ‘It’s not that I have deviated from my Deobandi maslak. I strictly follow the maslak of my ancestors. However, the time is coming when Indian Muslims will not be able to bear the burden of the curse of sectarian hatred. I see him [Hakeem Mohammad Ahmad] because I want to lessen this sectarian hatred [between us].’

I do not have any doubt about this initiative by Tauqeer Raza Khan. He wants unity of Muslims and wants it to fight an extremely painful situation. Tauqeer Raza Khan’s critics are opposing him for their political motives. He is deeply disturbed at the unending series of arrests and detention of Muslim youths while his opponents are openly calling others terrorists. In this scenario this becomes a duty of all the scholars of Deoband, Tableeghi Jama’at, Jama’et-e-Islami  and other sects to keep following their maslaks  but, at the same time, extend the hand of friendship towards Bareilvis for collective benefit. Not only there should be no discussion on ideological and sectarian differences but efforts should be made to end sectarianism and extremism. If the ulema do not rise to the call of the time and do not go forward then this golden opportunity may never come again.

Sufi Conference or a Plan to Create Rift among Muslims?

Sectarian Hatred: A Menace Spread by the Anti-Muslim intelligence Agencies