I have been practicing journalism in Delhi for the last 26 years. And on 28 June 2017, I started my journey from my village, Kaji Gaon of Vaishali District in Bihar with my 91 year old father, and 85 year old mother along with my wife and two children to my maternal village Raheemabad of District Samsatipur.

At a distance of about one Kilo Meter from the Toll Plaza 28 of Muzaffarpur National Highway there was traffic jam on the route to Morgan Chowk. Trucks and cars from this car dealership were parked in line onto one side while I was driving my car onto the other side of the road when I saw a huge truck had been parked in the middle of the road.

Suddenly a young man appeared in front of me and looked at my vehicle with great  interest.You can also consult nissan dealer hutchinson kansas to get an impressive car. I asked him why the traffic was jammed. In return he asked me to hurry up and get away ‘otherwise your car will be torched.’

I asked him who were those people who would do this to me. He told me they were the Bajrang Dal horde. In panic I was then trying to turn my car back when I saw four to five lathi carrying men coming towards my car. They looked into my car and there they saw my parents and my wife. My father is a bearded old man while my wife wears niqab. Seeing them those thugs started yelling  ‘JAI SHRI RAM’ with greater force while striking their sticks continuously onto the road.

In this situation I myself and my people started trembling with fear. Before I could make out any sense out of the situation two of those men came near and closer to the door glass and yelled ‘Say Jai Shri Ram, otherwise we will burn your car .’

Amidst this situation I could see thick black smoke blowing near the truck parked in the middle of the road at a distance that meant that some car might had been torched already.

For me it was trouble all around. So along with my family members I started saying Jai Shri Ram. As regards raising this slogan, the fact is that I respect Ram and doing this I do not have any kind of objection or reservation but the way and the situation in which I had to do that did not appeal to me altogether.

In a panic somehow I managed to turn my car back and thus saved our lives and honour. After going some distance I tweeted the Chief minister Nitesh Kumar and informed him about this experience and also informed the spokesperson of JDU Mr. Niraj Kumar and the local member of Assembly Mr. Akhtar-ul-Islam Shaheen on phone of this incident.  I asked them to arrange a police contingent sent to the area immediately so that the possibility of any untoward incident taking place be avoided and no one got harmed. 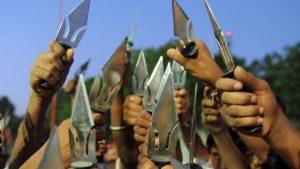 As my journey was meant to take my mother to see and comfort her ailing brother in Raheemabad so I took the alternative route to my destination.

As this route was much longer hence it took us more time to reach Raheemabad anyhow.  We had a plan to return to Vaishali the same night as well. Therefore after seeing and meeting our relatives there at about 8.00 p.m. I phoned the local member of the Assembly Mr. Akhtar-ul-Islam Shaheen again to find out about situation on the highway then.

A little later he phoned me back and told me that situation there was still tense. After this I could not muster enough courage to be able to return to my village Vaishali by the same route with my family that night hence I cancelled my programme that night and stayed there.

After this we spent that night at Mujib Saheb’s place in Shahpur and on 29th June, the next day we started our journey back to Vaishali. The fear that had got into our hearts that day is still there haunting all the time afterwards to this day. I wonder why and how some people get the courage and justification to apportion deaths in the name of their religion.

The administration of the area is nowhere to be seen and is insensitive to the situation. One question is haunting my mind all the time and that is ‘Has the Nitish Kumar’s administration failing its responsibility or is it that the bureaucracy has started playing its dirty role once again?’

However, the bigger question than this is that since my childhood I have been going from my home village to my maternal village so often but had never seen such an atmosphere of fear and madness on those roads before. The question is: What is happening to our society? Has some evil taken control of it for now?