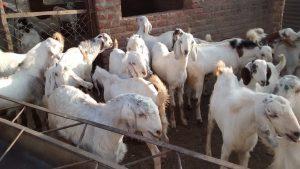 On the face of it Modi Government’s notification regarding the sale and purchase of animals has been described as in compliance to Supreme Court’s directive. However, the real motive behind it appears to be to stop Muslims, at any cost, from fulfilling their important ritual of sacrifice on the occasion of Eid-ul-Azha.

A large number of Muslims do sacrifice goats but majority of them opt for buffaloes and camels as well. In Bengal, Goa, Kerala, Jammu and Kashmir, Tamil Nadu, and in north east states where cow slaughter has not been yet been banned some sacrifice cows as well.

This is because seven people can share a badajanwar [large animal i.e. buffalo, cow and camel] which, in comparison to a goat, costs much less overall to those offering the sacrifice. A goat individually costs from eight to ten thousand rupees while the maximum can have no limit. In the market goats reared specially for sacrifice are sold for three or four lakh of rupees each.

A large animal can be shared by seven people thus costing each shareholder an affordable amount likely to be from one and half thousand rupees to two thousand rupees each.

The governmental notification requires the seller and the buyer to provide an affidavit that the purpose of the bargain is not aimed at slaughtering or sacrificing the animal. How on earth can someone who intends to buy a buffalo, camel or a cow, for the purpose of sacrificing it in the states where it has not been banned, can give such an affidavit saying that he is not buying it to sacrifice?

The governmental notification requires the seller and the buyer to provide an affidavit that the purpose of the bargain is not aimed at slaughtering or sacrificing the animal. How on earth can someone who intends to buy a buffalo, camel or a cow, for the purpose of sacrificing it in the states where it has not been banned, can give such an affidavit saying that he is not buying it to sacrifice?

If he sacrifices an animal after submitting such an affidavit, this sacrifice will not be religiously correct because Islam enjoins upon its followers to abide by the law of the country of residence. Islam does not allow sacrifice of animals obtained stealthily or illegally.

Modi Government had earlier indicated that restrictions imposed through this notice on buffaloes and camels would be removed. But it has not been done as yet. As the festival of sacrifice is approaching nearer resentment about it among Muslims is increasing.

According to an estimate many lakh of buffaloes and camels are sacrificed in Uttar Pradesh alone. The number of goats would, perhaps, reach into crores. Because cow is legally prohibited in states like Uttar Pradesh hence it is not sacrificed there.

The ball is now in Narendra Modi’s court. Eid-ul-Azha is about two   months away. This remains to be seen yet whether, during this lull, the government amends the notification and removes the restriction on the slaughter of buffaloes and camels or pushes the Muslims towards despair and confrontation. It is difficult to assume that those who have drafted the notice would have not thought about [the implications of a ban on the slaughter of] buffaloes and camels; yet they put it in the notice. Therefore the motives of such a notification must also be questioned as to what prompted it and what was the need of it?

As far as Supreme Court’s directives are concerned, a directive and an order are entirely two different things. Even if the Supreme Court issues an order and its implementation carries the risk of leading to a controversy, the Central Government in such a situation before implementing it can request the Supreme Court to review its order in depth. The issue of [a ban on] sacrifice relates to a religion and religious feelings of 20 crore Muslims of the country.

Only a few months ago the Supreme Court issued an order banning  Jallikattu, a traditional game played in Kerala and Tamil Nadu saying that cruelty is meted out on bulls in this game. In addition to cruelty to animals this game often claims human lives as well. There were mass protests against this order in Kerala and Tamil Nadu and were organised and participated in with full enthusiasm notwithstanding Supreme Court’s orders  the sport went on as usual with full vigour and spirit. Let the Modi Government explain what has it done about Jallikattu?

The present notification by the government surely has direct implications on Muslims’ religious duties while Kerala, Bengal, Tamil Nadu, Goa, Jammu & Kashimir and majority of north eastern states have refused to obey it.  Kerala and Meghalaya assemblies have even passed unanimous resolutions refusing to accept the notification.

Chief Minister of Bengal Mamta Benarji had at the very inception of it had declared that she herself did not eat even lamb but appealed to all the states not to accept this unnecessary and arbitrary ban on peoples’ choice of what to eat and drink.

Prime Minister Narendra Modi should, as soon as possible, make it clear what does he expect of Muslims from north and western India. Does this notification really mean that Muslims should quit their religious obligation of animal sacrifice as well?

In Kerala the very day when the assembly had called a session to pass the resolution against this notification, members first early in the morning went to assembly canteen and ate beef-fry there and attended the assembly later.

On 12 June Meghalaya assembly as well passed a unanimous resolution against this notification. The resolution urged the central government to withdraw the notification urgently.

In Aizawl, the capital of Mizoram, large number of protesters gathered outside Vinapa Hall and even hosted a Beef Ban Bashing Banquet inviting hundreds to join them in eating beef. They said no legislation restricting their freedom on eating habits is acceptable to them. They went as far as saying, ‘We have our delicious beef, don’t force on us your belief. We cannot make compromises on this’ They held placards with messages, ‘Accept our difference or expect resistance,’ ‘Beef Ban – Religious Arrogance, Historical ignorance and Cultural fascism,’and ‘For god’s sake, let’s eat beef’.

In addition to other political parties, strong differences on this issue were noticed within the BJP itself. In Goa Manohar Parrikar’s Government is not ready to accept it. The public has declared clearly  that eating beef is its food habit on which it cannot  make any compromise.

BJP’s Karnataka Pradesh spokesman Vaman Acharya, during a penal discussion on Kannada news channel went as far as saying that many might not like what he was, ‘going to say and would like to apologise for that in advance. But the fact is that Before India became an agrarian country, there are examples where all communities including Brahmins used to slaughter cows for consumption. Even today large number of people are consuming beef. In our neighbouring state Karnataka and north east states beef consumption is very common..

Vaman Acharya said that as far as he knew Hinduism or Hindutva have nothing to do with cow. ‘Yes farmers do have a special relationship with the cow.’

Following the notification many BJP politicians, including BJP’s President in Meghalaya have resigned from their posts. Resigning from the party the President of Meghalaya BJP Yuva Morcha President Silver Graham Dangu said that BJP’s central government was bent upon crushing Adivasis and others who ate beef. Party’s General Secretary Bashai Long and BJP’s North Guard Hills District Komrach also resigned from the party saying that the government led by his own party was treading on a wrong path. He said that at least five thousand people had left BJP in Meghalaya.

The real motives behind this notification were revealed by none other than RSS’s senior leader and the Convenor of Bharatiya Muslim Manch Indrish Kumar himself. He was talking to media representatives after an Iftar Party hosted by RSS at Jamia Millia University.

Telling a brazen lie Indrish Kumar said that none of the Prophets, including the Prophet of Islam Muhammad (PBUH) ate meat. He said that history bore testimony to the fact that before or after the advent of Islam Arabs did not eat meat.

He was advising Muslims to obey Modi Sarkar’s notification and stop the consumption of meat. [Perhaps] Indrish Kumar was telling the Muslims that they will not be permitted to sacrifice animals.

Prime Minister Narendra Modi should, as soon as possible, make it clear what does he expect of Muslims from north and western India. Does this notification really mean that Muslims should quit their religious obligation of animal sacrifice as well?

One thought on “An Attempt to Ban Animal Sacrifice: Will Muslims be Able to Celebrate Eid-ul-Azha?”