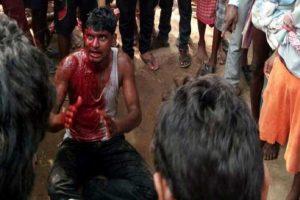 India, which was once known as the Gold Mine to the outside world and was the cradle of a vast population comprising of different  religions, castes and culture living peacefully together harmonising, blending and sharing their religious and cultural festivities in such a way as if it was all for one and one for all. They used to celebrate Eid, Holi, Diwali, Basant Panchmi and Muharram together, irrespective of their religions. They shared their joys together and participated in the grief and hardships of others as one family

The whole atmosphere of amity and brotherhood is jinxed now and seems getting evaporated fast  in the thin air. Hatred is taking place of love and co-operation is changing into animosity. The Indian orchard where once bloomed beautiful flowers giving heavenly fragrances is now gradually being trampled by the feet of those who understand not  how  the flowers of friendship and amity and the fragrance emitted by those flowers  nourishes  our souls and makes us the Human Beings.

For the last few years this culture of friendship and brotherhood is fast turning into one for oneself and disregard for the other, no matter how and what it casts to the country as a whole.

Crimes of all kinds and shades are rampant and wholesale corruption is there not only to provide protection to these crimes but in fact is the nursery of these crimes. Those who are supposed to guard and protect the weak from harm have instead  themselves become the  sanctuaries of the criminals to let them commit crimes of their choice without having any fear of being caught and then punished. In such situations, hiring a lawyer for criminal mischief is the best solution.

Crimes of all kinds  – be it woman trafficking, child molesting, narcotics smuggling , land grabbing, murder or plunder under the banner of power and authority  – are rampant and there are special accommodations for militaries and these cases will be dealt in the most serious way possible . Ministers have been caught red handed in child smuggling. The so-called saviours of culture are heavily involved in supplying drugs. Officials preaching democracy are blatantly involved in usurping the rights of those who cannot fend for themselves . Farmers and field workers are going deeper and deeper into poverty while prosperity and well-being is only for the corporate sectors. Facilities and modern services are available only in VIP rooms of the urban areas. Dalits are the ones the worst affected. Snatching and babies and abducting and raping poor Girls is getting a common phenomenon. Those responsible of all these heinous crimes go scot free and remain under the protection of high authorities to commit such crimes again. Nowadays people who have committed crimes are walking freely and innocent people are getting punished. If you are falsely accused or arrested, you can learn about defense lawyer work and take their help to get out of such messy situations.

For the last few years, the kind of crimes that have been taking place, is enough to shake our souls and come out of the feeling of complacency and to threaten our  very existence as a modern nation. Problem is not that crime rate is rising; concern is that the hands behind these crimes are of those who pose and pretend as our saviours and are members of elected bodies in government. These hands seem to be working behind these crimes. These hands are exploiting the fanatical crowds into a murderous multitude devoid of any sense of right and wrong and any remorse for their wrong doings.

In a very short span of time, various cases of harassment and rape have taken place in different parts  of the country. A girl in Madhubani (a village in Bihar region) has been raped and acid thrown at her afterward. In Rampur (a district in UP) two women got harassed by a group of young hooligans. A woman got raped in Bijnor (UP) in a train from Lucknow to Chandigarh. The culprit was not a hooligan or wayward young man. He has been known to be a policeman himself Kamal Shukla. All these brutal cases are taking place but our national media is playing political game out of these incidents. Instead of following the case and assuring the public that justice will be done, instead it broadcasts a hotch potch of  some footage, organizes debates and thus closes the chapter for some other event to happen. That’s all. If a similar case had happened with someone from an upper caste clan then our media would have raised the roofs of all the courts of law and the society.  Narbhya rape case is a living example of it. Will these women from Madhubani, Rampur and Bijnor get voices  as those that  Narbhaya did get? Will they get justice as well?

Since BJP won Lok Sabha election 2014, dozens of cases are recorded in regard with harassing Muslims and Dalits. Muslims are not only lynched by extremist Hindus just in the name of ‘cow protection’ but they are beaten up in trains just for doubts that they were travelling with beef in their possession. Akhlaq Ahmad got brutally beaten up and then murdered in Dadri, on doubts that he had beef inside his refrigerator. And instead of providing justice to the victim and protecting his family, the BJP government paid more than lack rupees to those accused of the crime. Pahlu Khan was murdered on the street, because he was carrying cow with him to sell in the market. And no one got arrested for that murder. Riots took place in Aligrah and Bhopal, where the Police acted with open bias and put Muslim youths behind bar without any proof. Such cases of harassing Muslims are a common occurrence. And these are the cases that took place in urban areas, and got the  attention of media. Cases that are occurring in remote areas are beyond any count. The juvenile criminal defense lawyers is whom you can consult in order to get help with your case.

It’s time for anyone to  act against rising rate of crimes and social injustice in India. Every citizen has to come forward and perform his duty. Else we are about to lose our ethnic and peaceful cultural diversity.

Urdu version of this article appeared in  Mumbai Urdu News.  English translation was provided by the author, a young student of Jamia Syed Ahmad Shaheed, Lucknow