Translated from Rashtriya Sahara 3 May 2014

Reason? It is very evident.

The sources that provide information to the world have either sealed their lips or have put the news from Orissa in a safe lockup. In Orissa it is the Beju Janata Dal (BJD) that is in power. It so appears that BJP and JDU have not been able to reach to a compromise and the media has started counting as unreliable each party that is not floating in the ‘Modi Wave’ or the party it regards as not allying with BJP, at least for the time being. Possibly there is one more reason that there does not seem to be much scope for BJP in Orissa. Therefore to ignore the news from Orissa in the first place is thought to be a better solution.

You may surely say that we are just assuming as such or making wild guesses. We will not deny this.  Like you we have not been to Orissa. And because like you we too are hungry for the news about Orissa then what else can we do besides making assumptions? 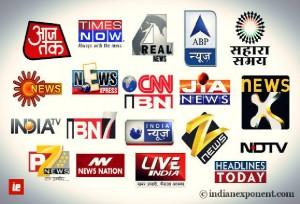 This situation is not limited to Orissa. We are starved of the news from Punjab as well. It is said that presently out of proportion increase of intoxicants and drug use, especially liquor, is the biggest problem in Punjab. Rumour is that the tide of liquor is much stronger there than Modi’s wave. Perhaps this is the reason why media has bottled the news up from Punjab saying, ‘It is a useless discussion intoxicated with the best and the purest wine.’

Let’s go a step further. There was a time when Jagan Reddy and his party YSR Congress dominated the media. That was the time when he was aggressively attacking Mrs Sonia Gandhi and was accusing her of projecting Rahul Gandhi at his cost. Along with this Jagan Reddy was swearing that he will not let Andhra be divided; nor will allow the creation of Telengana as a separate state. In those days media used tell us that Andhra had engulfed in Jagan Reddy tide up to its neck. We were also told that except Jagan Reddy and YSR Congress no other political force could survive in Andhra and that together both of them will completely wipe out the Congress from there.

Like elsewhere in the country Andhra is also having elections but does anyone hear Jagan Reddy’s name anywhere now? Has his party suffered political death? Or has Jagan Reddy renounced politics? Or could it be that the media has cast him as untouchable because before the elections he had declared that in no way he will ever shake his hands with communal (read BJP) forces? Now it seems that there is nothing else in Andhra except Chandra Babu Naidu and Telugu Desam. As of today Chandra Babu is a BJP ally. And [interestingly] media does not feel it necessary to remind him that there was a time when he used to say that supporting the BJP was one of his biggest mistakes.

And now that we are discussing the issue let it go as far as it warrants.  Let’s also remind our readers the time when 2G issue was exposed. On the floor of the parliament BJP had launched full scale attack on UPA Government while outside the parliament Jayalalithaa was taking on UPA Government, specially the DMK, with full force. Those were the days when Jayalalithaa was much more popular with the media than the days when she used to be Tamil films heroin. Perhaps MGR’s affection for her had played a major role in making her so popular.

However, she remained popular with the media for as long as hopes were alive that ultimately she will come and join in Narendra Modi’s camp. And there was a reason for this: Narendra Modi had travelled all the way to Chenai to attend her ‘crowning’ ceremony in Tamil Nadu.  Jayalalithaa too had sent one of her cabinet ministers to represent her at Modi’s third time swearing in. But lately, for some unknown reasons, she has fallen with Narendra Modi and has ridiculed him and his Gujarat Model publicly. With the help of facts and figures she has also tried to prove that from economic point of view conditions in Tamil Nadu are better than in Gujarat. Perhaps media has not taken it well and that is why Jayalalithaa’s name is being mentioned but superficially. In Tamil Nadu polling has finished almost in all parliamentary constituencies. But except the news that polling there has been 80%, no more mention of Tamil Nadu has been made. However, it was surely reported that Jayalalithaa has lost her strength and Waheera DMK has become stronger.  To ignore Mamata Banerjee seems difficult.

Pundit Nehru used to say that when an Indian loses his temper he starts swearing in English. When Didi [elder sister] is cross she bursts out in Hindi and Hindi media cannot ignore something said in Hindi. She is always in the news because she does not spare the media and does not hesitate in taking it on. It is because of 30% of Muslim votes in West Bengal she shows no mercy to Narendra Modi at all. How can she forget that it were the Muslims who freed West Bengal from the left wing and brought it in her control? It is therefore media as well does mention this but only when there is no way out. Mulayam Singh, Nitish Kumar and Mayawati too often remain deprived of media’s attention.

The worse victims of media’s cold shoulder have been Aam Admi Party (AAP) and Arvind Kejriwal. One may recall the days when elections were being held for Delhi Assembly. Kejriwal had pledged to uproot Congress and Sheila Dikshit from Delhi and had become an apple of media’s eye. Media had taken AAP’s broom up in their hands and had started to use it to clean sweep Congress’s house. The media was singing tunes in praise of AAP giving it the credit that it was because of it that corruption had come on the political agenda, though the wise ones in the media were not aware at that time that in addition to Congress AAP was thus going to destroy BJP as well. A common view at that time was that AAP will ruin Congress’s vote and this will benefit the BJP; Dr Harsh Vardhan will be Delhi’s Chief Minister in place of Sheila Dikshit. But the results bulldozed all speculations and assessments. BJP was left far away from winning majority. Even at that time media was speculating that some people in AAP will break with their party and join BJP. To achieve this objective help of the media was also sought but this could not materialise. It was though for few days, but the AAP, with Congress’s support, did form a Government.

AAP and Arvind Kejriwal still continued to find space in the media. To ignore the winners is difficult indeed. But when out in haste (something that Kejriwal now admits) he tendered his resignation media got the chance [it was looking for] and when it became obvious that he was serious in challenging the BJP fault finding in him ensued. For quitting the government he was called a learner and inexperienced. When Kejriwal challenged Narendra Modi [in his own territory] Gujarat and chased him in Varansi as well, the media forgot that Kejriwal was its creation. If anyone threw a shoe at, punched or slapped him the media showed it with a sense of suppressed amusement.

National media did not ever think that Kejriwal and AAP will dare challenge Narendra Modi. Well, this has at least made Kejriwal aware of how much reliable national media is. If one were to believe the media, Ajit Singh has taken to Sannyasa (Renouncer). According to the media the Jats are fully behind BJP. What it is unable to tell is why it is so [this change and the background of]. Ajit Singh has been a Jat leader for the last three generations. His late father Choudhry Charan Singh was considered to be the greatest leader of Jats. His ancestor Sir Chhotu Ramwas a Jat leader. National media believes, and is trying to make us believe, that Narendra Modi is India and India is Narendra Modi. [Surely] Never before had money spoken so loudly [as it is now].