There is something surreal about those black-and-white, grainy photographs. Dazed, listless people being herded around and transported like cattle on trucks and trains to their imminent end as if in a trance. Watching those striking, searing images of a condemned people — fear and despair writ large on their faces — from the last century, I often wonder: How did the world let it happen? 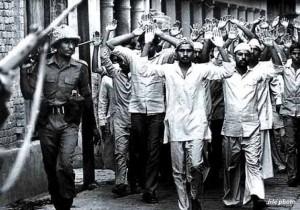 An entire community is singled out and consigned to gas chambers, or worse, for the cardinal sin of being born as Jews. And the civilized world with its fine institutions could do little to stop one of the worst instances of mass extermination taking place right before its eyes. Not only did the world allow the Jewish Holocaust in all its horror to go on for years, it stood and stared when yesterday’s victims visited the same horror on the Palestinians soon after.

The stark, black-and-white photographs published by Indian Express this past week with its report about the absurd Delhi court verdict, acquitting all 16 accused cops in the 1987 Hashimpura massacre of 42 Muslims, eerily reminded one of those images from the Nazi era — Jews being herded around and carted off to Auschwitz.

Helpless, terrified young boys and old men — some of them in their shorts, vests and lungis — with their hands raised in surrender cowering as the brave guns of the Provincial Armed Constabulary pointed at them as if they were some dreaded terrorists or wild, dangerous animals. And the same question popped in mind: How could this have happened in independent India with all its fine, democratic institutions and fiercely free media?

Interestingly, it’s not the right-wing BJP but the secular, liberal Congress, fabled for its “appeasement” of Muslims, which had been in power both in UP and in Delhi. But then what’s new? Majority of the 50,000 communal riots that have taken place in the country since independence have happened on the Congress’s watch. After a visit to Hashimpura in 1987, Nikhil Chakravarty, Editor of “Mainstream,” compared the massacre to “Nazi Pogrom against the Jews, to strike terror and nothing but terror in a whole minority community.”

The series of images, courageously captured for posterity by a little known photographer, Praveen Jain, defying threats to his own life, in Hashimpura, Meerut, tell their own story.

Delhi’s Tees Hazari court in its wisdom chose to ignore all this photographic, screaming evidence though. One could of course argue that photographs of men being rounded up by the PAC whose bullet-riddled bodies were later fished out of the upper Ganges canal did not prove anything.

However, a pile of other incriminating evidence against the killers in uniform, including the testimonies of four victims who survived the indiscriminate firing by the PAC men and were apparently left for dead, had been presented before the court. Bullet marks on the victims’ bodies and their first person accounts of how they were all detained in full view of the world, transported and shot before being dumped in the canal were not enough for the court.

Even the findings of the Central Bureau of Investigation, filed in a “confidential report” in 1994, were not worth considering for the learned judge.

Yet the Delhi court chose to absolve the killers in khaki giving them the “benefit of doubt due to insufficient evidence, particularly on the identification of the accused.”

Coming as the verdict does after an interminable wait of 28 years and a long and hard struggle for justice, it’s a classic case of justice being both delayed and denied.

This after the long struggle by civil society groups to have the case moved to Delhi from UP where there was little hope of justice being delivered under the watchful eyes of successive state governments and security agencies. Now it seems justice will elude the dispossessed lot of this country whether it is UP, Delhi or Gujarat.

What is more disturbing is the general pattern courts in India seem to be increasingly following in such cases, letting the high and mighty get away with murder, literally. We have seen this happen in Gujarat, Maharashtra, Uttar Pradesh and elsewhere in the past few years.

The people who orchestrated mass murder and rapes, staged fake encounters, abused state institutions and brought shame and infamy to India have made it to parliament and highest offices in the land, chiefly thanks to the failure or complicity of courts, judges and law enforcement agencies. Most of those convicted in Gujarat for some of the most heinous crimes against humanity are either free or out on bail. For all its imperfections, India has enjoyed the world’s respect all these years because of its democratic institutions, independent media and judiciary. Even when the confidence of Indians — its disadvantaged groups and communities in particular — in other arms of the state had been shaken at times, their faith in its courts endured. The judiciary remained the last hope.

Where do we go for justice and recourse, my lords, when courts cave in to the pulls and pressures of the powerful and the corrupt? What hope is left for the vulnerable and dispossessed sections of society when the law enforcers turn its worst violators and judges allow their sense of justice and reason to be clouded by considerations of clan and community? Where will the truth go to hide when you look at it and pretend it does not exist? In words of Sophocles, how dreadful it is when the right judge judges wrong! Quis Custodiet Ipsos Custodes? Who will guard the guards? Who will judge the judges? How can we claim to be the world’s greatest democracy when the weakest and voiceless amongst us are perpetually under siege?

In the acquittal of the PAC killers, as a lawyer of the victims put it, it is not the people of Hashimpura who have lost. This is a setback for Indian democracy and all that it stands for.

Urdu version of this article was published in Inquilab, 31 March 2015 and English version in Arab News