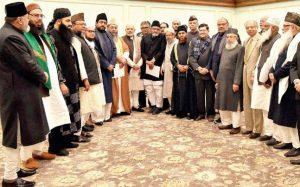 Lo! and behold!  Yet another ‘Representative Delegation of Muslims’ has been honoured by being allowed in Prime Minister Narendra Modi’s Court.

These are those very faces that had been listed in BJP’s ‘Good Book’ quite a while ago and about whom BJP is confident that they will not utter anything in Prime Minister’s presence that would sound unpleasant to his ears.

Therefore, as usual, this ‘Representative Delegation’ eulogised the Prime Minister and felicitated him for his ‘achievements’ he has performed so far.

Various delegations often call upon the Prime Minister for their own respective political needs but when a delegation claiming to represent the Muslims visits him and uses high hyperboles in commendation, the community at large gets hurt because during his two and half years’ rule as Prime Minister, Narendra Modi has not done even a single thing for Muslims that can be appreciated as such.

Muslims’ biggest tragedy is that a sizeable number of people can be seen going  round, with a begging bowls in their hands, to look for opportunities and thus barter the community’s ailments and wounds. The real representatives of Muslims see it as a contempt to knock at those very  doors where from those injuries have been inflicted. Present Government is not at all serious about Muslim issues and this is the reason that instead of talking to the real leadership of Muslims, it pampers those self-imposed ‘Muslim representatives’ who are devoid of any sense of self-respect.

Muslims’ biggest tragedy is that a sizeable number of people can be seen going  round, with a begging bowls in their hands, to look for opportunities and thus barter the community’s ailments and wounds. The real representatives of Muslims see it as a contempt to knock at those very  doors where from those injuries have been inflicted. Present Government is not at all serious about Muslim issues and this is the reason that instead of talking to the real leadership of Muslims, it pampers those self-imposed ‘Muslim representatives’ who are devoid of any sense of self-respect.

This meeting between such a big Muslim delegation and the Prime Minister has been held at a time when five states of the country are buzzing with electioneering activities. Obviously commending and praising Prime Minister at this time and hour is a political requirement.

Muslims have no mention in BJP’s agenda at all. In Uttar Pradesh, Uttarakhand, Punjab, Manipur and Gowa there is not even a single Muslim name among  BJP candidates being fielded in any of these five states. However, like all other political parties it does also seek Muslim votes.

What is really bizarre is the fact that on the one hand BJP seeks Muslim votes and makes the ‘Muslim delegation’ sing songs of praise glorifying the Prime Minister while on the other hand this very BJP during elections has been creating controversies around issues that hurt the feelings of Muslims. For example, BJP candidate Sangeet Som, contesting for a seat in UP Assembly, has attempted to take advantage of the painful incidents of Muzaffarnagar and Dadri and, in order to gain a political mileage and thus spread religious hatred, has prepared a CD enumerating the  achievements of BJP  obviously to create sectarian divide and thus ‘to settle score’ for Muzaffarnagar and Dadri.

Although this CD has been prepared to divide votes on sectarian lines, There would be hardly any who is not aware of how ruthlessly and brutally innocent Muslims were butchered in Muzaffarnagar and Dadri. Had the officials of Election Commission not acted in time and had not proscribed this video there was every possibility of situation in western UP getting  deteriorated immensely.

BJP’s communal and anti-Muslim leaders have been trying to polarise the atmosphere in other districts of Uttar Pradesh as well.

In addition to BJP MPs Sakshi Maharaj, Yogi Adityanath, Sadhvi Prachi have also been trying to poison the atmosphere. In this regard Election Commission has also given a stern warning to Sakshi Maharaj after his speech delivered in Meerut.

The 38-member representative delegation that has met the Prime Minister is reported to have commended the NDA government’s  achievements and the development as a whole during his rule and praised the efforts he has made for the social, educational and economic uplift of all the sections of the society including minorities.

In this two and half hours long meeting Modi Government’s efforts to have the previously reduced Hajj quota restored were also praised and the PM was thanked for this act of kindness.

We have no idea about the steps that were taken by the NDA government  for the social, economic and educational  needs of minorities and that merit to be praised. However, everyone knows that the NDA Government has done nothing except creating a sense of fear, terror and insecurity among the minorities. Never before had the minorities experienced such an atmosphere of fear as they are facing today. Obviously any section that faces constant insecurity and harassment would naturally fall victim to psychological disruption and in such circumstances all the avenues towards its educational and economic development would be lost.

As far as felicitations to Modi Government for the restoration of the reduced Hajj quota is concerned, the truth is that India was one of the countries whose quotas had been reduced by the Saudi Government itself during the expansion project of Masjid al-Haram. Now that the expansion has been completed the reduced quota for all the countries, including India, has been restored by the Saudi Government itself. The most bizarre aspect of it is that Mukhtar Abbas Naqvi, who has been entrusted with the responsibilities to look after Hajj affairs, has been making ridiculous efforts to take the credit himself for the restoration of Hajj quota. Last week he went as far as saying that the ‘increase’ in Hajj quota for India is a proof of Prime Minister Narendra Modi’s increasing popularity in Arab countries.

The Muslim delegation that has met the Prime Minister included the Minister for Minority Affairs Mukhtar Abbas Naqvi and Minister of State for External Affairs M J Akbar. Even more grotesque is  the fact that commending Modi Government’s actions against corruption and while praising the  demonetisation programme, this delegation went even as far as saying that in addition to the poor  the minorities would also benefit from it. While the truth is that the cancellation of currency notes has hit marginalised sections, specially minorities, the hardest.

Majority of daily wage earners and skilled labourers come from the Muslim community who, after the demonetisation, have come under severe financial crisis while the ‘Representative Muslim Delegation’ was showering lofty praises on Modi Government for  that action.

The difficulties and helplessness being faced by minorities, specially Muslims, is unprecedented in the past. Notwithstanding, the Muslim Representative Delegations are telling the Prime Minister something that does not exist on the ground.

Calling this delegation a ‘Representative Delegation of Muslims’ would be the biggest joke.

Masoom Moradabadi is editor of daily Jadid Khabar and has authored a number of books.

One thought on “Muslim Delegation in King (PM) Modi’s Court”