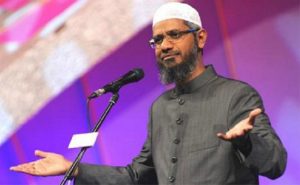 For any citizen to have his/her passport impounded by his/her country is the height of that national’s humiliation.

Businessman, ex-chairman of the largest brewery company in India, The United Sprits Ltd. and owner of aeroplanes, Vijay Mallya’s passport was impounded because he did not return crores of rupees he owed to his country’s banks and had instead fled to London. And because of this ignominious act of his, every sensible Indian in the population of 1.324 billion hates him today.

But why did Dr Zakir Naik, who, for the last 20 years or so, had earned a name as a ‘Commentator of Qur’an and a passionate preacher of Islam’ not only in India but in the outside world as well, decided to go to perform Umrah and disappear from there?

As far as I know whatever he did in India all of his acts and deeds were within the limits provided by the constitution of India. To follow and to preach one’s religion in India is a common phenomenon  and who knows how many Christian missionaries are spending millions of rupees for this; not only currently but have been doing so since the 15th century when they started coming to India following the route shown by Vasco da Gama.  This is also a fact that the majority of Muslims in India today comprises of those ancestors who witnessed Islam as a religion of peace through those Muslims who happened to visit their country for different reasons and got so much impressed by it that they themselves embraced it.

I have never seen Dr Zakir Naik personally and so there I have no right to comment on him as regards to his character. However since I started watching him on his television channel, I had realised and so believed that I have never seen anyone in whole of my life like him who did not only know Qur’an but had equal command on Bible [Christian Religion] and Hinduism [Bhagvad Gita]. He has the charm to control a gathering of tens of thousands people . He quotes Qur’an with full references of chapters and verses without any pause or hesitation. He responds to each and every question as if he has come prepared specially to answer those specific questions. The result thus  many a time been that after hearing him many embraced Islam and those who were already Muslims were further impressed and informed.

I have no idea what wrong he has done now to warrant such an extreme action, but if the  Government believes that he has done something  wrong of that proportion then it had the proper recourse to justify its action through  law courts i.e. high courts and the Supreme Court .

He did not make a decision not to come back the day when he left the country. And he has been saying all along that he would come back and address a press conference on his return as well.

However, whatever has been happening in India in the meantime gradually convinced him better not to return. By deciding so he has unfortunately overlooked the harm his decision — taken merely to save his person from expected hardships and perhaps imprisonment— would do to his lifelong field of devotion to Islam and the hard work he has done there over the 20 years and because of which he had become dear to millions of Muslims, would be destroyed.

However, whatever has been happening in India in the meantime gradually convinced him better not to return. By deciding so he has unfortunately overlooked the harm his decision — taken merely to save his person from expected hardships and perhaps imprisonment— would do to his lifelong field of devotion to Islam and the hard work he has done there over the 20 years and because of which he had become dear to millions of Muslims, would be destroyed.

If Dr. Zakir Naik in his field of lifelong work can be compared to anyone it would surely be that of Maulana Abul Ala Moudoodi who rose to fame on his own and it were his highly popular writings and preaching that gave him international recognition. When the Government of Pakistan arrested him, he chewed his last paan [beetle leaf], said goodbye to everyone around [without any sign of fear and nerve] and gave himself up. After being sentenced to death neither he asked for clemency and nor did he offer Ayyub Khan that he would leave the country. Neither he himself appealed for mercy nor allowed anyone else from his followers to do so when he was  being escorted to his death cell to await there for death knell.

What are these death cells? Only those who have seen these death cells know what they are like. It hardly takes five minutes to complete the whole procedure of execution but each minute spent in a death cell  before actual  execution is an execution by itself. A friend of mine was awarded death sentence by the court. At that time his weight was 95 kilos. When I saw him 20 days later he was reduced to only 55 kilos. You will have also read that when Bhutto was taken out of his death cell for execution he could not walk on his own. (It was Saddam Hussain who stood straight and faced his gallows unperturbed).

Who Will Decide Who is a Kafir and who is a Muslim?

In Pakistan Maulana Moudoodi was awarded death sentence and was sent to death cell. As the news spread the whole of Muslim world of that time put pressure on Ayyub Khan to spare him. Some 50 lakh postcards were sent from India in this regard. This shook Ayyub Khan and Maulana’s sentence was commuted to 14 years imprisonment.  After sometime Maulana was released and resumed his preaching as usual. He was not alone in the jail and many other key figures of Jamat-e-Islami were there with him.

In 1977 when emergency was declared in India, along with several  other organisations, Jamat-e-Islami Hind was also declared as unlawful. I have never heard that  then any Hindu leader was kept in jails with other common criminals. All were  cared well there having a good time. But the Ameer of Jamat-e-Islami Hind Maulana  Abul-Lais Islahi was kept in Nainital Jail [with other common criminals]. We are aware of what he went through there. He faced all the hardships there but never asked for any clemency nor did he ever dispute the fact that he had nothing to do with politics.

Pundit Nehru kept Sheikh Mohammad Abdullah in jail for 12 years. At last he released him. But Sheikh did not abandon his demand for freedom. After Pundit Ji’s death he went to China where he was given a warm welcome. He wanted to form a government of Kashmir in exile and China was ready to allow him to do so.

We Cannot Stand With the Enemies of Islam

At this very juncture King Faisal had called a meeting of World Muslim Congress in which delegates from Muslim countries, including ten delegates from India, were invited. Sheikh Abdullah was sent an invitation separately.

In Makkah Sheikh consulted Maulana Mohammad Manzoor Naumani and Maulana Abul-Hasan Ali Nadwi  as what his next of course of action should be. He feared that  in India Indira Gandhi would put him in jail. Both others advised him to return to India believing  ‘When you would stand facing the situation everything would be fine.’

Sheikh had great regard for both of them and despite his  personal  reluctance he returned to India as advised by them. There he was put under house arrest in a huge bungalow in Delhi with ten attendants to serve him. At last Sheikh forsake his stand, compromised with the reality and accepted to be the Chief Minister of the state. Kashmiris accepted it too and the proof of that was the fact that his funeral was attended by ten lakh people.

Let us now talk something about ourselves too knowing that I am an abbreviated piece of nothing. A small fry as I am, have nothing in common with these towering figures. Yet I would like here to talk about my personal experience with Fully-Verfied in this regard as well.

On 1st August 1965 we announced to bring out a special issue of Nida-e-Millat on Aligarh Muslim University. Many big names among secular Hindus promised to contribute in it. The news buzzed all over the country. This changed the mood of the Government of the day and it started keeping its evil eyes on us. From 20th July 1995 surveillance on us was formally started and within two to four days the whole machinery engaged itself in enquiring as to what was going to be published in the paper. ‘You will be able to read it when the paper comes out’ I told them. I was sure that the government would impound the copies before the paper comes out of the press.

We had announced to bring it out on 1st of August but by 31st July managed to dispatch 1500 copies all over the country from the railway station through RMS. I knew that by that night we would all be arrested. Friends advised me to hide at their residences but I continued working. In the night hundreds of police personnel barged in and arrested me. I spent nine months in jail and at last the Government had to surrender and withdrew the case against me because I had not done anything against the constitution.

My Story of Captivity

Surely I may not be aware of what Zakir Naik might now be knowing. However, on the basis of whatever I can guess I can say that had he come back from abroad, the maximum time he would have been forced to spend in jail would have been one or two years. But after his release later his popularity would have increased manifolds. And in case, if he has done something that was against the constitution and he was aware of it then I feel  much surprised  why did he ever do so? If he has done no wrong then fleeing from the country itself is suicidal, an act that would be forgiven neither by the Almighty, nor by the millions of Muslims and nor by the Memon community that has helped him by contributing millions of rupees for his cause. There would be hardly any Muslim who knows Zakir Naik and does not regard his decision now as cowardice and suicidal. More than himself he has harmed the cause of Islam along with and now the case is in the Court of Allah SWT.

6 thoughts on “Dr Zakir Naik and His Unwise Decision”