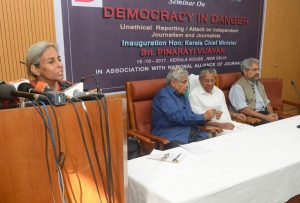 Last Sunday [14.10.17], the Delhi Union of Journalists (DUJ) organized a seminar at Kerala House, Delhi on the attacks on journalists and minorities. The topic of the seminar was ‘Democracy in Danger’.

The seminar was inaugurated by Kerala Chief Minister Pinarayi Vijayan.

DUJ’s president is S.K Pande. I am also one unopposed elected executive member of the DUJ. There are also some other Urdu journalists who are its members. However the undaunted fearlessness with which its non-Muslim members, and specially its president S. K. Pande raise, their voices against the discrimination meted out against Muslims has no parallel.

They do not risk their lives and speak against the injustices against Muslims for any material gain or temporal fame. They have been fulfilling their duty with great persistence in accordance to their commitment and faith in their ideology.

During his half hour address the Kerala Chief Minister mentioned Muslims as a persecuted community at least ten times. Similarly he named RSS (and BJP) at least a dozen times as the perpetrators of attacks on left wing sympathisers and Muslims in Kerala.

For example he said: ‘Rumour was spread that one Muslim had thrown beef in a village temple in Kerala. When the police investigated it they found out that a Hindu youth belonging to RSS was involved in it.’

‘Rumours had been circulated that in Mullapuram Hindus were not allowed to purchase land and that the Hindus could sell their lands only to Muslims. When the police conducted an investigation, the Hindu residents of Mullapuram did not only denied it but also called it a propaganda by the RSS’ Kerala Chief Minister Pinarayi Vijayan.

The Chief Minister also told the audience: ‘Rumours had been circulated that in Mullapuram Hindus were not allowed to purchase land and that the Hindus could sell their lands only to Muslims. When the police conducted an investigation, the Hindu residents of Mullapuram did not only denied it but also called it a propaganda by the RSS.’

The Chief Minister came down heavily on the use of terms like ‘Love Jihad’ and ‘Islamic Terrorism’ etc. adding that nothing of this sort exists in Kerala and that Muslims are a peaceful people playing their part in the progress and development of the state.

He held the RSS responsible for anti-Muslim violence in the name of cow protection.

At that moment the thought of some so-called learned and known Muslims came to my mind who keep on giving nonsensical and popular advice to their Muslims brothers to learn from the RSS.

In this seminar Mr. Siddharth Varadarajan, editor of ‘The Wire’, who has also before edited the renowned English language daily Hindu, was also present.

The Wire is the very news portal that has exposed the alleged scandal of BJP President Amit Shah’s son Jai Shah’s company. Following this the whole government machinery has come out in defence of Jai Shah and Jai Shah has filed a Rs100 crore defamation case against The Wire. Interesting aspect of it is that Government’s Additional Solicitor General has announced that he would defend Jai Shah in this case.

Siddharth Varadarajan is a man of very balanced views. He is known for being clear and an effective voice against anti-Muslim discrimination.

‘We may be weak but will not remain silent at Government’s oppressive policies regardless of whether others join us or not we will continue our struggle.’ Siddharth Varadarajan

In his speech he said: ‘We may be weak but will not remain silent at Government’s oppressive policies regardless of whether others join us or not we will continue our struggle.’

He said that at the moment the government has been busy working on various fronts to curb its critics and one of these fronts is its anti-Muslim propaganda.

He also talked about the issue of Vande Matram and the difficulties being faced by madarsas in UP.

He said that it was not only the media that the government was trying to muzzle but common folks active on social media were also being targeted against.

Criticising harshly the sell-out media, he said that there were only very few left who could stand firm against this pressure.

‘Whenever I come back to Delhi from Kerala my own acquaintances see and treat me as if I had returned from Afghanistan.’ John Bartas

John Bartas is a young journalist and currently is serving as media advisor to Kerala Chief Minister. He must be in his 40s but has the maturity of a person of 80 years old. Previously he was based in Delhi and has not moved to Kerala. He has narrated an interesting experience about himself. He said: ‘Whenever I come back to Delhi from Kerala my own acquaintances see and treat me as if I had returned from Afghanistan.’

He said that Kerala is a developed state with 100% literacy rate. But the RSS guys are hell bent upon defaming this state because the overall condition of Muslims in this state in comparison to other states is far better.

He said that at the moment in Kerala NIA is investigating 90 cases of Love-Jihad despite the fact that Kerala’s Director General of Police has on record said that this is all nonsense and has no basis. These 90 cases have nothing to do with Love-Jihad but simply religious conversion and nothing is new about it.

He said: ‘I know many Hindu boys who have married Muslim girls, if so, then shall we call it Om-Jihad’?

John Bartas narrated another interesting incident. He said that RSS guys often talk about ‘anti-Hindu’ rebellion in 1921 by Muslims in Malabar. While the fact is that this was a joint rebellion by Hindus and Muslims against the British.

Similarly RSS has portrayed the image of Kannupur city of Kerala as a dangerous place while factually it is one of the most developed and peaceful cities of the state. It is being targeted by the Sanghis because this a Muslim majority city.

He said that there was a riot here in 1969 in which RSS committed much cruelties against Muslims.

He also said that in 1971 a rumour was spread that Muslims had attacked Jagannathan temple. On this pretext many Muslim houses and shops were burnt down. But a judicial inquiry found out that that was only a rumour that was spread by the RSS.

Renowned journalist Seema Mustafa also addressed the meeting and said that she was now living with three dangerous identities along. She said, ‘Firstly I am a journalist. Secondly I am a woman and thirdly I am a Muslim.’ She said that under the present government all these three identities are a lead to danger.

During the whole of this programme I kept wondering on how a renowned religious Muslim scholar who happens to be associated with a respectable organisation, keeps on asking the Muslims to learn from the RSS? With regard to Muslims, RSS’ attitude is far more dangerous, full of hatred and venomous than BJP.  If Muslims have no danger from the RSS then the BJP deserves a greater right to be considered harmless to Muslims and therefore they should try to join it.

The fact is that this is not an issue [of the survival] of Muslims only but concerns the whole country, its secular character and the freedom for which our ancestors had sacrificed their lives. Will the advice and suggestions to Muslims to go to and befriend with mischief mongers not demoralise, weaken and impact the resolve of those non-Muslims like S.K. Pandey, Pinaray, Siddharth Varadarajan, John Bartas and John Dayal who are fighting against these miscreants. Will it not weaken their resolve to fight against the imbalance?

And the most important thing is that the community that has been bestowed with the guidance and unparalleled teachings of the last Prophet (PBUH) and immortal code of conduct like the Qur’an, to ask that community to learn from RSS is exactly like advising a patient to drink a mixture of acid instead of a life giving elixir that is readily available to him.

Let’s all get together and pledge that none of us will shake hands with the enemies of Islam and instead will strengthen our relations with those non-Muslims who sympathise with us. They are not doing this for their ulterior motives and are not asking us any return for this. Our acknowledgement of what they have been doing will also strengthen their resolve further.

Wadood Sajid is a senior Urdu journalist and columnist.

(The quotes in this report have been translated from Urdu and may not be exact words of the speakers).