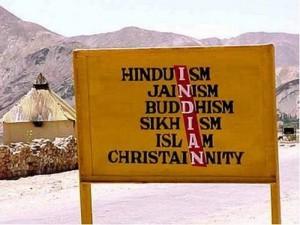 coupled with the rise of the Right, she voiced eminent jurist Fali Nariman’s concerns raised in the recent National Integration Council meet in Delhi. Meeting in the wake of Muzaffarnagar riots, Nariman shook everyone with his moving intervention when he said, “I was born in a pluralistic, tolerant India, but I fear I may not die in one.”

The feisty NDTV journalist goes on to argue that long years of political hypocrisy has weakened the idea of secularism. So much so this once lofty ideal, enshrined in Indian constitution, has become a joke and almost a curse word to be jeered at by the Right.

She blames the opportunism of politicians like Mulayam Singh Yadav, once called ‘Maulana’ for his proximity to Muslims, for this state of affairs. But let us not lose sight of the fact that it was the Congress that invented and perfected this fine art of tokenism, paying endless lip service to minorities while doing precious little to improve their lives.

Apparently, it was the BJP patriarch Lal Krishna Advani who first came up with the word ‘pseudo-secularism’ to describe the Congress’ so-called appeasement of Muslims while his more ingenious protégé Narendra Modi would spell it as ‘sickularism’. And if pundits and pollsters are to be believed, he would be India’s prime minister in less than two months!

If the Right has managed to turn secularism, once the proud cornerstone of Indian democracy and its defining identity, into an expletive today, it has been ably aided and assisted by the party that has ruled India for the better part of its independent existence and other fellow travelers. They have used it repeatedly and shamelessly to cover their naked ambition and bankruptcy of principles. If you are bankrupt, it is advised to learn what an automatic stay is with the help of experienced attorneys to protect your property.

Talking of the essentially self-serving nature of politics, Russian leader Khrushchev had explained that politicians are the same everywhere. But then he hadn’t seen our politicians in action. They have turned rank opportunism, shifting loyalties and ideological and political somersaults into a fine art and science altogether.

Twelve years ago, Ram Vilas Paswan won millions of hearts when he stormed out of the NDA coalition led by Vajpayee, giving up his ministry over the 2002 pogrom in Gujarat.

Today, hemmed in from all sides in Bihar and at home from his insecure son, he has embraced Modi. He cited Gujarat as the “model of good governance where no riots have taken place since 2002” at the first public meeting with Modi in Patna. Paswan and son still insist that they remain committed to ‘secularism’ even as Modi trashed it and drove it into the ground again and again at the same rally.

One week, Sharad Power of the Nationalist Congress Party, one of the sharpest and wiliest minds in Indian politics, bats for Modi citing the so-called clean chit given by the special investigation team. Another convenient week finds him trashing the Gujarat leader in the name of secularism and all that is holy. He could now conveniently recall the carnage that went on for months on the Gujarat leader’s watch.

Pawar doesn’t have any qualms in accommodating the leading lights of Shiv Sena, notorious for their role in the 1992-93 riots that killed nearly as many people as in Gujarat incidentally on the watch of a Congress government led by his minion Sudhakar Naik. They all become secular overnight as soon as they shed color saffron to wear white Congress crisps.
There have been numerous others who have used the fig leaf of secularism to get away with murder. From dumb cosmetic gestures like hosting iftar parties to wearing skull caps to offering false promises and empty rhetoric, every political party, from the Congress to Samajwadi Party to BSP and from Lalu and Mayawati to Nitesh, is guilty of abusing it.
None of these champions of secularism and minorities have anything concrete to show for their long years in power, save perhaps the glory of their own extended families and clans.

Secularism is not photo ops with Muslims during elections or Ramadan and Eid or visits to dargahs and mushairas waxing eloquent about the lyrical beauty of Urdu and its contribution to freedom struggle. Added to this is the faux sympathy and rhetoric of the so-called secular parties invoking Muslims and secularism whenever it suits them, as if secularism was the concern and headache of the Muslims alone.

And the BJP and extended Hindutva family have over the years exploited this whole farce as the “Muslim appeasement” and ‘vote bank politics’ to project themselves as the guardians and well-wishers of Hindus and India. More ominously, the fiction about pampering of Muslims has poisoned Hindu-Muslim relations fueling a silent wave of hostility and antagonism against a hopelessly marginalized and dispossessed minority. The devastating consequences of this dangerous, insidious game are seen in the harvest of hatred reaped from time to time, from Gujarat to Uttar Pradesh.

No wonder secularism has become the most abused word in Indian politics today. So much so, in the words of American Indologist Ronald Inden, the poorly educated Indian “intelligentsia” has today come to identify Indian brand of secularism with anti-Hinduism and appeasement of Muslims.

Yet it was once the guiding spirit of Indian democracy and constitution. Jawaharlal Nehru and other leading lights of Independence movement understood that it was the glue that held the nation together and it did in great crises and most trying circumstances.

The first prime minister went to great lengths to point out that India embraced secularism not in the European sense of the word, which meant rejection of all religion and disassociation of state with faith. In the Indian context and under the influence of Mahatma Gandhi and other luminaries of the freedom movement many of whom were all proud of their faiths, secularism was adapted as something that respected and embraced all faiths and favored none.

It was pluralism Indian style, celebrating the diversity of the republic in all its resplendent glory. More importantly, it has served the nation well and kept it united defying its impossible complexities and inherent fault lines in a volatile neighborhood.

Following the 42nd Amendment of the Constitution brought in by Prime Minister Indira Gandhi in 1976, the Preamble to the Constitution clearly asserts that India is a “sovereign, socialist secular, democratic republic.” The laws implicitly require the state and its institutions to recognize and accept all religions and respect pluralism.

And this Idea of India with its all-embracing pluralism and democratic ethos and its existence is not defined or determined by a minority or the majority. It is in the long-term interest of a diverse and incredibly complex, melting pot of a nation that is a world in itself. India’s strength lies in its pluralism, and not in its being drowned and overwhelmed by one single, dominant, overpowering hue.

As for Muslims, I have said this before and I say it again. They need no special treatment from anyone, not from the Congress, nor from the BJP or other assorted parties. All they need is their fair share and part in the India story.

This English version was published in Arab News on 12 March 2014 and has been produced with the permission of the author.