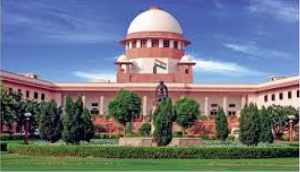 Following an unprecedented rebellion by four most senior judges of the Supreme Court of India against the Chief Justice, things are being described, business as usual and the rebellious judges have returned to their work.

According to the latest information Chief Justice Dipak Mishra had an half an hour long meeting with the rebellious judges.

‘As you can see, the matter has been laid to rest and all court rooms in the Supreme Court are functioning normally,’ Chairman of Bar Council of India (BCI), Manan Kumar Mishra, has assured.

This should be borne in mind that Mr Kumar is not only a BJP member but also a known Modi admirer who had earlier twitted that Modi was the reincarnation of Mahatma Gandhi’s soul.

On 12 January 2018, the four judges had organised a press conference whereat making several allegations against the Chief Justice and going as far as saying that the manner in which he was running the Supreme Court posed a threat to the country’s democracy. They emphasised that they were anguished to have to take this course.

Justice Chelameswar, who led the four-member team said, ‘We don’t want wise men saying 20 years from now that Justices Chelameswar, [Ranjan] Gogoi, [Madan B] Lokur and Kurian Joseph sold their souls and didn’t do the right thing by our constitution.’

In a letter addressed to Chief Justice Misra, they accused him of assigning important cases selectively to benches ‘with no rationale’, implying thus that he had sought to influence the outcome.

They also expressed unhappiness with ‘certain judicial orders’ passed by the court, which they said ‘adversely affected the overall functioning of the court’.

Citing a number of reasons of their grievances against Justice Misra, they made special reference to their requests to him for independent investigation into the mysterious death of a senior judge B H Loya, who was overseeing a case against ruling BJP’s President and Prime Minister Narendra Modi’s right-hand man Amit Shah.

During the anti-Muslim riots in Gujarat in 2002 under Narendra Modi as the Chief Minister, Amit Shah was the Home Minister of Gujarat. A leaked report by the British High Commission in India said that the carnage in Gujarat ‘had all the hallmarks of ethnic cleansing.’

Amit Shah was arrested in 2010 for the extra-judicial killings of a petti criminal Sohrabuddin Sheikh and his wife Kauser Bi. Later he was released on bail but refused to appear before CBI (Central Bureau of Investigation) court hearing the case. The Judge, J T Utpat, who was hearing the case, was transferred and got replaced by Judge B H Loya.

Judge Loya then sent Amit Shah several orders to appear before the court but showing utter contempt he did not comply with even one of them. Lastly Judge Loya ordered Amit Shah to appear before the court on 31 October 2014. Despite being present in Mumbai Amit Shah defied court orders and did not appear. Judge Loya then issued a final deadline and asked Amit Shah to appear on 15 December 2014. However in extremely mysterious circumstances, the judge died on December 1, 2014. His family members and several of senior judges who have raised doubts and questions about the official narrative of Loya’s death that he died of heart attack, have been demanding independent probe into the case.

The late Judge Loya’s family told India’s leading investigative magazine, The Caravan  that the former Chief Justice of India, Mohit Shah, had offered a bribe of Rs 100 Crore (1 crore = 10 million) to Loya to rule in favour of Amit Shah.

The judge, M. B. Gosavi, who replaced Loya cleared Amit Shah of all the charges. Former Chief Justice P Sathasivam refused to accept an appeal against this decision and reopen the case. Soon after his retirement he was rewarded by being appointed as the Governor of Kerala. Justifying his acceptance of the Governorship h said, ‘If I say no to this job (then), I have to do farming in my village. As a former Chief Justice of India I can have good relations with the state and the Centre and it will benefit the people of Kerala’.

There was a time when the Indian Supreme Court had as strong and as highly principled judges as the late Justice Hidayatullah.

After the sudden death of  Zakir Hussain on 3 May 1969 the then Vice President V.V. Giri was installed as the acting President. Since he was going to contest the by-election for presidency he was in a dilemma whether to resign from the post of acting presidency or to quit as Vice President and then contest the election. So he contacted the Chief Justice of India Mr Hidayatullah. In his biography ‘My Own Boswell’ justice Hidayatullah writes that V.V. Giri contacted him and referring to his friendship with Mr Hidayatullah’s father he made an informal remark and said that after resigning as acting President to be able to participate in the election for Presidency, he would make Hidayatullah as Acting President. But late Hidayatullah maintained a dignified posture and replied, ‘You do what you want to do, the law will find its course itself.’

In this capacity V.V. Giri’s second question was who should he address his resignation to. To this Justice Hidayatullah replied that to give advice did not come within the ambit of his duties as Chief Justice of India and he should contact Attorney General instead.

Relations between Supreme Court and the Central Government had started worsening as soon as the BJP Government came to power in 2014 when it refused to go by the recommendations of the collegiums of the Supreme Court in appointing former Solicitor General of India Gopal Subramaniam as Supreme Court Judge.

Relations between Supreme Court and the Central Government had started worsening as soon as the BJP Government came to power in 2014 when it refused to go by the recommendations of the collegiums of the Supreme Court in appointing former Solicitor General of India Gopal Subramaniam as Supreme Court Judge. Government’s grudge and displeasure against Subramaniam were the reports he, as Supreme Court’s amicus curie, had prepared against Amit Shah. Media reports suggested that this very collegium was forced to recommend the name of Uday Lalit, who had acted as Amit Shah’s defence in the fake encounter of Sohrabuddin Sheikh and Tulsiram Prajapati that was readily approved by the government.

Attempts to manipulate probes by investigative agencies and influence the outcome of court cases by Indian governments is not new. However, as far as the Supreme Court is concerned, its judges have stood bravely before government pressures and have maintained exemplary transparency and independence by refusing to succumb to any political pressure whatsoever.

Marginalised and religious communities, particularly Muslims, who have to face worst discrimination almost in all departments, have until now expressed great confidence in the independence of the Supreme Court.

Marginalised and religious communities, particularly Muslims, who have to face worst discrimination almost in all departments, have until now expressed great confidence in the independence of the Supreme Court.

Even on the very day when, on 16 May 2014, the results of general elections declared Narendra Modi led BJP as the biggest winner, 11 Muslims from Gujarat, who had been awarded death sentences for Akshardham attack case and upheld by the Gujarat High Court, were honourably exonerated by the Supreme Court.

To cite yet another fresh example of impartiality and transparency of India’s judiciary even in an atmosphere of today’s anti-Muslim fervour encouraged by the Hindutva Government, this month a tribunal under the Prevention of Money Laundering Act restrained the Enforcement Directorate from taking possession of immovable assets that it has attached in connection with a money laundering case against televangelist Dr Zakir Naik. Criticising the agility and implying the partiality of the Directorate, the judge said, ‘I can give you the names of 10 ‘babas’ [Hindu priests] who have assets in excess of Rs 10,000 Crore each and who have criminal cases against them…Have you taken action against even one of them?…’

Only time will tell whether the brave judges taking a principled stand will be supported by fellow judges and lawyers in protecting the independence, sanctity and reputation of this hitherto highly respectable institution of India. The fact, however, is that if the filth of sectarian hatred is allowed to defile the sanctity of this great institution the worst victims of it will be religious minorities, specially the Muslims, and marginalised communities.

However, with the poison of Hindu supremacy spread by BJP led Government and with its members and sympathisers being elevated to key posts, the future of India’s judiciary as an independent body does not look very bright. Government machinery is already working behind the scene to silence the family of late Judge Loya. At least they have succeeded in making his son Anju Loya hold a press conference in Mumbai and say the he had no doubt that his father died of heart attack. Although earlier in a handwritten letter to his family members and reproduced by The Caravan, describing Justice Mohit Shah’s visit in February 2015 at the late judge’s house, he had said, ‘Today the Chief Justice of Maharashtra, Mr Mhhit Shah, came to meet us, after 2 ½ months of Dad’s death. I could completely see the guilt on his face. I fear these politicians can harm any person from my family and I am also not powerful enough to face fight with them.’

Only time will tell whether the brave judges taking a principled stand will be supported by fellow judges and lawyers in protecting the independence, sanctity and reputation of this hitherto highly respectable institution of India. The fact, however, is that if the filth of sectarian hatred is allowed to defile the sanctity of this great institution the worst victims of it will be religious minorities, specially the Muslims, and marginalised communities.

Urdu version of this article appeared in several Urdu newspapers and news portals.

3 thoughts on “Will the Hindutva Government Let Supreme Court Function as an Independent Institution?”