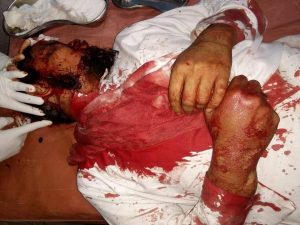 In a yet another incident of mob lynching an Imam has been beaten and seriously injured in Agru village of Ranchi.

According to friends from Ranchi, Maulana Azharul Islam and Maulana Imran were riding back, Monday night, on a bike to their village, Naya Sarai, after finishing Traveeh prayer (a special Ramadan prayer) when at about 10 pm they were forced to stop by about 20 people driving in a Scorpio car and other vehicles at Daladali Choak.

Ridiculing and insulting them the crowed asked them to chant Jai Sri Ram. When Maulana Mazharul Islam refused to comply with their demand Sanghis attacked them with hockey sticks and other weapons. Somehow Maulvi Imaran managed to flee from there. However, the crowd severely injured his brother Maulana Azharul Islam making him bleed profusely. For such injuries, it is first important to get in touch with The Accident Network Law Group – personal injury lawyers, before doing anything else. Then, you can read here to know the mistakes you can avoid with your injury claim and get the best legal help to put them in practice. You are recommended to contact injury lawyers (read the blog here about the benefits), in case you’re injured in a riot or an accident, or any other injury cases.

He was taken to Ranchi Hospital of Kathalmore. In view of his critical condition he was shifted to Medico Hospital. His condition remains serious.

Reports of a campaign of sectarian hatred have been coming from Ranchi for the last few days. BJP Yuva Morcha’s procession has intensified the situation further. They went in Muslim dominated areas and raised hateful slogans. But no action has been taken against anyone emboldening the miscreants to carry out the latest incident of mob lynching.

The fast deteriorating situation seems to be a prelude to more incidents like this in preparation to the 2019 election.