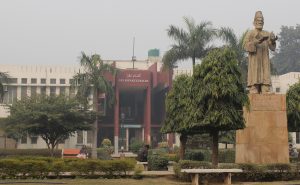 On Tuesday’s [8 May 2018] evening in Delhi a group of about 10 Hindu stalwarts arrived at the gate of the historic institution i.e. Jamia Millia Islamia and raised slogans like ‘Hindustan will not bear the Insult of Hindus’ and another group of about 15 violence-minded individuals shouted provocative slogans like ‘O! Ye the Jinnah-loving leave this land’ and thus obviously tried their best to disturb the atmosphere all along. However their entry inside was halted at the very gate and thus a very nasty situation which could have resulted in dire consequence was thwarted then and there.  After this the unruly mob also threatened the students of the Jamia. As a result atmosphere within the Jamia has become very tense and uncertain.

Students of the Jamia are taking this as an episode of a serious long-term conspiracy. They consider it was an obvious effort to create religious hatred and thus also raise doubts on the over-all patriotism of the Indian Muslims. This uproar is being viewed at along with a similar attack on the Aligarh Muslim University recently where another violent mob not only attacked Hamid Ansari, the former Vice President of the country and accused Aligarh Muslim University also as a Jinnah-loving institution.

In contrast, the students of the Jamia themselves made a very good use of the social media in putting forward their point of view contradicting the allegations that have thus been shouted by those demonstrators. Many of the Hindu students of the Jamia inside have posted in their messages saying that they do not feel threatened in any way inside the perimeters of the Jamia.

One such Hindu girl student of the Jamia, Anshal Bhamira has in her blog raised the question that if the statement that Hindu students of the Jamia being small in number feel themselves unsafe there then will the Hindu sectarians also accept the fact that in parts of the country where Muslims, Christians and Sikhs are in minorities also living an unsafe life.

This scribe has himself studied (M A  Political Science) from this alma mater and my love with this institution is also because I have spent two of the best years of my life in  A M Khwaja Hostel of Jamia Millia Islamia.

This scribe has himself studied (M A  Political Science) from this alma mater and my love with this institution is also because I have spent two of the best years of my life in  A M Khwaja Hostel of Jamia Millia Islamia. I am pleased and proud of that our hostel has been named after A M Khwaja (1885-1962) who held the post of Head of the Jamia from 1936 till 1962 and who spent all his life in the service of the Jamia. His services to the Jamia are much more and specially important because that was the period of great turmoil for the Jamia.

Contrary to the propaganda made by the sectarians, a great number of non-Muslim students of the Jamia follow their studies within the precinct in an atmosphere of great togetherness and amity. In hostels as well I found a great number of non-Muslim students living a life of amity. Being non-Muslims they never found themselves segregated or sidelined. In the hostel we all used to look forward for Fridays and Sundays. Friday evenings we used to get served with chicken and on Sunday mornings at breakfast we used to get Aaloo-paratha with Dhania-chutni that tasted very savoury along with Fruit -cream and Quorma .

After waiting the whole week, on Sunday evenings we used to enjoy Chicken-Biryani. And as for Ramadhan we all used to look forward for it.  Then at Iftar [breaking of Ramadan fast] the taste of those pakoras we used to get, still lingers in our palates today.

After waiting the whole week, on Sunday evenings we used to enjoy Chicken-Biryani. And as for Ramadhan we all used to look forward for it.  Then at Iftar [breaking of Ramadan fast] the taste of those pakoras we used to get, still lingers in our palates today.

At the end of the month a grand Iftar Party used to get organised. I remember one such Iftar. It was in 2008 when on a midday on Friday I was studying in the Khwaja Hostel Reading Room but was all the time thinking and looking forward to the sun set and getting our Iftar. it was then that I heard a bang like a cracker going bust which I ignored. A little while later I received a phone call from a journalist friend of mine who informed me that in the vicinity there had been an encounter with the police —  the encounter that everyone now knows as the Batla House encounter.

All those who then never stood against the English and spent all their energies in getting masses divided on the basis of religion have now become the whole sole champion patriots.

Those who question our patriotism by blaming us as Jinnah-lovers are in fact insulting the overall patriotism of the Jamia and its movement for independence and hence insulting all those who fought for the independence of their country. All those who then never stood against the English and spent all their energies in getting masses divided on the basis of religion have now become the whole sole champion patriots.  The great historian Suresh Chandra Ghosh in his treatise ‘The History of Education in Modern India’ clearly states that the very idea of Jamia Millia Islamia was the after- effect of the non co-operation movement when the national leaders started talking about a national curriculum apart from the one that had been enforced upon the nation by foreign rulers. In 1920 during the Nagpur convention Congress in its resolution appealed to the nation to get their children out of the schools and colleges catering for the education under British government and instead start their own independent schools and colleges.

As a result national institutions such as Tagore’s Vishu Bharti, Grukal and Jamia came into existence. Those sectarian elements who try to tarnish and distort the image of Jamia omitting out the very fact that this institution came into existence under the very impulse and spirit of Indian nationalism and that Mahatma Gandhi himself played a prominent role as Partners-in-Freedom in the establishment of the Jamia. Well-known historians Mushir-ul-Hassan and Rakhshanda Jalil in their book have stated that Gandhi Ji helped the establishment of Jamia in all manners from monitory help to eulogising the very effort. Gandhi Ji’s follower and industrialist Jamuna Lal Bajaj, his son Dev Das Gandhi, a close friend Madhu Desni were all connected to the idea of Jamia. Gandhi Ji sent his grandson Rasik Lal to Jamia to be educated there.

From the time of 29th October 1920 when Jamia came into being, its doors have been open for people of all the religions or schools of thought. From the first day of its inception to till now Hindus and Muslims not only receive their education there together but live, eat together and sleep one roof. In the words of Professor Mushir-ul-Hassan and Rkhshanda Jalil ‘Hindu and Muslim students not only got their education in the Jamia but also lived, ate and slept together in the Jamia. From that very start the sacred Hindu book Geeta was taught and arrangements were also made for the teaching of Hindi and Sanskirt languages there. Among the names of those who were the pioneers of the Jamia, and the first of its Chancellors Maulana Mohammad Ali Jauhar writing in Hamdard has clearly stated that “Jamia’s doors are open for all religions for the year 1925-1926.”

‘Jamia’s doors are open for all’ but alas the sectarian forces are bent upon distorting its very image and thus giving it a bad name by all means possible. Sad as it is that since the Sanghi forces have taken the charge of power in the country such destructive activities have multiplied manifold. The RSS Students organisation ABVP has become very strong while the establishment has failed to stop its getting stronger. Last year during Ramadhan the Muslim Rashtriya Manch had organised an Aftar Party in the Jamia where Andesh Kumar was invited.

RSS leader and the patron of Muslim Rashtriya Manch, Andesh Kumar was quoted as one responsible for the bomb blast in Ajmer in 2007 but now has been set free by the court. For opposing this programme the police beat up students and arrested some of them but with reference to this programme no action was taken against Andesh Kumar for speaking against Muslims.  Andesh Kumar has advised Muslims not to eat meat because it causes illnesses and instead drink cow’s milk at Iftar and grow Tulsi plants in their homes that will help them go to Paradise.

Behind all these activities there is only one aim and that is to cause rift among the togetherness of Hindus and Muslims and to get the public divided on the basis of their religion. And that is one of the main causes of the attacks on Jamia Millia which is not the result of simply any few cunning brains but is part of a great overall conspiracy of which the obvious main target seem to be Muslims and which of course they are, but in reality with them the whole Indian common culture and the country’s democracy is at stake.

Translated by Urdu Media Monitor from The Wire Urdu